Well, it's Sunday so it's update time.

I've managed to finish painting them at last. They've taken a bit longer than I'd hoped but they're nearly done now. I just need to check them for any touch-ups that need fixing then give them a coat of Klear/ink. Tomorrow I'll stick them on their bases. I'll leave adding the basing texture until later in the week when I will know if I actually have time to do that. 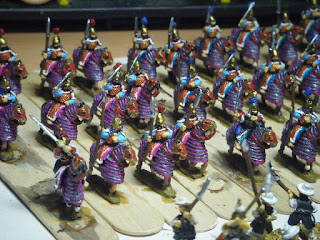 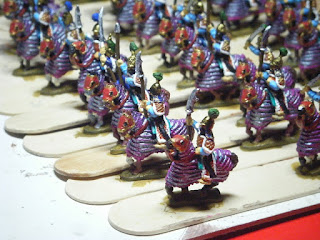 I've been working on the four command stands for the past 2 days, doing little bits as a break from the cavalry. I'll continue doing that while I'm painting up the foot. 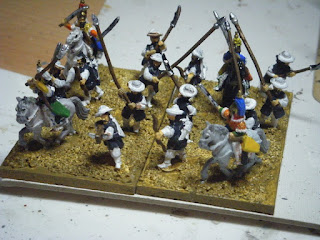 I've had 2 more deliveries of Piratical Plunder this weekend and had an email to let me know that my order from Rebel Minis has shipped. All the packs are of 8 figures, hence the sub-title I've used.

Some Marlburians from Essex Miniatures: 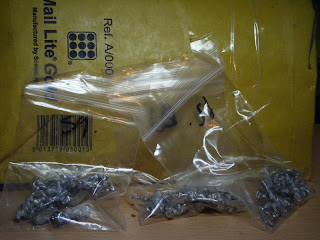 A goodly (badly?) crew of pirates from Peter Pig: 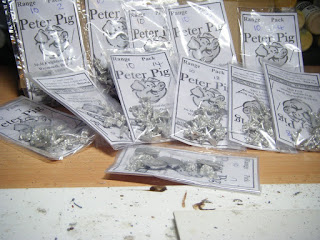 Markus - you'll be delighted to know that one of the poses in the "Pirate Characters" pack has not only a peg leg but also a parrot on his shoulder.

Imagine my shock yesterday when I got a Facebook message from Henry Hyde asking me to email him about an article. Our exchange went something like this:

HH - Hi Tamsin, can I ask a huuuuge favour from you?  Could you dig out photos of you Swiss pikemen and do a write up of how you painted them?

Me - errmmm, maybe, but I'm in panic mode painting right now to get an army finished that I'll be using in a tournament next weekend so might not have the time....

HH - that's greeeaat Tamsin, you're such a star for agreeing to this. I'll look forward to getting your photos and musings.


Well, how could I refuse an opportunity like this? So, on top of everything else I've got to do this week I will also be going through the pics I took of my Swiss pikemen, selecting ones to illustrate different stages of the process and doing a write-up. If you're at Campaign in Milton Keynes next weekend, pop over and say hello (even better - bring coffee) to the frazzled looking redhead in the FoG:AM tournament area!