Before the army review, a quick workbench update. The hussars did get put onto painting sticks last night, so were ready to join the dragoons and horse grenadiers for priming with the airbrush this morning: 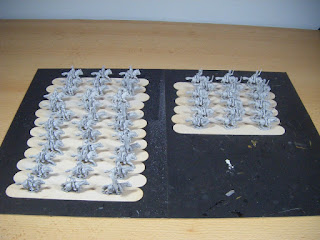 Apart from the priming, today has been quite light on the hobby front. All that's been done is to stick the hussar general group plus the horses and drivers onto painting sticks and assembling the two wagons. I'll prime them tomorrow evening, then on Tuesday I will probably make a start on the horses: 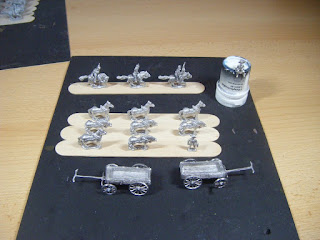 Anyways, back to the Army Review. Today I bring you my collection of Vikings and Saxons/AngloDanes for Saga. They are a mix of Wargames Factory and Gripping Beast plastics (and one Gripping Beast metal figure). 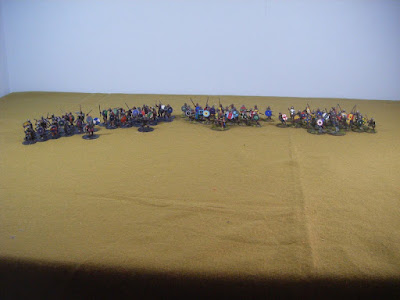 I'm pretty sure that I'll be rebasing all of these at some point, so that I can use them for ADLG and maybe other rules as well. If I base them in 3s, that should give me flexibility to use them with a range of rules. 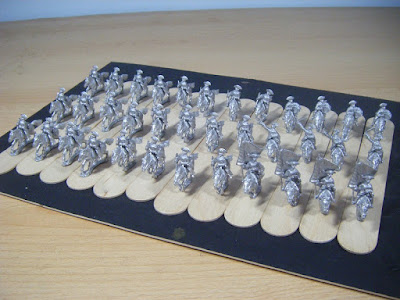 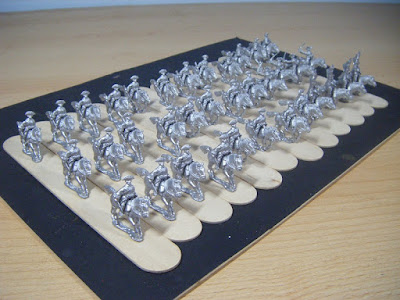 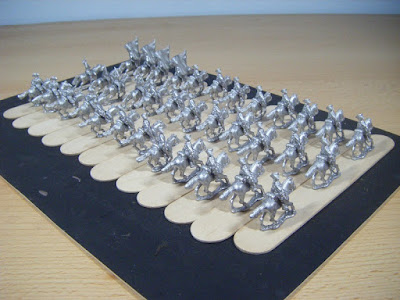 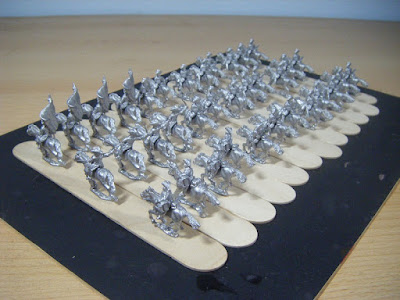 The two regiments of hussars are prepped and in the soapy wash tub at the moment. I'll be rinsing and drying them after this post - they might get stuck onto painting sticks tonight, but more likely tomorrow.

I've just prepped the "hussar" general's group - Russian generals, like most generals of that era were responsible for their own uniforms. I figured that some dashing young Count who's been promoted to general might want to cut a dash and base his uniform on that of hussars to make the young ladies in the court at St Petersburg swoon after him.

I'm currently in the middle of prepping the two wagons - they should be done shortly and ready to go into soapy water overnight with the hussar general's group.
Posted by TamsinP at 20:23 3 comments:

I've decided to jump around a bit between periods to break things up a little, so today is the first of my Salutesville posts. Simply because I took pics of them first, I'll kick off with Salutesville's "Finest", the Police. It's also a good opportunity to show off some of the buildings and diecast vehicles in my Mob Wars collection. 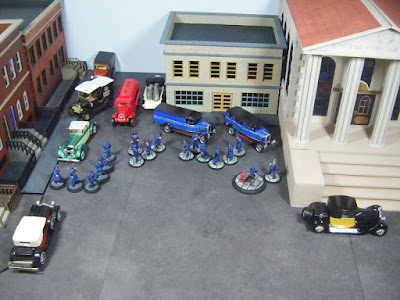 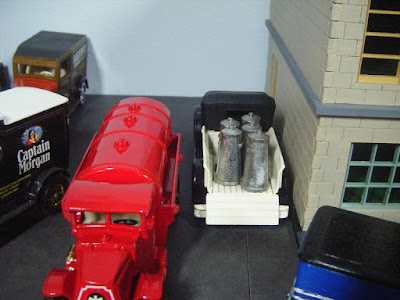 As they fit in best with the cops, I've chosen to include the other representatives of the forces of Lora Norder in this post: 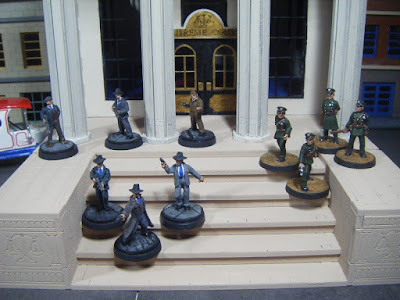 The figures are a mix of Pulp Figures (cops), Dixon (cops), Blue Moon (cops and G-Men) and Copplestone (the Bulls). The cops will be getting some reinforcements - I've got an armoured car and tank that need a little bit of finishing off, plus there's a harbour patrol launch for them to paint up at some point. There are two more police packs in the Pulp Figures range which I might buy at some point - I'm thinking of doing them as Court officers in grey to distinguish them.

The buildings are from Sarissa Precision apart from the courthouse which is from TT Combat.

After that brief interruption for new shinies, today I return to the series of Army Reviews and move onto my 28mm collections. There aren't as many of these, both in numbers of armies and numbers of figures.

I'm kicking off the 28mm with my Saga Normans: 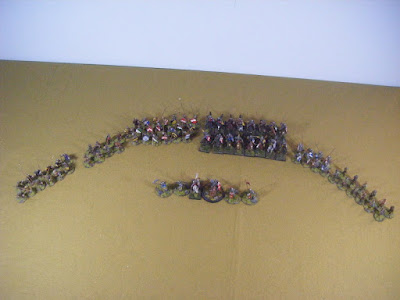 All the figures here are from Conquest Games - mostly plastics but some metals (archers, crossbowmen and the Dux).

As I very rarely play Saga these days, I'm actually thinking about rebasing one or more of the armies for ADLG. I haven't decided which yet though.. One possibility is to keep the metal figures here for Saga and rebase the plastics for ADLG. Of course, then I'd have to buy some metal Normans for the warriors and hearthguard...
Posted by TamsinP at 20:59 10 comments: 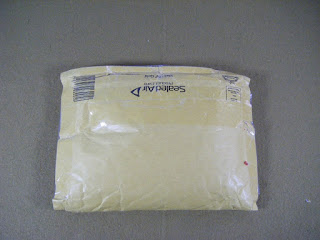 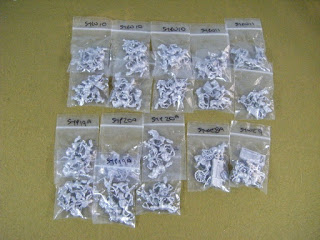 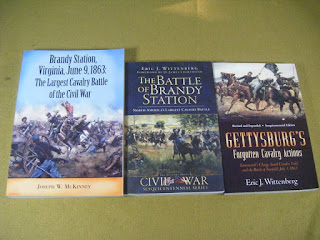 I needed a break from posting last night, and thought that you good folks probably could as well. But I'm back with the next of my series of army reviews.

Tonight I must confess to a state of embarrassment. I painted the bulk of the army about two and a half years ago but still haven't finished painting the commanders, artillery, dragoons and light foot. Or the camp. Or the ship. OK, the ship is actually finished for painting, maybe some detailing needs to be done. And the crew would need painting. What the ship really needs though is the masts, sails and rigging. I'm thinking this project needs me to dedicate some time to it later this year. I've got all the bits I need. Well, I might need to buy another pack of pirates with firearms from Rebel Minis, but that's it.

Well, it must be time for the piccies: 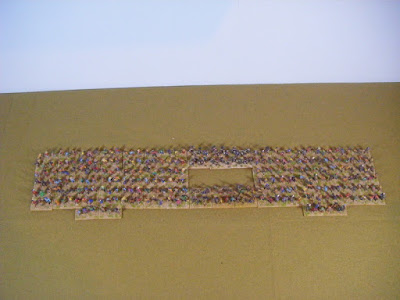 I went for using the Pyrats and Skeleton Crew for the veterans, but could use some of the "Disciplined" bases if I want an all (living) human army - that's what the two 4-figure bases in front are for, to help distinguish them.

The figures are a mix of Blue Moon and Rebel Minis. Painting them was fun, but a bit of a slog as I did them all in one big batch to help get the variety of flesh tones, hair and clothing colours. I think these were the fist figures where I tried the "Ian Willey" basing method - glob thick paint (in this case craft acrylic rather than household emulsion) on the bases and then drizzle the sand mix on top. The thick paint binds the sand much better than PVA does, making drybrushing much easier.


These are the last of the 15mm for now (I do have some odds and ends to post later). The next reviews will be my 28mm armies.

Today's review is of my first "proper" (ie historical) army - 15mm Sarmatians. You know, the big scary block of big scary men on big scary horses with long scary pointy things (or BSBoBSMoBSHwLSPT; or the BSB for short!). I haven't added to the army for a couple of years and there are still a load of figures to be completed at some point - the horses are done, but I still haven't finished prepping the riders, let alone painting them!

I've also got some Scythian heavy cavalry and command group sitting in a drawer part-painted. I really should finish those at some point. 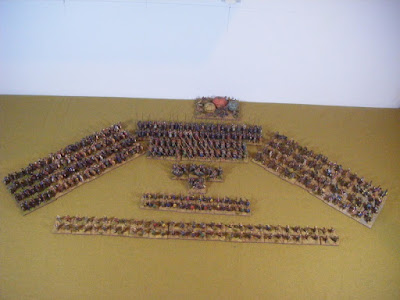 It's certainly interesting to see how my painting and basing has developed over the years since I painted these. All the figures here are Donnington Ancient & Moderns. For the cavalry with lances and spears the worst part was having to drill out the hands. I think I only sunk the drill bit into my own hand a few times...