What a truly popular prize this one was - 240 entries (including bonuses for poetry and pimpage) from 67 individuals!

Anyway, the spreadsheet column of names was sorted into alphabetical order, copied to random.org and the words "Hocus Pocus" said (or whatever the site does to randomise them) and a winner was found: 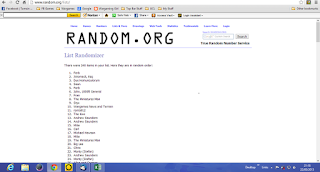 Congratulations Ferb!!! Please email me (use the Kontactr link underneath the Posties Rejects logo) with your address, and I'll get them sent out to you.

What else has been going on?

Gordon is taking a Later Polish army to a tournament this weekend and wanted a practice game beforehand. As the only blood my Swiss pikemen had seen was mine on the end of their pikes, I volunteered and duly turned up with a 650 point army that should have been a good match against a cavalry-heavy army.

Unfortunately, Gordon discovered on arrival that he'd accidentally picked up the wrong bag. Instead of rules, dice, measuring sticks, terrain and 650 points of Poles he had 850 points of Classical Indians. Rather than cancelling we agreed to play on and Gordon worked out a 650 point list he could use. He won the initiative and selected b****y "Tropical" as the terrain type! Just what an army of Swiss pikemen want to be fighting in. Here's a pic of the table:

Absolutely brilliant. Terrain that slows my heavy foot down and severely disorders it but barely affects the Indians' medium foot.

I'll do an AAR later, but the abridged version is that I scraped a narrow 12 to 8 win (I'd lost 3 BGs broken and my camp; Gordon had lost 5 BGs). Most of my fighting had been done where my BGs lost dice due to severely disordering terrain where their pikes didn't count for combat factors, so it was quite a surprise.


The Mystery of the Blue Moon

I'd been waiting almost a month for my Blue Moon pirates order from Old Glory UK to arrive. Yesterday I had a package in the post which contained 4 of the packs from my order, but no packing slip or note to say where the rest were. I was planning to contact them this evening to ask about the rest of the order.


This morning I got an email from them to let me know that Royal Mail had returned a package because I hadn't collected it. As I never got a "you weren't in" card, I didn't know it was waiting to be collected. After mutual disparaging of the Royal Mail, they are sending the package out again (to my work address this time) so I will hopefully get it on Friday or early next week.