Last Monday night I got back my Nubians into the club's ADLG competition with a game against Dave A's Persians. He won the initiative and chose to attack me in "plains" (roughly translates as agricultural).

Having won the initiative, Dave's army advanced rapidly, but stayed just out of shooting range of my massed bowmen. 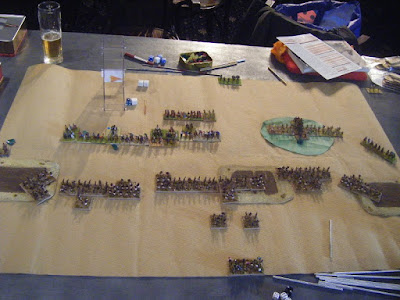 In my turn I advanced so that I was just inside shooting range and loosed some volleys off - I did inflict some damage, but not as much as I'd have liked. 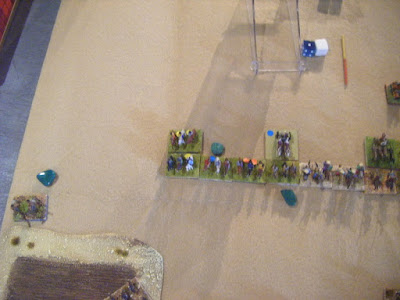 Unfortunately, being just inside shooting range meant that I was also inside charging range of the Persian cavalry and scythed chariots on my left wing and centre. 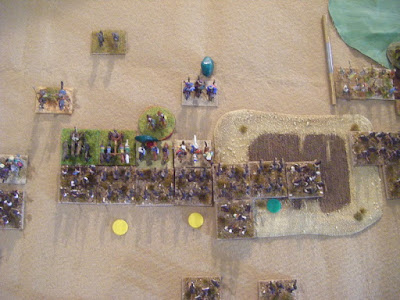 Meanwhile, my right wing archers were teeing up to get slaughtered by cavalry, swordsmen and an elephant... 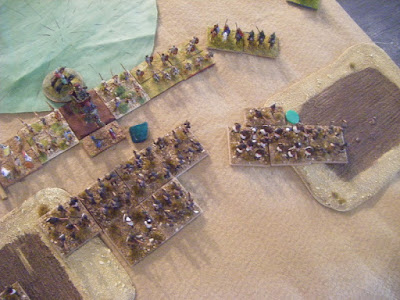 I didn't have many troops not engaged in melee for my turn, so not much movement. However, I managed to destroy the scythed chariots (sadly not worth any attrition points) and do some more damage to the cavalry with the general. But one element of archers got wiped out. 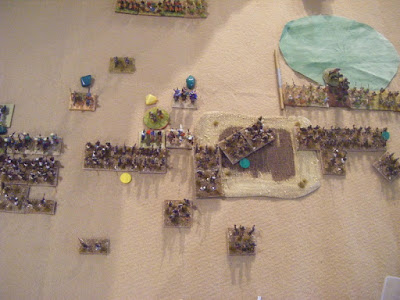 On my left wing, the archers had killed off the light horse who had tried to sneak around the flank and were now switching their efforts to the light horse behind the cavalry. Yup, the cavalry who were getting beaten up by bowmen in the open. Actually, I forgot to say that the two units on the right (with white kilts) are elite medium foot swordsmen. 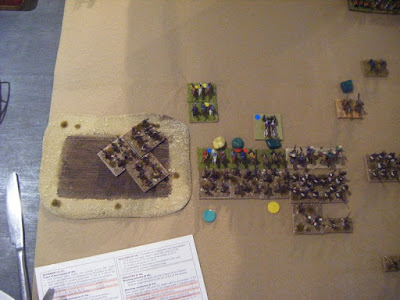 Over to the right wing where Dave's swordsmen and elephant had charged and wiped out a whole bunch of my bowmen. 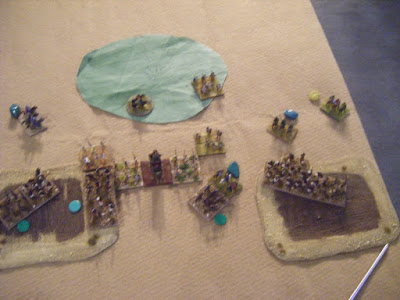 In the centre he had disengaged his battered cavalry - which meant I couldn't shoot at them this turn. 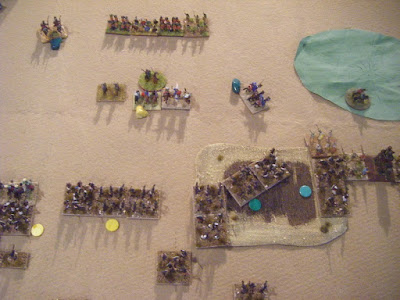 Back to the left wing where one of his cavalry units had finally broken a unit of elite swordsmen. 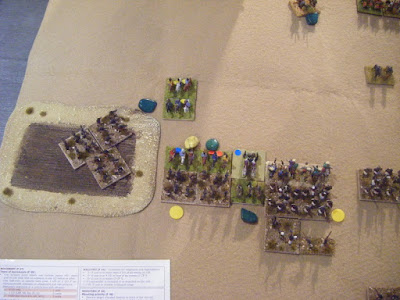 On the right wing, I'd lost another unit of bowmen, but some elite swordsmen had hit some severely hurt cavalry in the flank. 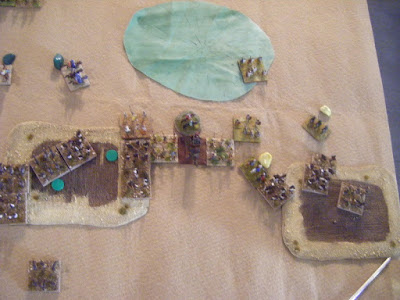 On the left, some javelinmen had finally got into position to join the combat with the cavalry, sounding the deathknell to the end unit. 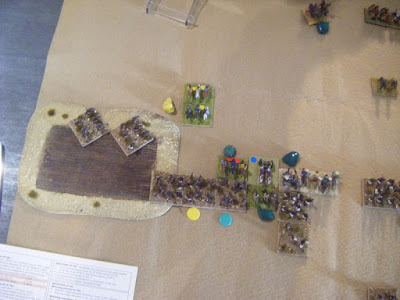 Sadly not quite in time as I'd lost enough units in this turn to break my army. 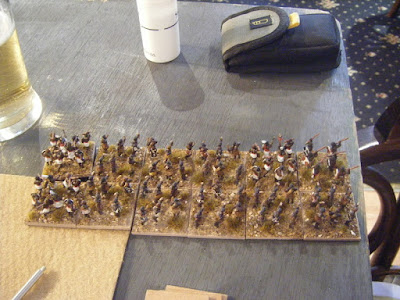 
Thursday's game was against Clive's host of Carthage. I lost spectacularly - 36 points from 28 vs 4 from 24. It didn't help that I'd lost the initiative and Clive decided to defend in "plains", that the only piece of terrain on my half of the table was a plantation right on the left edge, that I stupidly didn't consider that Clive might send his cavalry command on a flank march to come in on my right, that there were no troops facing my left wing so they would have to do a long march to get anywhere useful, that I had really awful dice all night and that Clive's flank march came in on his second turn, leaving me with no time to redeploy to deal with it. oh well, such is life...

And I'm back to blogging. Sorry for the silence on here for the last few weeks. I've had various things keeping me occupied which have meant a distinct lack of hobbying, but that's all over now.

In the past week I have had two games of ADLG - I forgot to take my camera for Thursday's game but did get pics of Monday's game - I'll be writing up an AAR next and will schedule it to post tomorrow night. I've got games set up for the next two Mondays and Thursdays and will try to do AARs for all of them. These are for our club's competition.

This afternoon I actually got back to the paint desk - just putting a basecoat of burnt umber down on the dice holders I showed primed in the last post. I'll drybrush them and add some static grass on Tuesday night. I also need to do a priming session with the airbrush this week.


The Future of this Blog

During my absence, I have been giving some thought to my blogging and made some decisions. Rather than posting constant WIP pics, I'm going to do a single "on the workbench post" each week and will only do posts of figures once they are finished. I think that is better overall.

I'll also do AARs (when I remember to take my camera and take pics) and show reports.
Posted by TamsinP at 23:15 14 comments: