Back from Campaign; Korean Camp

Hi all, I'm back from Campaign now and what a weekend it was. I've downloaded the pics from my camera and will try to write up some AARs tomorrow (I deliberately booked the day off work). I am feeling rather tired, as you can imagine.

* my clubmates were amazed that I'd beaten Bob as he is a very, very good player and my win resulted in me receiving a standing toast when we went for a curry on the Saturday night! There are some tales of Bob's truly atrocious dice rolling to be told in my AAR.

** this round was particularly important as my team were fighting against our clubmates and the team result would determine who ended up in last place. My team were 1 point behind going in and the results were as follows:
Simon vs Richard - 24:1 loss
Me vs Mark - 12:8 win
Andy vs Jerry - 25:0 win


I did meet up with a couple of people from the blogosphere while I was there:
Mike from Trouble At T'Mill who was there running a fun-looking participation game involving hot air balloons suspended from the frame of a small garden marquee.
Simon from Iron Mitten and his lovely better half (Kath? I'm terrible with names) who were there in C17th costume with Prince Rupert's Blew Regiment of the Sealed Knot. Poor Simon must have been boiling in his uniform and armour.
Doug (sorry - not sure if you have a blog) who was there with a 54mm Stalingrad demo game which looked fantastic.


Here are a couple of pics I took of the good (?) pirate ship "Madaxeman's Revenge" (I don't know if he's actually given it a name, but it seems appropriate) and of brilliant cohesion markers: 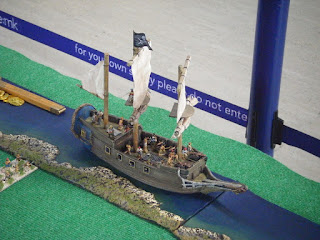 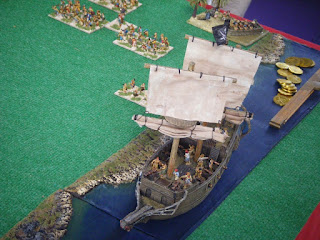 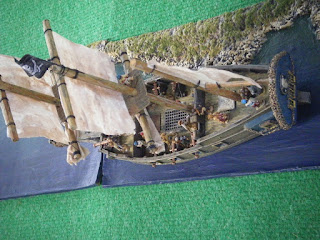 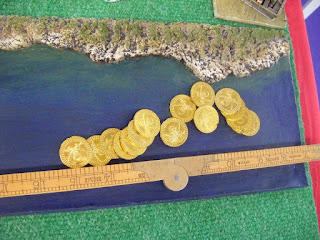 Teh ship is the 8-gun Barque from Blue Moon/Old Glory. He got the tokens off Ebay but I expect you can find them in the kiddies section of poundshops.

Finally, the Secret Project which was the supply camp for my Koreans can be revealed. 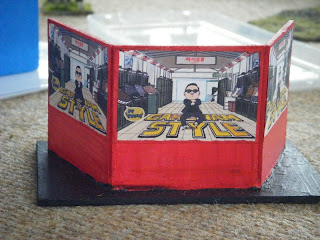 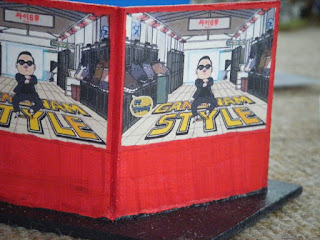