That was the bleary-eyed and scraggy-tailed conversation I had this morning, a few minutes before heading off to work.

"But what was in this heavy parcel?" you ask. Well, obviously this was: 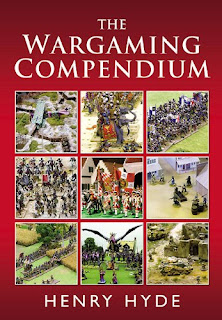 but also a few Ospreys, "Achtung, Schweinhund!" and an ultra-sonic cleaning bath. the last will be used for a number of purposes - cleaning jewellery, assisting with stripping paint from minis and if I ever get into airbrushing for cleaning the parts. But let's return to the main event.

After a much prolonged gestation (how many times did Amazon put it up for pre-order then take it down again?) and then delays in actually getting the printed copies to the publisher, Henry's masterpiece is finally available for sale to the great unwashed grateful public. How Henry found time in between editing issues of MW to buckle his swash and wrest the shipping containers from the pirates that held them up is beyond my knowledge.

I've got to admit that so far I've only had a quick leaf-through of the book, but I'm definitely impressed. As one would expect from Henry, the illustrations and photographs are superb (and lots of them). The text is printed in a large enough font that it should be easy for everyone to read comfortably, with good line spacing. Equally impressive is the "heft" of the book - 1.47kg of glossy goodness. And it is just the right height to slip under that wonky table leg (just kidding Henry!).

I'm definitely looking forward to reading this at home over the next few weeks. It certainly looks to be well worth the wait, the weight and the full cover price of £35 (although it is available for £16 on Amazon).
Posted by TamsinP at 21:18 27 comments:

Still too hot - might as well play Saga tonight

Well as it is still too hot to get any painting done in the evenings, I've agreed to turn up at the club tonight for some Saga loutery. We're hoping to get a couple of the 4-player scenarios played this evening. It's also a few weeks since I had a curry, so that will be welcome.

ps - I have remembered my camera. Now I've just got to remember to take pics during the games!
Posted by TamsinP at 10:47 14 comments:

Too Hot To Paint

I can't wait for it to cool down again. I haven't managed to do any painting since Sunday. When I got home this evening, just after 6pm the temperature in my flat was 29.5C. Four hours later.... 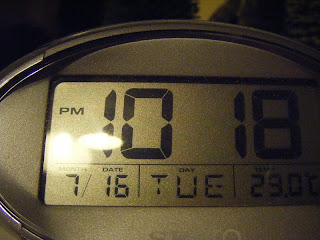 So, what's been going on? Not a great deal. I did pop down to Modelzone after work yesterday and picked up a few Vallejo paints (some new, some spares). I had a pleasant chat with the girl on the till who paints fantasy figures for pleasure. She thought it was cool that I was a wargamer.

Edwin over at "Thoughts of a Depressive Diplomatist" is having a prize draw to celebrate his 200th post.
Posted by TamsinP at 23:12 34 comments:

What a scorching week we've had here in the UK topped with an incredibly scorching weekend. The heat has left me feeling too worn out to paint during the week and yesterday I caught the sun a bit on the back of my neck which left me feeling slightly unwell later on so it wasn't until today that I managed to get any painting done.

Kev over at Kev's Wargames Cabin had a prize draw to celebrate reaching 30K page views. I'm obviously experiencing some good karma at the moment as I won. The prize was the Ludus Gladiatorus game from EM4 Miniatures which includes five pre-painted 28mm gladiator figures. This could be fun for filler games at the club.

I'd made pretty good progress last weekend on the Korean foot, which left me in a good position to finish them today. Of course, the heat didn't make things easy but I found that painting one colour then taking a break allowed me to take them all the way through. And here are some pics: 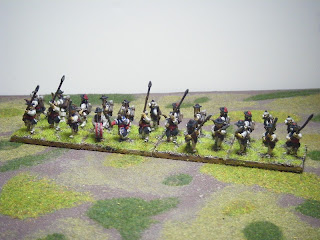 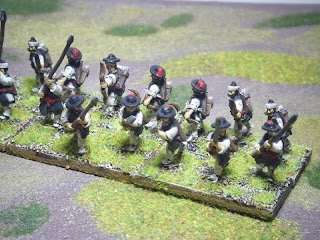 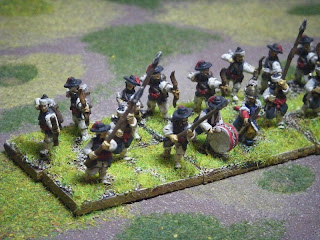 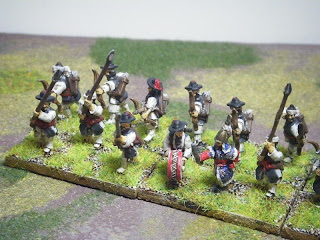 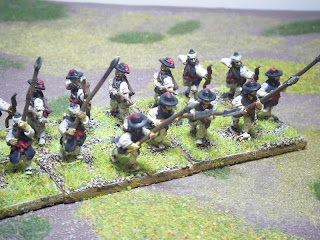 I've just got another six of these units to paint up plus the artillery and I can say that my Koreans are finished for now.

While I was doing the Koreans, I also did a few little bits on the figures I'm painting up for Donogh. I think I will make an effort to finish these off in the evenings this week. Pics of them as of now: 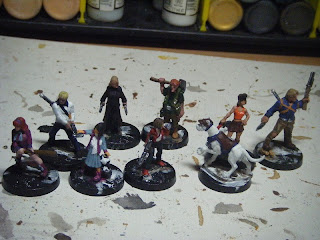 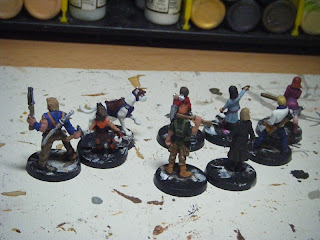 I am planning on playing Saga at the club on Thursday. There should be four of us, so Ian has suggested we try out the "Wooden Oaths" scenario. There is also a suggestion that on 14 October we should do a multi-player Battle of Hastings fight using Saga which sounds like it could be fun.

With Modelzone in administration, they are apparently selling off their stock at heavy discounts. I'm going to take advantage and pop down to the store on New Oxford Street (which they only opened at the beginning of June) to pick up some Vallejo paints, matt varnish spray and maybe a kit or two.
Posted by TamsinP at 22:23 17 comments:

I think it's worth posting my congrats to Lee for reaching 1 million page views over on his blog. 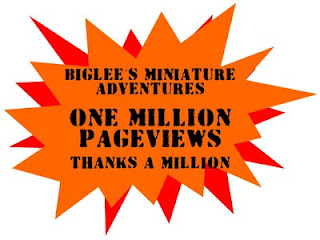 Nothing to do with the fact that doing this will gain me 5 bonus entries in his prize draw.

Those are some very nice prizes though. Not that I'm interested. Oh no, not at all.
Posted by TamsinP at 20:51 7 comments:

A couple of weeks back, I stuck my name in a prize draw on the Monsieur le Rosbif & Johnny Frog blog. The draw took place yesterday and I was one of 4 lucky winners. And this is what I won: 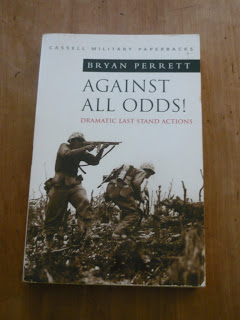 As the prize will be travelling across half the globe to reach me, I don't expect it for a few weeks, but I am looking forward to reading it.

I have been plagued with a combination of heat and insomnia this week, meaning I haven't done any painting until today. I forced myself to do a couple of hours this morning before it got too hot. I decided to make a start on one of my Korean units. If it cools down a bit more this evening, I might try to get a little bit more done on them.

Here's a piccy as I left them this morning: 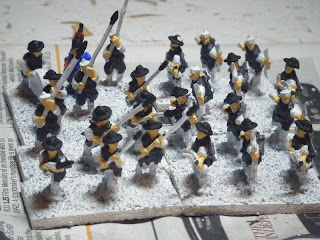 Well, this just came into my email box:


"We are releasing this crowdfounding campaing in Kickstarter.

Dark Skies is an aerial combat wargame, the miniatures are 1:72 (24mm)aircraft with ww1/ww2 aesthetics with a touch of fantasy, from lightfighters to huge flying carriers. There are 6 factions: The Kingdom ofEngland, the Germanic Empire, The Kingdom of Iberia, the Russian Empire, theGallic Duchy and the Foreign Legion (Mercenaries). Andy Chambers will do afinal edit of the rules and Plastcraf will do the scenery.


Whilst this isn't something that particularly appeals to my interests, I'm sure that some of my 426 followers may be interested, so I decided to post it for you.
Posted by TamsinP at 23:31 4 comments:

First up, Kev's Wargames Cabin is having a prize draw for reaching 30K page views. Incredibly, his blog has only got 70 followers at the moment but it's well worth following so head on over there and sign up.

Sorry folks - I forgot to pack my camera yesterday so there are no pics of yesterday's refight of Gettysburg: Day 1 at the club yesterday. You'll just have to make do with a very brief report.

Ian and I got to the club at about 2.30 to get everything set up. It took us about an hour to do the terrain. Following a short drinks break, we then spent the best part of an hour sorting through the troops for the starting deployments before we kicked off the game itself at around 4.30pm. Ian took the Rebs, so I ended up with the Union. Having only played Fire & Fury once before, the first couple of turns took a lot longer to play than they really should have done, but after that I was OK.

The starting deployment had Buford's Division supported by Reynolds facing off against Heth's Division. I opted for the old maxim "the best defense is a strong offense". This saw mixed results - I was winning on my left, but losing on my right where it didn't help that I rolled a natural 10 in one shooting phase causing 2 units to hit "low ammunition" status at a crucial time.

At about 6pm we were joined by some other players. Andy joined Ian on the Reb side; Geoff and Stan joined the Union. This was probably just as well as the union XI Corps were just starting to arrive on table and I didn't fancy handling that many troops all at the same time - 4 Divisions was quite enough for me, although there wasn't much left of Buford's cavalry by that time. A little later I transferred control of one of Reynolds' divisions to Geoff. Andy had taken over Hill's corps with Ian assuming command of Ewell's corps as it came on the table in the North.

We carried on playing until 10pm and had reached 2.30pm in battle-time. At this point in the game, the Union had formed a strong defensive line along Seminary Ridge and Oak Ridge, although a couple of Reb brigades had pushed the Union back off Oak Hill, but then had to fall back as fresh troops from Reynold's and Howards corps advanced. On the Northern flank, the union troops were falling back in good order to present a continuous defensive line with the rest of the army.

We called it at this point as a minor win for the Union. Hills' corps had been heavily delayed by my aggressive defense and there was no chance of the Rebs making it anywhere near their Day 1 objectives of Culps Hill and Cemetery Hill before the Union XII Corps would arrive on the table.

I think everyone would agree that the unit of the game had to be Meredith's Iron Brigade who had driven off two of Heth's brigades early on, then repulsed 3 successive assaults (the last one when they were down to 4 bases [spent] and disordered against a fresh 9 base brigade!) before being retired from the front line having achieved their aim of holding up the Reb advance while the defensive position was formed on Seminary Ridge.