Yes, that's right, I have hit the brushes again and done some work on the 6mm Union boys. Photos for proof: 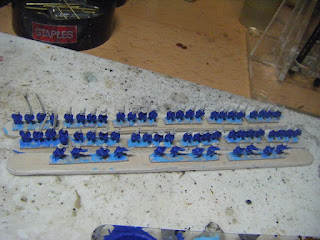 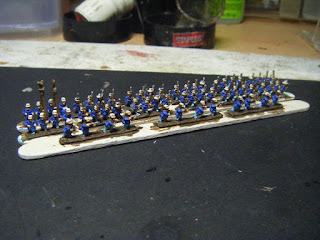 Another two evening sessions should see them finished.
Posted by TamsinP at 20:54 10 comments:

To report:
Absolutely no painting done this week.
Figure prep has continued.
Some more diecast vehicles *may* have been adopted... 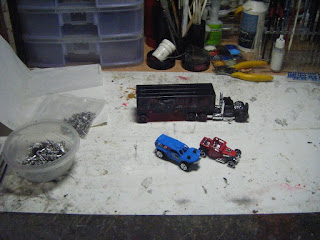 OK, "Some more diecast vehicles *definitely* have been adopted".

Over on the left of the picture you can see the pot of figures that have been prepped and a bag of figures waiting to be prepped. Since taking the photo, they have been prepped. That's all the Koreans done now. I also prepped the teddy bear adventurers from Northumbrian Tin Soldier. I'll probably do some more figure prep this week.

In the back right corner you can see the 6mm Union infantry I started a few weeks ago. I really must have a good go at finishing them this week.


Some close-ups of the new adoptions:

On Monday I'll be heading to the club to try out Star Wars Imperial Assault; just to see what it's like - I don't plan to get in on the action myself.

Sorry folks, but there's not a great deal to report on the workbench front. I think I've had a low-level cold this past week as I've been feeling a bit drained in the evenings. That in turn has meant I haven't been in the mood for painting.

I have, however, been prepping figures ready to go once my mojo kicks back in again. At the moment I'm prepping the Koreans - some light cavalry and a reasonable batch of levy (and some regular infantry) figures for the Righteous Army. I've got a few left to do, then I'll start to prep the SYW Russians.


There is some good news though - the fourth brother has been located and reunited with his siblings. 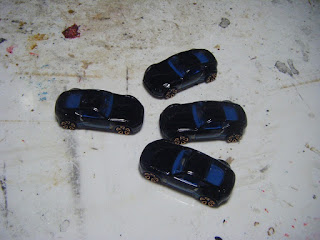 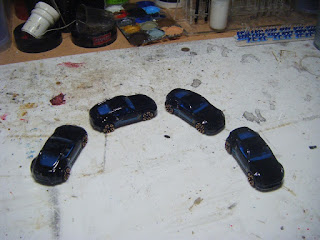 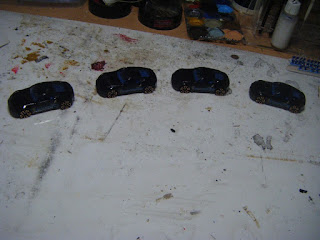 Hopefully I'll shake off this cold in the next couple of days and finish off painting those 6mm Union infantry that I started about 2 weeks ago.
Posted by TamsinP at 20:46 6 comments:

So, last night saw Simon and I playing Car Wars at the club for the first time in, errmm, let's just leave it at a rather long time indeed. And we didn't just get one game in, but three.

The games took place in a basic 4' x 4' arena with some solid barriers to block line of sight, provide cover and make manoeuvres a bit more difficult. The barriers were the inserts from a Figures in Comfort foam tray - a good way to use things which would otherwise be thrown out. The arena was set up with a gate at the centre of each side.

We were playing Classic rules, scaled up to 3x. 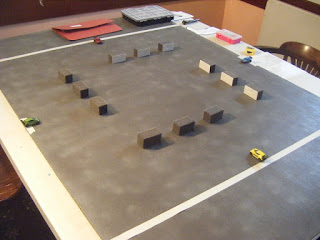 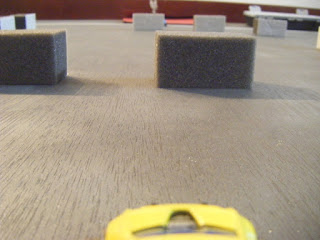 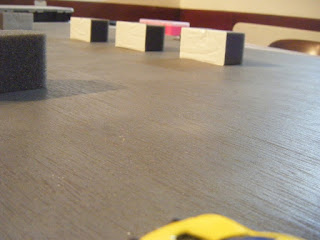 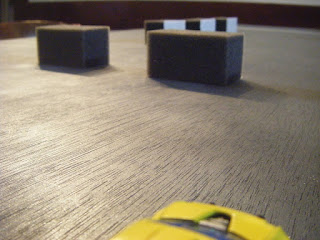 I took a long range shot at Simon's car. I knew I was unlikely to hit, but continuous fire against the same target gives a cumulative bonus on subsequent shots.


We both shot this turn, doing minimal damage to each other. The next turn would see us either closely passing or ramming each other.

We rammed each other. Head on. I was doing 45mph, Simon was doing 40mph giving a collision speed of 85mph. This was going to be nasty - 14 dice of damage each. 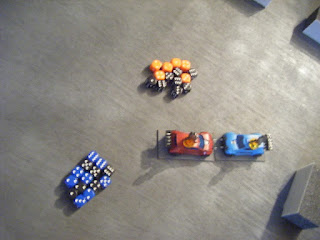 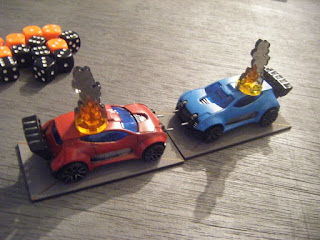 We each rolled enough damage to destroy each other.

One car each was clearly not enough to keep us busy and Simon thought we needed more obstacles, so we scattered a bunch of smoke and flaming oil markers and went with two cars each. Simon took blue and green, I took red and yellow. 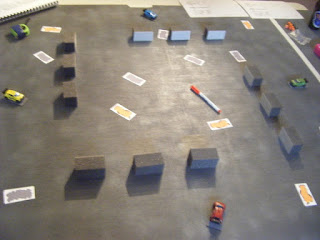 Sadly, sideswipes are the least effective ram - effective speed is quartered which left red doing just 1d6 of damage. And I rolled low! 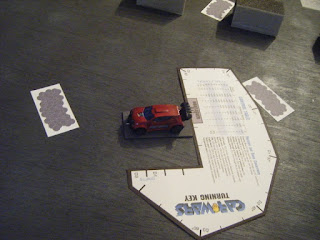 Red had got up to 60mph, took a tight bend and failed the control roll. The crash table result was a severe skid. Yellow was chasing a fast-moving Blue. 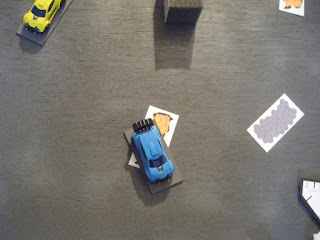 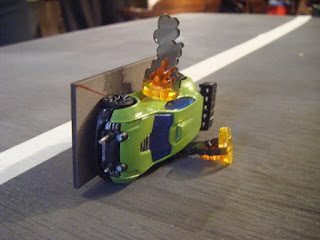 Back on the other side of the arena, Green did two successive very tight turns, lost control and rolled. 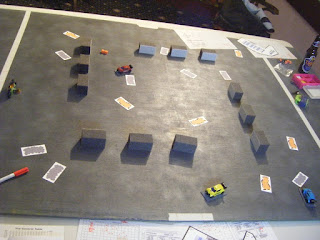 We decided to up the ante for the third game with each of us taking a Division 15 ramcar and a Division 20 shooter. We kept the extra obstacles.

During turn 2 I'd managed to position my red Smaksov for a T-bone ram on Simon's blue Zentrale. I hit him at 60mph and with the ramplate did enough damage to wipe out his right-side armour and do some internal damage. However, it did drop my speed down and the (failed) control roll resulted in a severe skid.

My red Zentrale had split it's shooting, firing the VMG at Simon's Smaksov and the recoilless rifle at his Zentrale.

Note- ramplates do double damage to your opponent and halve the damage you take. 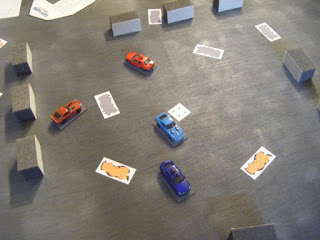 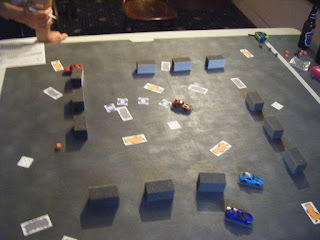 I decided to add to the obstacles by setting my Smaksov's minedropper to automatic. My Zentrale dropped a single patch of flaming oil and fired the RR at the blue Smaksov.

Note - if you set dropped weapons to automatic, they dispense one counter for every phase you move. 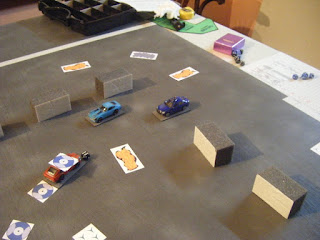 I'd left the minedropper on auto so that I'd be able to shoot at the blues on the next turn - I shot at the blue Smaksov ahead of the likely ram. The big question for me (and even more for Simon) was which way his Zentrale would turn. 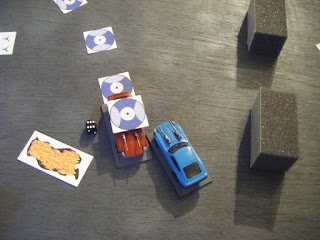 Luckily, Simon's blue Smaksov sideswiped me, mostly thanks to me turning slightly right. a head on collision would have been ugly and would have stopped me ramming his Zentrale. 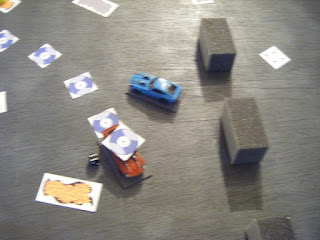 I remained in control, but Simon failed the control roll for the ram and his car suffered a severe skid. 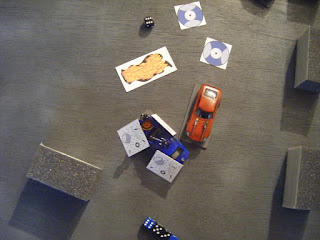 Oh dear, Simon turned his Zentrale left, exposing his damaged right side with me in the perfect position to T-bone him again. The result? 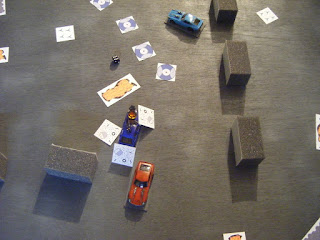 With me having two practically undamaged cars and Simon having just the one ramcar left, we called the game a win for me.


We had great fun playing these games. We need to get a few more in before inviting others to join in, so that we have the rules down. We'll also need to to make up some cheat-sheets with the distances done up to 3x scale. I think we'll also need to make up (or print out) some turning keys with the difficulty ratings for Classic rules.

I Think I'm Going To Need

...a multi-storey car park to accommodate all my Hotwheels-scale cars, especially with the adoptions I've made this week.

First of all, I found this one sobbing gently in Tesco during the week while I was doing a food shop. 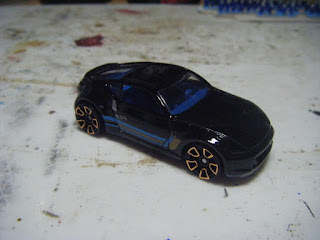 He'd been separated from his siblings and was miserable because he hadn't been able to find them. Little did he know that they'd been adopted by me. I took him home and reunited the three brothers. 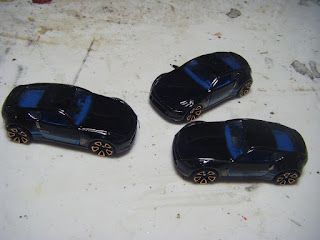 Sadly, it seems there was a fourth brother who is still missing. I'll keep looking to see if I can find him, but if any of you happen to locate  him, please let me know. He's a Hotwheels Nissan 370Z.


Yesterday, while searching for the missing brother I came across some more orphans in need of a good home: 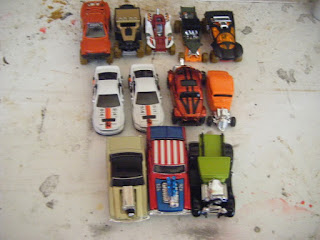 Mostly these will be for Wasteland gaming. The Beetle might become a hedgehog like the one on Fury Road.

Tomorrow night, Simon and I will be playing our first game (or games) of Car Wars. We've decided to go with Classic rules for now, but might upgrade once we've got back into the swing of things. I've packed my camera so there will be pics - promise!
Posted by TamsinP at 00:11 13 comments:

...when I was shopping yesterday. Poundland had a big bin of diecast cars, so I just had to have a rummage. My Home for Orphaned Cars is going to need a new wing built very soon. 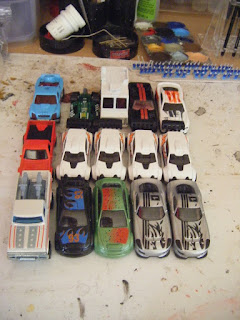 Yup, 15 cars were added to my collection. Including another four Fast 4WD cars - I might do these with a different weapon load-out when I mod them.

However, I think this was the real find of the lot: 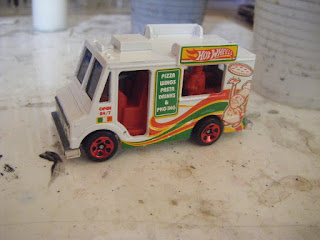 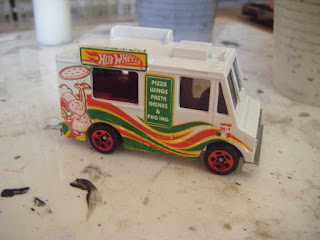 I must admit that I'm a little bit torn with this one - do I repaint it as scenery for the Arena pits or do I mod it for the Wastelands?
Posted by TamsinP at 23:13 19 comments: