The Podcast Strikes Back

OK, in London and Poole and now...

The less-than-magnificent seven have re-convened for another series of the Madaxeman Lockdown Podcasts, and the first one is available to download/listen to now. Have we got any better? I'll leave that for you to judge.

If you really, really want to listen to a long digression away from figure buying, figure painting and wargaming to discuss the benefits of Yorkshires*, then here is the link to the latest episode of chaos:

* Yorkshire puddings to the less enlightened.

Email ThisBlogThis!Share to TwitterShare to FacebookShare to Pinterest
Labels: Podcast 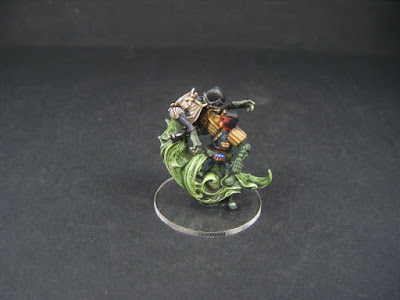 There has been rather a long gap since my last post - sorry about that. Mostly I have been reading, but I did finally knuckle down and paint up this vignette.

This model is/was the special edition miniature which was included with the Judge Dredd rules from Warlord Games. It is based on this artwork by Greg Staples: 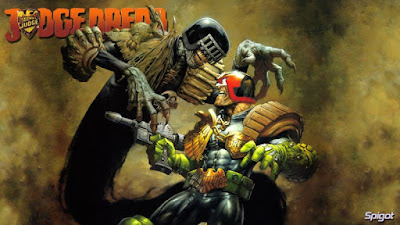 Which in turn appears to have been inspired by the cover art of 2000AD prog 1114 by Paolo Parente: 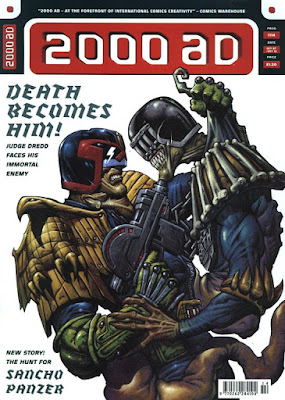 The story "Death Becomes Him" doesn't actually feature Judge Death, other than as a malignant influence on an actor who plays him.

That, surely, is enough of an introductory blurb. On with the pics! 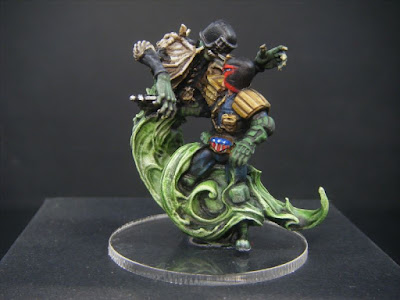 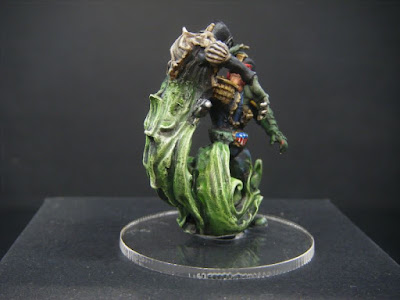 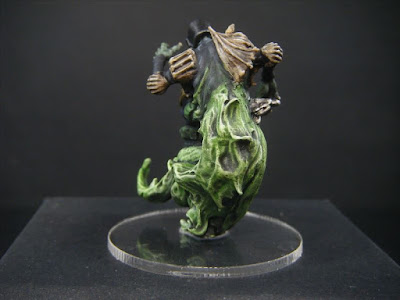 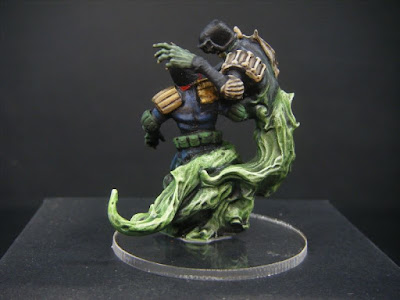 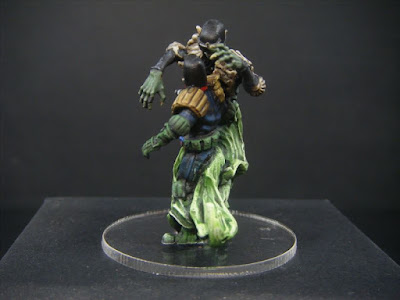 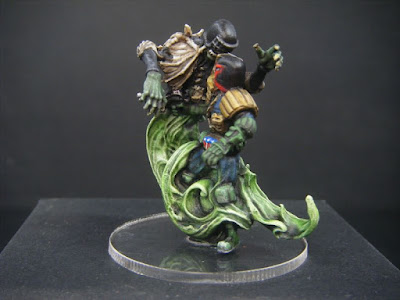 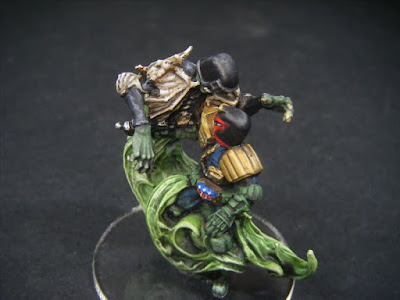 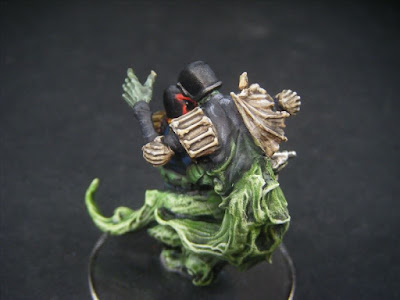 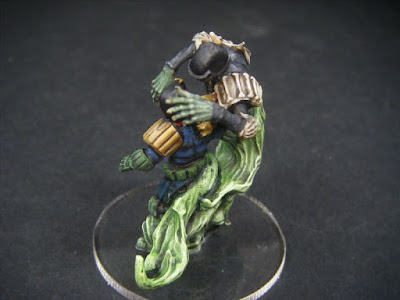 This will be the last figure I paint for a while as I don't want to start anything and then stop part of the way through to pack everything up for moving home (ps - still no news on completion date).

Tomorrow I will be spending time cleaning brushes and airbrushes. After that I will be having a bit of a sort-out of my painting room - I've definitely got quite a lot of stuff that can be thrown out.

News Crew and Minders for Judge Dredd plus (one day late!) 9th Blogiversary

It has been almost a whole month since I last posted. In my last post, I had just started work on this set of figures: 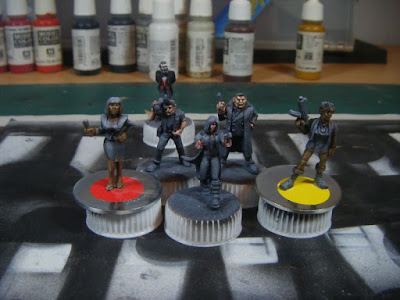 The next day I did do a little bit more work on them, but then hit a bit of a funk and only got back to them on Thursday. I finished painting them yesterday and did the varnishing today. 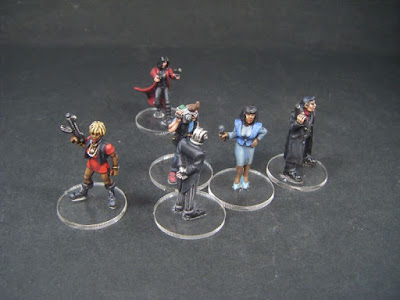 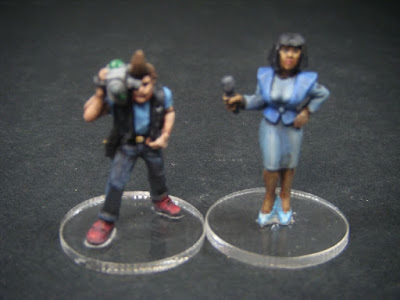 I had started out giving the reporter an Asian skin tone but it wasn't working out right, so I went back and did an African skin tone.
I'm not sure what happened with  the focus on a lot of these photos. They looked fine on my camera screen when I took them. 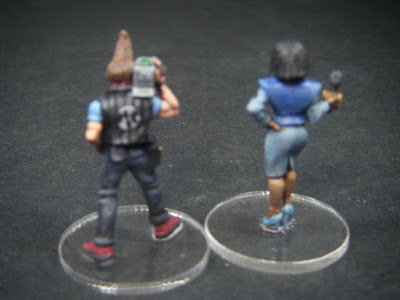 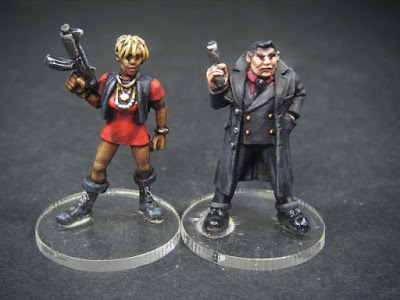 Alternatively, the girl could be a ganger; the guy could be a mob boss. 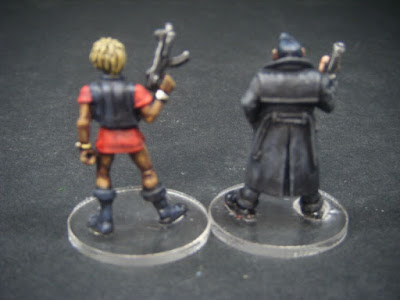 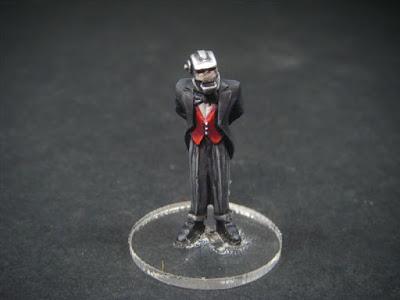 This robot could be the crime-lord Nero Narcos' "man" servant. 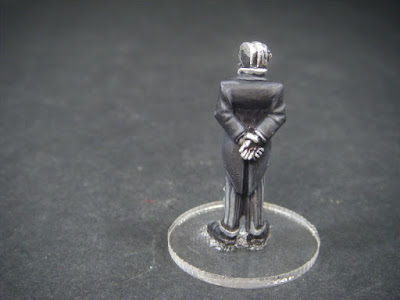 The NeoSov Agent (or mob assassin): 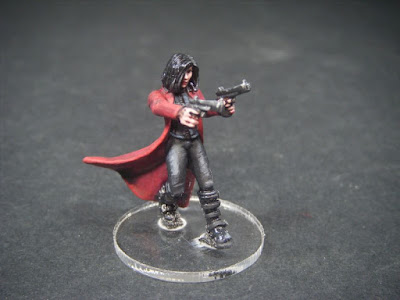 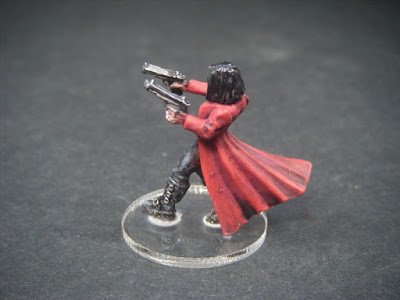 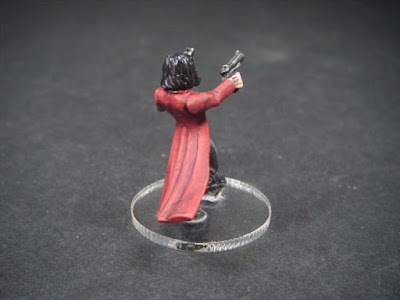 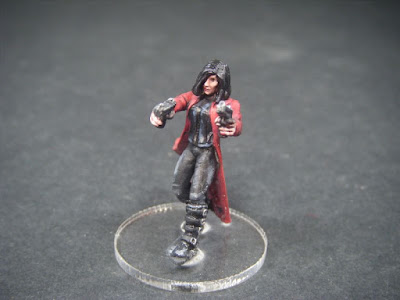 The figures are all from Copplestone Castings.

Yesterday was nine years from me beginning this blog. Last year I wrote a list of things that I planned for 2020 - let's see how I did...

1) Terrain - I need to get on with building my terrain collection. Mind you, that will have to wait until I have a little more space (I will be moving out of London this year). I'll be wanting terrain for New Guinea, Arnhem, Mega City One, Mexicagrave...

Despite not moving out of London yet (my house purchase is progressing - hopefully I'll be moving this month) I did do quite well on this. I made a bunch of rock formations for Strontium Dog, painted up a lot of terrain for Mega City One and a few hills and marshes for "Infamy, Infamy!".

2) No new armies, but I can add to existing forces (and paint/add to armies that have been bought but not painted)

I think I did rather well on this one (in comparison to previous years at any rate). The only new armies I bought were the Romans and Germans for "Infamy, infamy!". Mind you, i have since purchased some extra figures for both so that I can also use them for Art de la Guerre.

Oh, and I may have bought more figures for existing projects.

3) Have a bit of a clear out - there are some painted figures that I very much doubt will ever see the table and a huge pile which I doubt will ever be painted. Some may be donated to the club, others sold off at shows.

4) Finish off some of my incomplete projects - the Sarmatians, Buccaneers and Aztecs spring to mind)

I did manage to paint up a 28mm Wars of the Roses army for ADLG. Mind you, the less said about the older unfinished projects the better.

I did manage to get one game in. If Covid hadn't come along I might have got more games in.

6) Shows - Salute is a definite; other shows may depend on my move out of London.

Bloody Covid! No shows for 2020 and I doubt that there will be any in 2021. Maybe late in the year if the vaccines help bring down infection rates.

7) Painting - I do want to improve my painting skills this year by working on character figures and trying new techniques.

I did paint quite a few character figures during AHPC X and also for my Judge Dredd project and my skill levels have improved, but I didn't really get to try any new techniques.

1) Paint up the rest of the figures (and terrain) for my "Infamy, Infamy!" project (including the extra Romans and Germans to expand the forces for ADLG).

2) Make and paint the rest of my terrain for Mega City One. Also to paint the extra figures and vehicles for that project.

3) Make up a load of jungle terrain for my WW2 New Guinea project (which will also be usable for the Mexicagrave project if I ever get back around to that).

4) I probably need to add a few more bases of medium cavalry to my Mongol army.

5) Complete my 15mm SYW Russian army by painting up the Observation Corps. OK, and maybe some more Cossacks, artillery and commanders.

6) Make up and paint some more terrain for my Arnhem project.

7) If I've finished the terrain for (3) and (6), begin work on the Japanese and German opposition forces.

8) See about finishing some of those old projects...

Check back this time next year to see how I did!

As mentioned above, I should be moving out of London this month (unless there are any more delays in the process). Once that happens, I will be busy for a month or two getting the new place set up (and selling my current flat), so there might not be much painting going on.