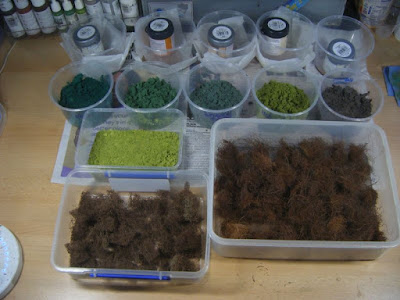 I've continued being busy with lots of little things today.

My clump foliage trials have been progressing. The batch I made yesterday is still drying. 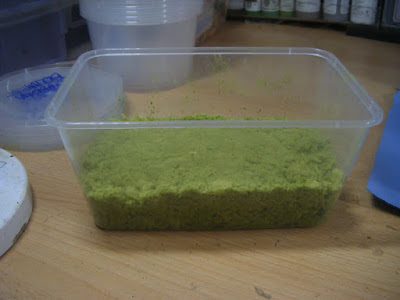 Early this afternoon I got the test batches done that I mentioned yesterday. I had decided to add an "Urban Jungle" test batch to the three colours I had originally planned. While I was mixing up the "Botanical Garden" batch I thought I'd try adding a little squirt of Burnt Umber craft paint to mute the colour a little. A tiny squirt had a massive effect, so I had to add some more of the green. As I still had plenty of shredded foam I also did a straight-up "Botanical Garden" batch. 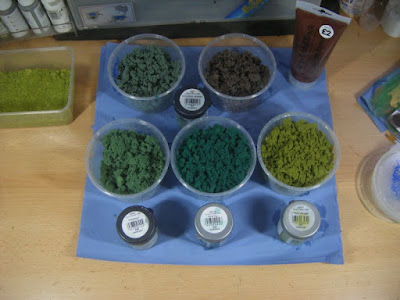 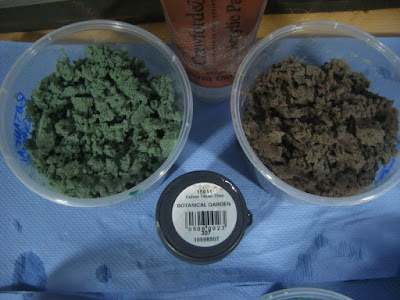 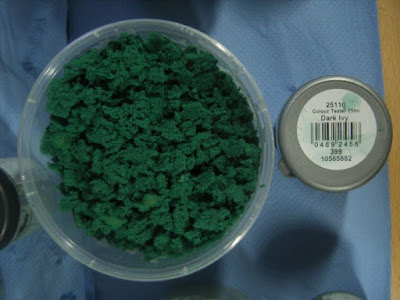 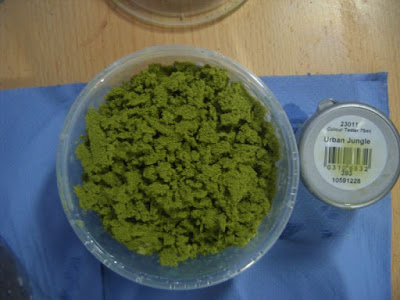 This evening, I decided to use up the rest of the shredded foam to do some batches with craft acrylic paints: 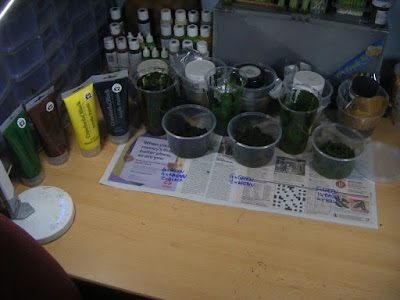 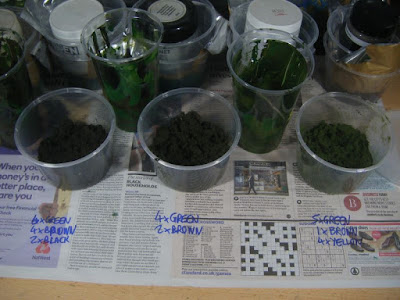 I've been chopping up some more foam this evening, ready to be shredded at some point.

If you are using kitchen or car sponges, soak them then wring out most of the water before cutting and ripping them up - the dampness kills the static so you don't get bits flying around and sticking to you.

As well as the coir basket liner bits, I also cut up some rubberised horsehair.I spray primed them all this afternoon. To make that job a little bit easier, I first coated some MDF sheets (the backing boards from cheap photo frames) with spraymount adhesive and stuck the pieces to them: 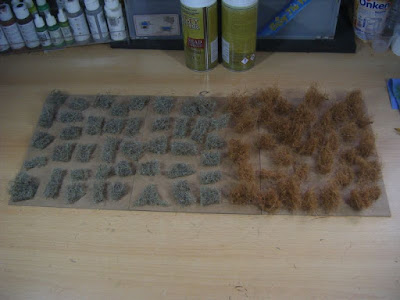 I didn't have quite enough space to do them all, so after the first batch had been sprayed I did the remaining coir bundles as a separate batch. This is how they looked after spraying: 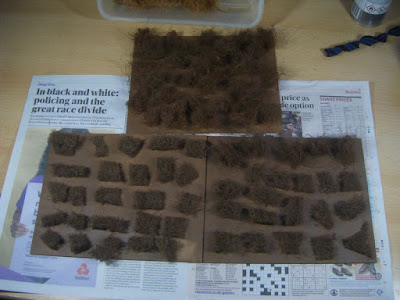 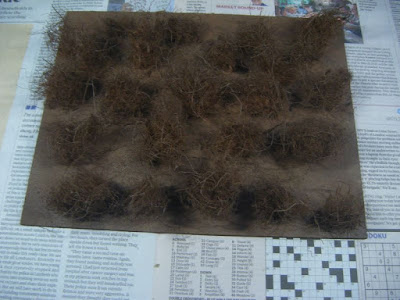 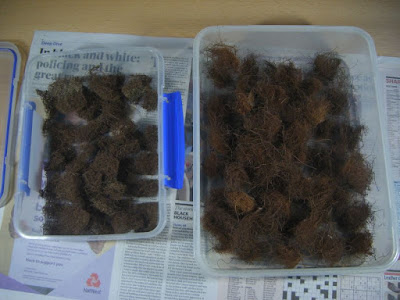 I think the coir bunches look more natural than the rubberised horsehair ones. I will probably need a lot more, but I've got plenty of the basket liner left (and I can easily get more of those from Poundland if needed). 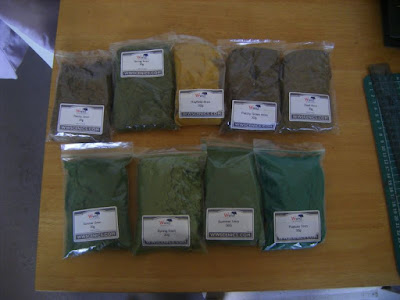 Just some static grass. Six of the packs were for ones I am nearly running out of. I also bought some 1mm packs for a particular reason, which you might find out about this week. They'll also be useful for any 6mm projects I might do in the future.

One type of terrain I will need to make up is plantations - banana, rubber and palm (coconut and oil). Using the guidelines from the Malaya campaign in one the Lardies' specials, each plantation needs to be 18" - 24" square (or equivalent); you can also have several areas of plantation. I decided to do a test layout to see what density of trees would look best and still be playable.

I began by gridding up some of the Terrain Tiles I received yesterday from Sarissa Precision. 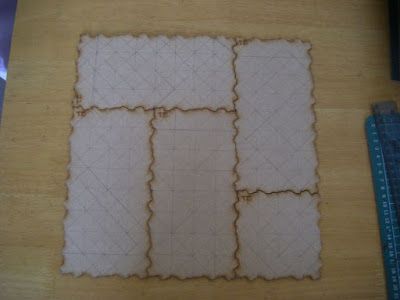 At this point, after about an hour of penciling in lines, I realised my big mistake - I'd have to drill a lot of holes to hold the trees and this was only for a layout trial! I quickly cut out and gridded up a 30cm square of 10mm blue foam. I then grabbed some figures and some trees and took some photos at various densities: 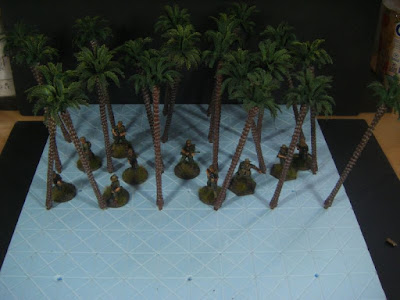 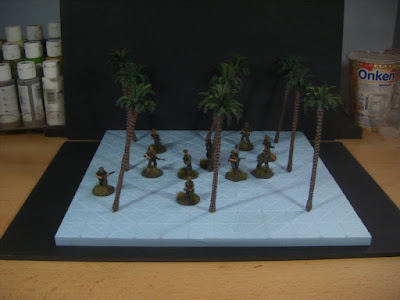 I think the density in the second photo looks best and it is still playable. That means for every 24" square I'll need 36 trees. Which in turn means a couple more Ebay purchases - I need quite a few more 11cm and 13cm coconut trees and some suitable deciduous trees to represent rubber trees.
Banana Plants: 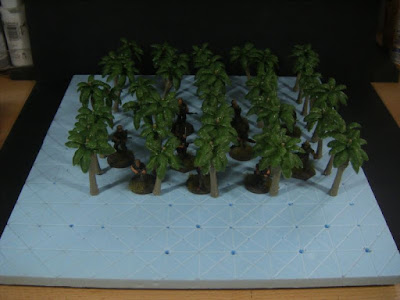 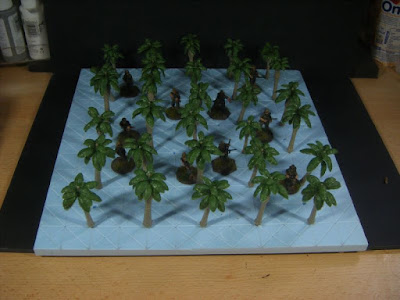 The density in both photos looks fine and is playable. I think I'll go with the lower density though as I should be able to eke out the plants I already have to cover and 18" square.
My plan is to make the trees removable so that storage is easier. I'll be using  MDF rings to hold the trees' bases.  I'm thinking that I could potentially reduce the number of trees by including some plantation buildings (sheds, workshops, etc) on the terrain tiles.
Tomorrow I will probably be heading to various local shops to restock on a few things.
Posted by TamsinP at 00:02