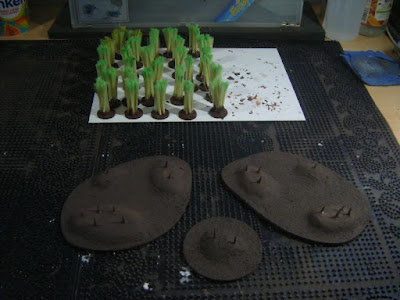 That's what is currently on the workbench. I've since done a little bit more work on them: 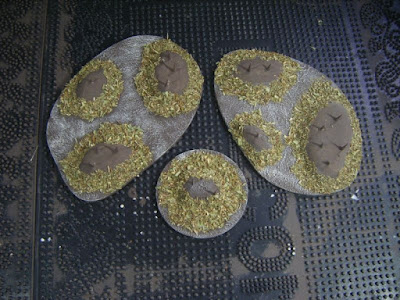 I realised after I'd started adding herbs to the bases that I'd forgotten to drybrush the texture gunk I'd added. The drybrush colour looks a bit stark right now, but should become muted as various washes and glazes are applied. 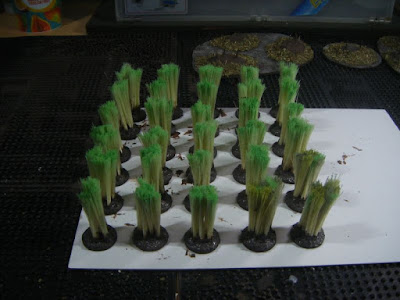 I've now added texture gunk to the kunai grass bases. Tomorrow I will be painting and drybrushing that, then adding some 10mm static grass. These kunai grass bases will be removable from larger bases.
Finished Bits 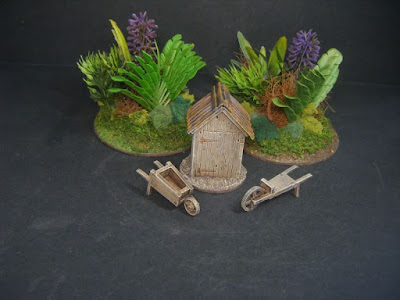 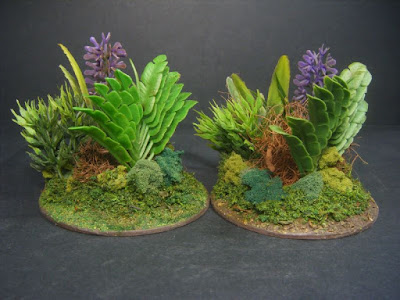 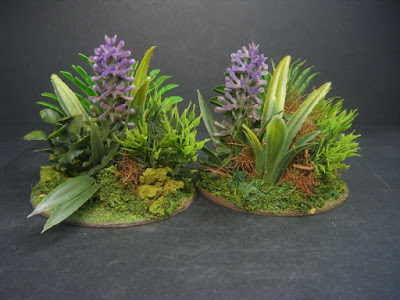 Having done a test of edging the bases with turf mix, I think that bases done that way would be fine for scatter in clearings, but it doesn't really work for secondary jungle pieces. I'll probably do a few more scatter bases like that, but for the most part will stick with the herbs for edging the bases.
Note To Self: wear gloves when adding the scrub & PVA mix to avoid this: 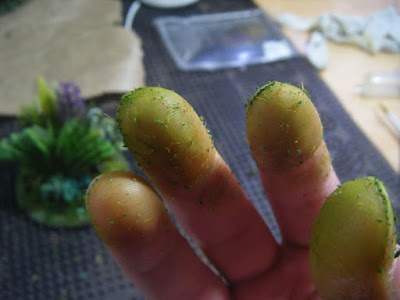 I keep forgetting that my scrub mix includes Javis scenics, which use dyes that leach when wet. 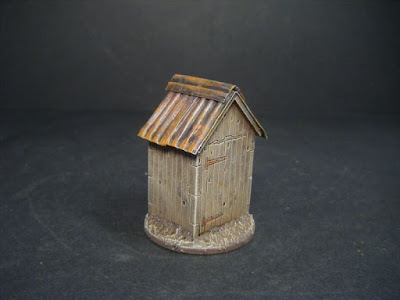 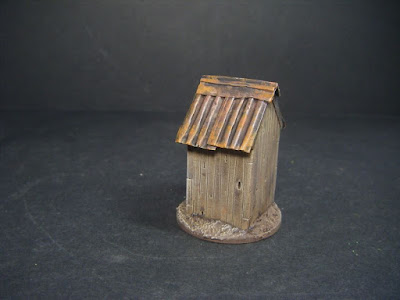 I think I will add some static grass around the dungy when I am doing some other pieces - it's not worth getting the kit out to do just this one item. 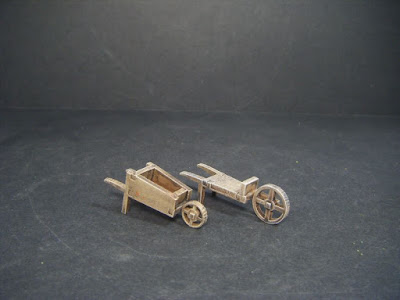 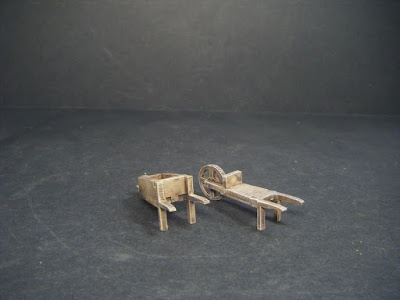 These barrows will eventually be added to the base of one of the plantation buildings.
The barrows and outhouse are from Warbases.
Foam Fun 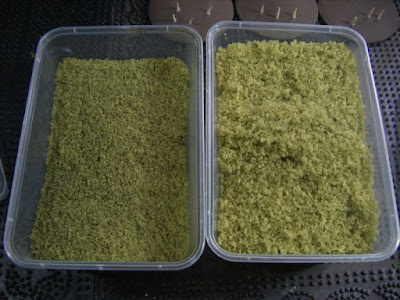 Do you recall the first test batch that I combined with the craft paint tests from the second batch? Well, it eventually dried fully, but it hadn't really clumped so I decided to blitz it down using a cheap coffee grinder. I then sieved the result to separate the finely ground foam from the coarser bits. Looking at the two tubs above, it seems that the coarser bits were from the middle of the foam pieces and hadn't absorbed much paint during the mixing. They're a decent crumb size now, so I might try using them for another test batch.
About a week ago I had chunked and blended the foam from another 3 car wash sponges. Having seen the results of the first few test batches, I took a look at the foam again and realised that I would need to blitz them down smaller. 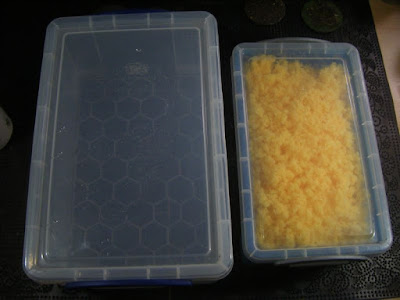 They went from filling a 9L RUB to a 7L RUB.
The test batches using kitchen scourer foam (and grey figure tray foam) finally dried out.
Tamsin's Tips: Don't try drying batches out in plastic containers - the top layer will foram a crust that seals in the rest which then can't dry. 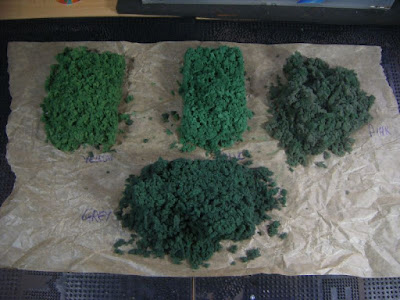 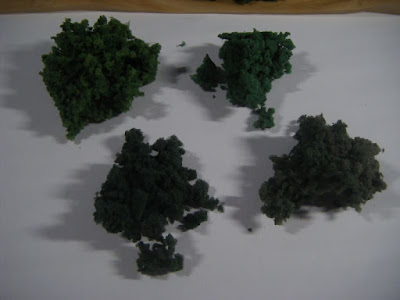 They have clumped quite well, the bits which were originally on top at least. I suspect that the longer the paint/glue mix takes to dry, the less it will clump.
Twenty Double (Not Face) Palms
I got these forty palm trees painted: 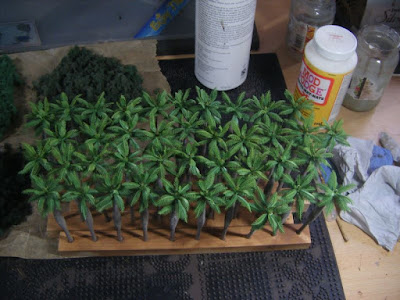 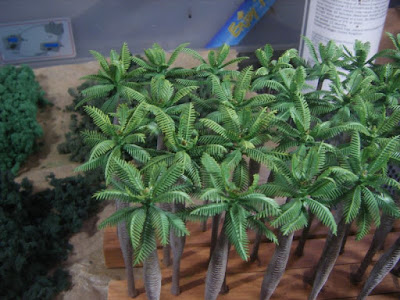 These palms will be used as filler for primary jungle and possibly for swamp bases.
"Yes, Sir, We Have No Bananas..."
Well, not yet perhaps, but we soon will have.  The first eight banana plant "trunks" are ready for priming: 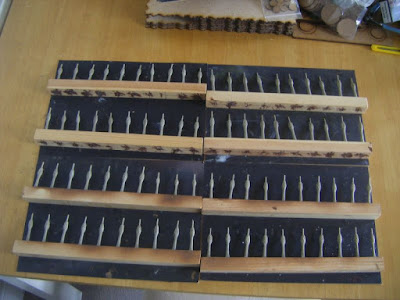 I'm still debating whether to bother with priming the leaves for these; I might try simply drybrushing them. If that doesn't work out, then priming them won't take too long.
Arrival of Goodies
First off, some (more) aquarium plants arrived that I'd ordered off Ebay and Amazon: 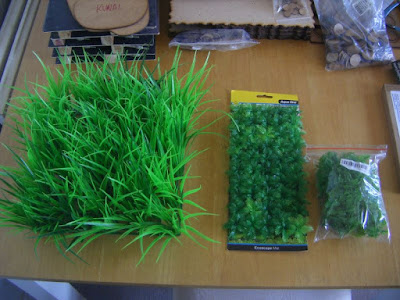 When I unpacked the mat on the left, I realised that I'd accidentally closed the wrong tab - I'd intended to order the dwarf version which are 4cm tall rather than 15cm! I've now ordered the correct ones. 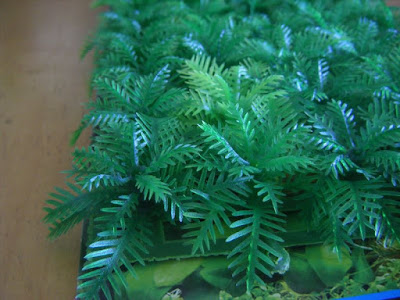 The middle batch were some nice dwarf ferns. I might order another mat of these.
Edit: As a couple of people have asked in the comments, here's the link to those ferns on Ebay: https://www.ebay.co.uk/itm/233962787972
Update - it seems that they are now sold out on Ebay - using this Google search term you should be able to find some aquarium suppliers with it in stock: Aqua One Ecoscape Mat fern
I also got a slightly heavy parcel from Timecast today: 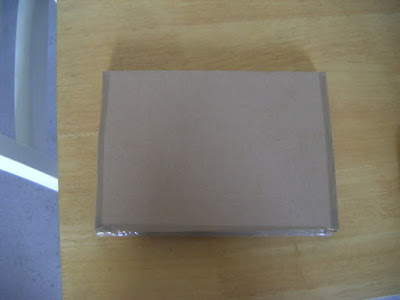 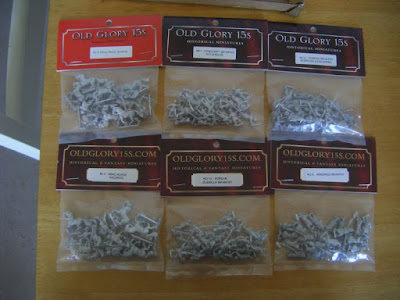 They are the reinforcements for my Choson Korean and Ming Chinese armies.