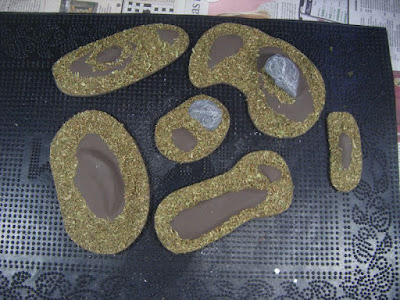 While my experiments with home-made clump foliage continue (more on that later in this post), I have started work on some test bases for the jungle terrain. The photo above shows them in their current state, so here are some photos of how they got there: 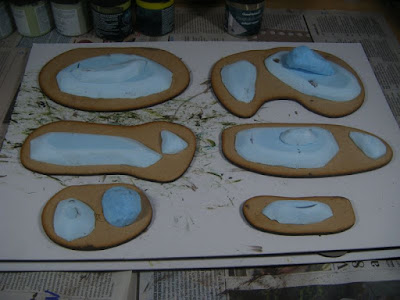 The first job was to glue some 10mm blue foam onto the bases to provide some contouring. With hindsight, 5mm foam would probably be better as the bevel can be shallower. I also glued on some of the blue foam "rocks" I had carved and textured a few weeks back. 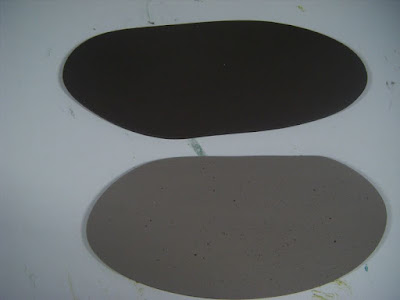 Before gluing the foam on I had painted the bottoms of the bases. After a quick test of two browns, I went with the darker one (Goodhomes "Bogota" from B&Q). 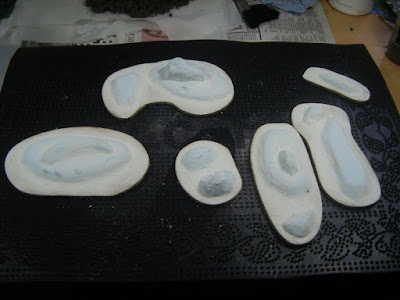 Once the glue was fully cured, I added some wall filler to smooth out the joins between foam and MDF (and foam and foam where I had added a second layer). The filler was then smoothed out with wet fingers, smearing it thinly over the whole surface. 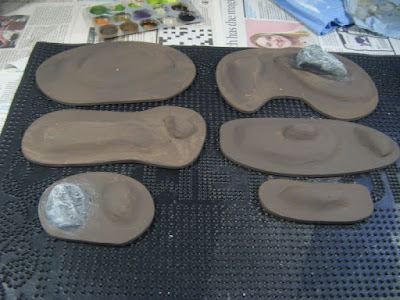 I left the filler to dry overnight, then applied a "Bogota" basecoat to all the ground. The rocks were basecoated, washed and drybrushed. This afternoon I added mixed herbs around the edges of the bases to represent leaf scatter. Tomorrow the herbs will get a sealing coat of PVA and brown paint and when that's dry I can start adding vegetation.
Foliage Fun 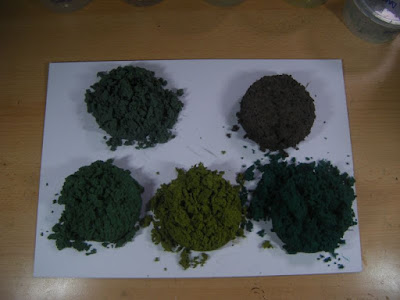 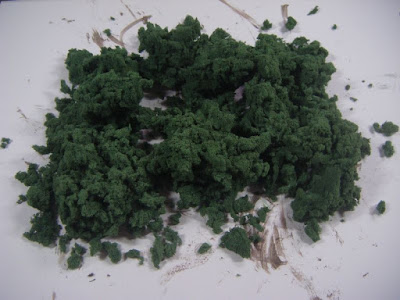 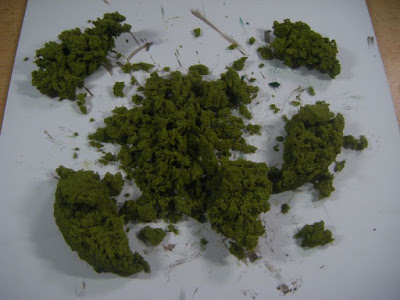 The second batches (done with tester pots of emulsion paint) had pretty much dried on Monday, and they seem to stick together quite nicely but there are bits which weren't clumping properly. I think that some PVA glue does need to be mixed in with the paint. The three portions done with craft paint hadn't dried much at all, so I decided to combine them into one larger container with a bit of PVA to see if that helped. The original batch was still very damp.
Yesterday I decided to combine the first batch with the craft paint batch and to add some PVA. They are drying out in a large tray: 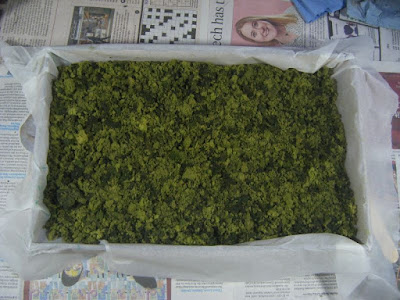 I also decided to bag up the five emulsion-paint batches into one bag: 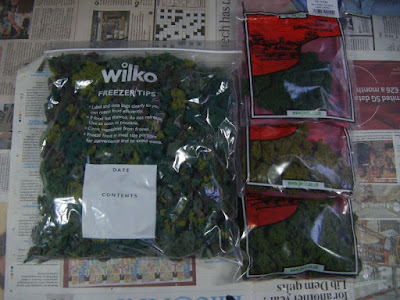 As you can see from the photo, my bag (total cost of materials about £2-3) contains nearly 10 times as much clump foliage as the three packs on the right (cost about £2 each). So, if you need a lot of clump foliage, it is definitely worth making your own.
For my next experiments, I will be testing whether the colour of the sponge used has any effect on the end colour of the foliage. To this end I decided to sacrifice a pack of kitchen scourers: 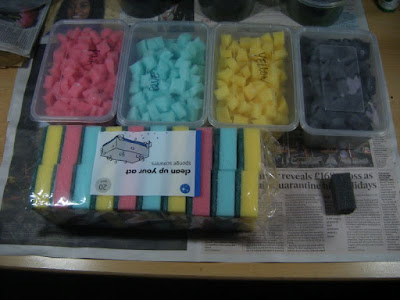 I also grabbed some of the grey foam inserts from some figure trays. After blending, this is what I had: 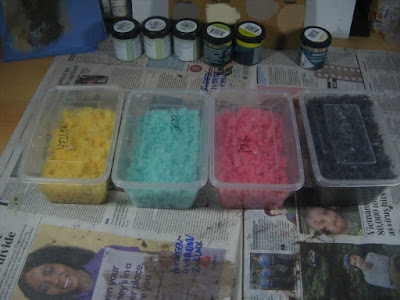 As you can see, the foam from the scourers dropped to about half the volume after blending, but the grey foam barely reduced. That was to be expected as it is a higher density. I'll be using the same colour of paint to colour each of these.
Plantation Preparation
Having decided on the tree density of the plantations, I decided to start adding MDF washers to the terrain tiles: 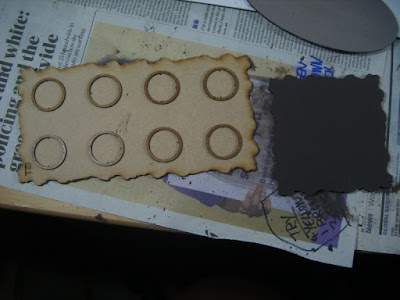 I didn't have enough to do all of the tiles (I've since ordered more). The bottoms of all the tiles have been painted. In case you are wondering about the MDF washers, they are so that the trees can be removed, helping to reduce the storage needed.
Posted by TamsinP at 23:07

Email ThisBlogThis!Share to TwitterShare to FacebookShare to Pinterest
Labels: Jungle, On the workbench, Terrain