Having realised that the foam-sandwich hills weren't salvageable, and that the gully didn't quite work out, I decided it was time to go back to that wargamers' favourite material - Styrofoam.

Steps Done So Far:
Cut out rectangles from sheets with heavy JCB knife - 3 from a 25mm sheet for hills, and 1 from a 10mm sheet for the gully.
Using a hot-wire cutter cut the rectangles into appropriate shapes (including central cut-out for the gully)
Sculpted the slopes of the hills and gully
Applied first basecoat of "Cocoa Bean" matt emulsion. 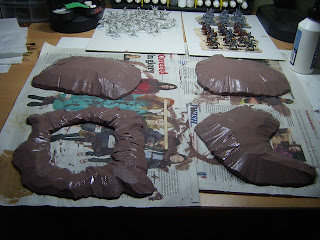 Last night while I was at the club playing a practice match, we received an email confirming the teams entered and the draws for the Saturday matches. A total of 10 teams had entered, 2 from Central London Wargames Club, so the organisers had placed the teams in 2 divisions - 6 in Division 1, 4 in Division 2. Somehow, both CLWC teams ended up in Division 2.

There was another twist from the organisers. As there are only 4 teams in Division 2, we will each have to fight 2 teams twice (once on Saturday, once on Sunday) to complete the 5 matches. They have therefore decided to allow us to submit a different army list (which can either be a different version of the same list or a completely different army within "period") on the Saturday evening for use in the Sunday games. Apparently this is a rather rare occurrence in tournaments, so it would be rude not to consider taking the opportunity. Gordon has said he will be taking lots of boxes of spare figures that our teams can use if they do wish to change their lists for the Sunday.

Or Sarmatians-posing-as-Alans if you insist.

So far I've only finished the basing and matt varnished the figures I was going to be taking to Campaign. As I now have the opportunity to change my army list for the last 2 games, I'm going to want to take some more figures with me - light horse, cavalry and light foot. And they will need to have their basing finished.

Oh well, in for a penny, in for a pound. I decided that I might as well finish the basing on all the Sarmatians I've completed painting of. Last night, when I got back from the club I dry-brushed the texture with Revell "Afrika Brown". I'll probably do the flocking tomorrow morning before I head off to work, then I can add tufts and clumps in the evening and do the matt varnish on Thursday.


"Why are you waving pitchforks and burning brands around?"

"You haven't done an AAR of your game of FoG last night!"

"But, I told you the outcome at the start of this post!"

"Maybe, but we want pics and details and cake!"

"Cake? You can have pics and details, but I'm not giving you cake - you might eat it after midnight and turn into Gremlins. Oh, just a second - I think someone must have already fed you after midnight already!"


*runs for the hills*

"OK you rabble - where are my bagels and muffins?"

My Early Alans were up against the Seljuk Turks that Howard is taking to Campaign. As much as anything, the game was to give Howard some practice with a cavalry army - he's more used to lots and lots of infantry. Howard won the initiative and luckily for both of us chose Steppes as the territory.

Losing the initiative and having first move is definitely helpful if you have an all (or mostly) cavalry army and your opponent does as well, as it allows you to restrict their room for manoeuvre.

Well, here are some pics: 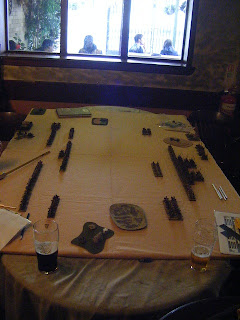 All troops deployed - Seljuks on the left, Alans on the right 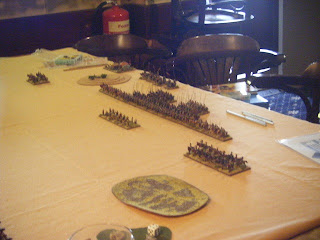 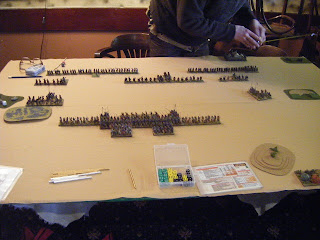 After my first moves. Now, is that ambush marker in the gully real? 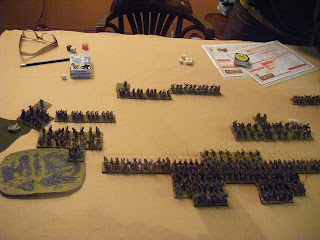 After Howard's first moves - view of my left 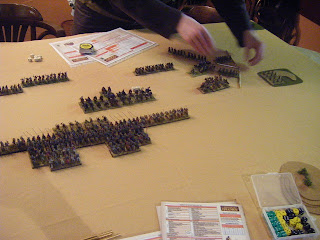 View to my right - yup, it was a real ambush, a 6-base LF group. I think the ambush was revealed 2 turns ago and managed to get one round of (ineffective) shooting in on my light horse, who then did a cheesy turn-and-wheel to take themselves out of range 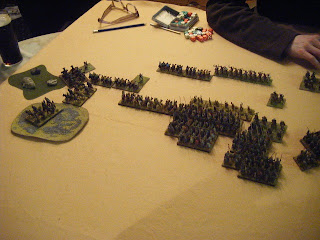 I forgot to take pics for a couple of turns. Some of my lancers are happily sitting behind their light foot screen, hoping to provoke the Seljuk "knights" to charge, whilst others on y left and centre are manoeuvring  to get into more useful positions. My left wing LH did a good job of protecting my left flank. 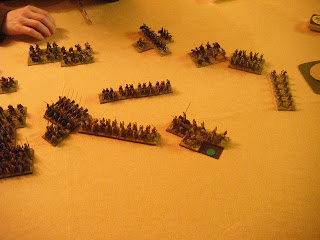 Meanwhile, on the right flank my combo of lancers, cavalry and LH are causing chaos. The green marker and lost base occurred a turn or 2 back as a result of ganged up bow cavalry and light horse (since chased off by may lancers and bow cavalry) 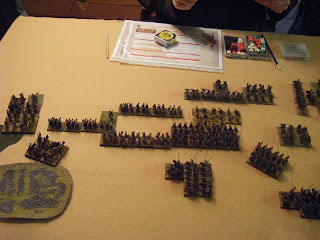 "Right, let's move a bit closer and see if we can provoke a charge by those "knights" now!"
"Yeah, can't let our light horse on the flanks be the only ones to charge!" 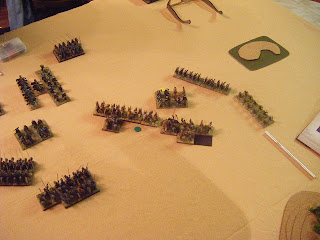 Remember those Seljuk bow cavalry from 2 pics back? Well, a couple of turns of shooting saw them drop to fragmented, then my lancers charged, they evaded but still got caught and were broken at impact and lost a base. This led to an immediate rout move and my lancers' pursuit caught them again, turning them to red mist! 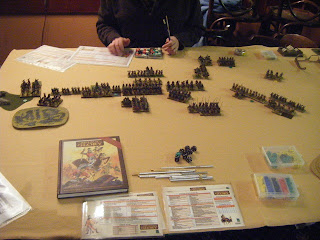 I made a big booboo here, trying to show Howard some options for his potential charges whilst forgetting my own otions. With my help, he charged my left-wing bow-cavalry with 2 units of his bow cavalry - at impact he managed to roll 6 hits (automatic base loss for me) against my 2, and I dropped to disrupted when I failed my cohesion test. After the melee they dropped to fragmented.

What I should have done:
Option 1: Evade with my bow cavalry - risky as they could have been caught in the rear by one of his BGs. However, my "rear support" lancers would have been in an excellent position to flank- or maybe rear-charge  in the next turn.
Option 2: declared an intercept charge by my left-most lancers. This would have blocked the second BG of Seljuks leaving the other impact/melee as an even fight which I could have reinforced with either my free LH or the "rear support" lancers.

At this point we'd reached the time limit. I'd broken one of his units, he'd fragmented one of mine. So, a minor victory for me. 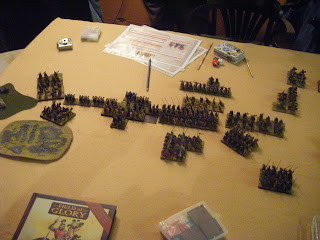 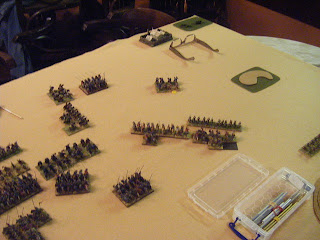 It was a good game and it was certainly odd for me to be teaching someone how to use their cavalry army, given my previous track record. It was also rather scary that I seem to have somehow acquired some tactical awareness from somewhere!