Today has been a right scorcher (by UK standards), so I didn't want to do any work on the road-sweeper until this evening when it had cooled down a bit. But I've made great progress - the vehicle has been fully assembled and I've started adding bodged scrap metal armour to it.

Of course, my workbench is a bit of a mess right now: 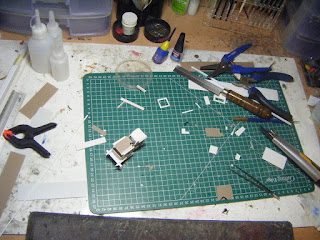 Some close-ups of the road-sweeper WIP: 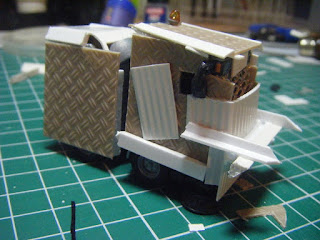 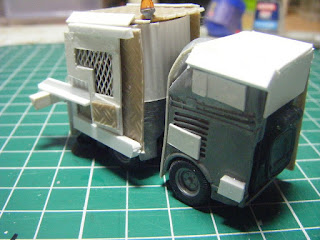 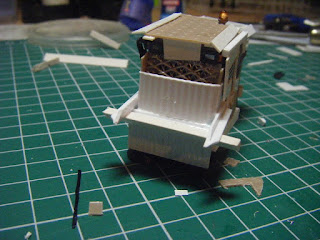 I'll carry on with the build tomorrow as it's rather late now.


My day wasn't entirely wasted by the heat though. I needed to go into central London to pick up some bits and bobs from 4D Model Shop and once that was done thought to myself "Whey not take a look in Hamleys to see what Hotwheels they have". A quick hop on the Tube and I was on Regent Street.

It was a good move - I came away with quite a haul: 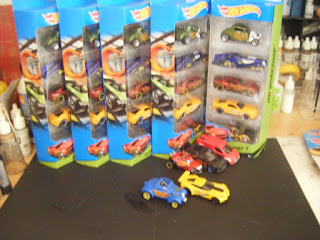 Five (five!!!) Flashfire 5-packs*, my eighth Rip Rod, another Lancer Evolution, a Transit, a Pass 'n Gasser and a Corvette CR.7. The last two are the only new ones and I found those in a pound shop on my way into central London. They take my count to 16 new car models, leaving 8 on my allowance.

*That might seem a lot, but gives me 8 each of 5 cars for doing custom paint jobs. Given how rare these seemed to be locally, I decided it made sense to snaffle them up while I had the chance (even though they were a bit more expensive than elsewhere). I can now stop searching for them.