Yes, it's time for the AAR of last night's game of Car Wars. We only managed to get one game in.

We also made the big mistake of using standard road/arena dueling designs rather than ones intended for racing arenas. Oh, and we forgot to agree certain ground rules such as no tire shots and no dropped weapons.

We each selected two Division 20 cars - I went for a pair of Smaksov IIs (the blue and the red); Simon went for a Zentrale and a Smaksov II (the two yellows). We then agreed to have starting speeds between 20 and 40 mph.

It was a rather crazy game and the arena was definitely much too big. For future racing arena events we need a smaller arena, cars designed for arena racing and racing specific rules (no dropped weapons, no tire shots, etc).

Oh, and I did buy some cars this morning: 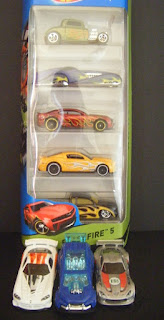 The only new one is the blue in the middle, the others are repeats. That takes my count (I've double checked the spelling!!) to 13 new cars so far; 11 still allowed.

The reason for the 5-pack is that there are some great cars in there for doing customs.

I didn't manage to do any painting today. I did try, but my right shoulder was a bit painful from sleeping awkwardly. Hopefully it will have eased off tomorrow so that I can get the 6mm figures finished, allowing me to start on the road-sweeper.
Posted by TamsinP at 00:56