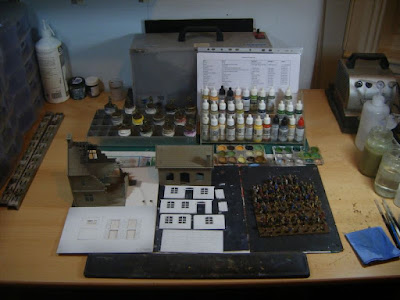 As you can see, there's quite a bit going on on my workbench at the moment. My Warbases order arrived yesterday afternoon, so I set about cutting magnetic sheet to size and sticking it onto the bases I need.

I'd finished the Germans during the day, including all the varnishing. With the bases sorted, I popped the figures off the sticks (and was pleasantly surprised when none of them broke at the ankles), sorted them out by pose and then into groups for basing, then finally glued them onto their bases.

This morning I added sand to the bases, then left them on top of a radiator to dry and harden. This evening I've applied a sealing coat of 10% matte medium and returned them to the top of the radiator. they should be ready for drybrushing and adding static grass tomorrow.

Rather than sit around idle while the basing was drying, I decided to start on the next squad of Japanese infantry: 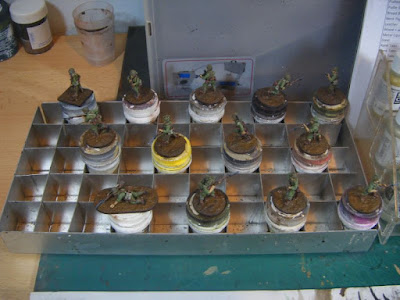 There isn't much left to do on them, but I don't think they will quite be finished in time to submit this week.

While the various washes were drying on them, I decided to assemble and prime a couple of MDF buildings which I had previously popped off their sprues. 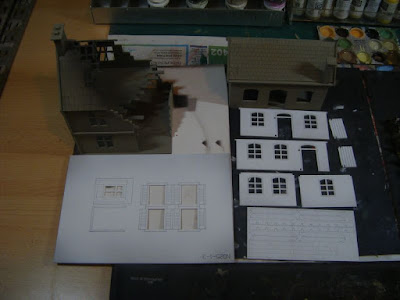 One of them will be part of a submission later in the Challenge, but getting them done to this point now will save me rushing later on.