Of Honorary Rejects and Celebrity Moggies

This morning saw me heading to st Pancras to catch a train down Gravesend where I'd be joining Postie's Rejects for a large game of Fire and Fury. At the station I bumped into Seb, so we traveled down together and I got to see some of the loot he'd picked up at Salute yesterday - mainly some lovely minis from Gripping Beast for Saga.

When Ray arrived to pick us up from the station, he got a ticking off from a PCSO - he'd done a U-turn to pull up in front of us and the PCSO was obviously relishing what was probably his only opportunity of the day to throw his weight around saying Ray had done the U-turn on a blind bend (it wasn't blind, maybe the PCSO was?) and over a pedestrian crossing (Ray didn't get anywhere near of the crossing). After that little adventure, we were safely delivered to Postie's house where Fran was doing the food prep for the pasta lunch we'd be having later on. Curt and Big Lee were already there, as was Postie's young neighbour Jack (who the Rejects have been rescuing from games by the Evil Empire of Nottingham, errmm, getting interested in historical wargaming).

After drawing lots to see who got which commands, we made our way to Postie's Den where the table was already set up, and the commands put out ready for us to deploy. This was how the commands were drawn:

* my having never played Fire and Fury and given their knowledge of my track record in Ancients gaming, this caused some considerable worries for Fran and Lee!

Postie outlined the scenario, special rules and victory conditions then Curt and I diced for initiative - he won, and decided to take first moves.

I'm not going to do a full AAR today (maybe later in the week), but to cut a long story short after much to-ing and fro-ing, when we called it a day with 4 full turns played victory went to the Confederates 19 points to 13.

I took a lot of pics (as did pretty much everybody) - I've uploaded them to my Flickr account. I hope they're all in the correct order in the set.

It was a great day and a hard fought battle with some amazingly good and equally amazingly atrocious die rolls all round. Not to forget the very lovely lunch cooked by Fran and the most excellent company.

Seb, Curt and I were all made "Honorary Members of Postie's Rejects" and presented with a miniature each, painted by Postie. 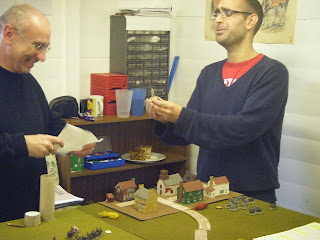 Seb grimaces at the thought of what that pike could do if he accidentally sits on it.... 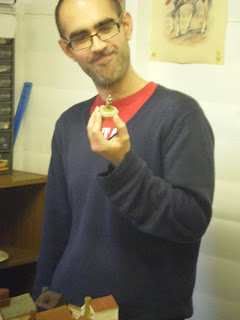 ....but puts on a brave face for this photo! 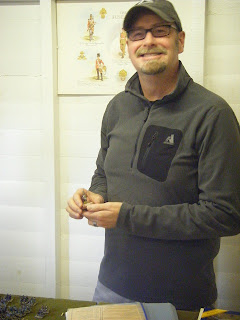 Curt grins - his mini doesn't have a nasty pike to accidentally sit on!

Pics from various angles of my mini: 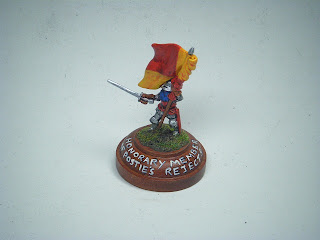 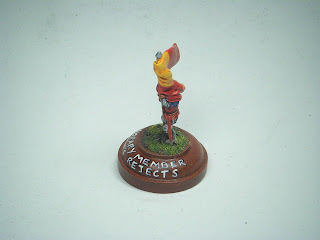 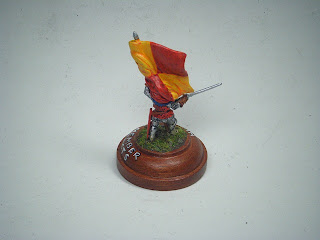 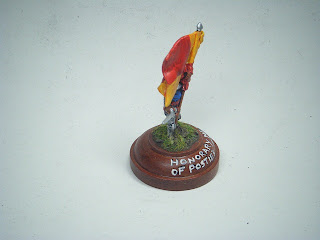 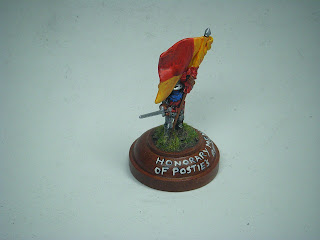 "Celebrity Moggies? What on earth are you talking about?"

To cut a long story short (or maybe not) when I got back to North London I was waiting for a bus when a girl in the queue starting laughing very loudly. I turned around and saw that a guy just along from me had a cat sitting across his shoulders. He explained that the cat is a celebrity - the eponymous Bob of this book:

The book is currently at number one in the UK best sellers list!