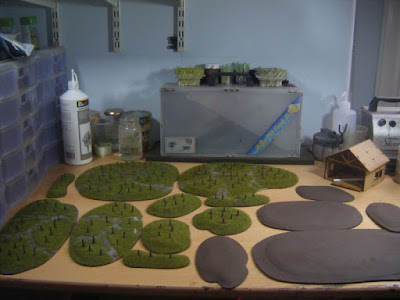 Progress on the kunai grass and bamboo thicket bases has been much better than anticipated. The filler had dried quicker than expected so I was able to paint the bases last night. Today I worked on the kunai bases, adding texture paste for the paths which was then painted and dry-brushed. I then added static grass: 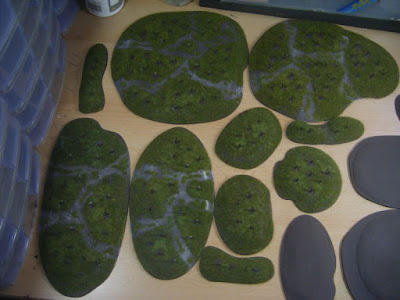 The dry-brushing was done using a rather old and scrappy 38mm (1.5") decorating brush; the paint was "English Sage" from Wilko. It's had a nice effect of toning down and matting the plants. I'll be gluing them onto the pegs this evening once the static grass glue has had a chance to fully cure. I'll only need about half of the plants on these mats, so will have plenty left to do more bases later on.
The bamboo bases have only been base-coated: 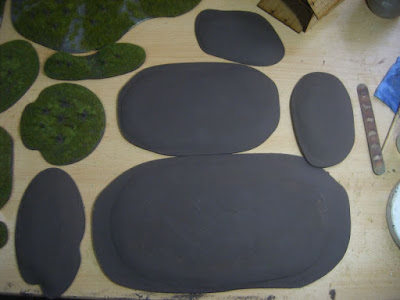 This evening I'll add texture paste for the paths, then paint and dry-brush them in the morning and adding static grass and some herbs in the afternoon. I'll also be dry-brushing the bamboo stems, but they'll have to be done individually so it could take a while to do all 250 of them.
Along with some more tree bases I ordered from Charlie Foxtrot Models, I had also ordered a Workshop/Garage kit. When I went to dry-fit it for assembly I discovered that I'd been sent a kit with two identical roof panels (they should be different as one is meant to overlap the other at the ridge). Colin sent out a replacement roof panel which arrived today. However, it was from a different kit so the some of the tab holes were in the wrong places. Rather than asking him to send another out, I just removed the tabs on the trusses where they didn't match up with the holes: 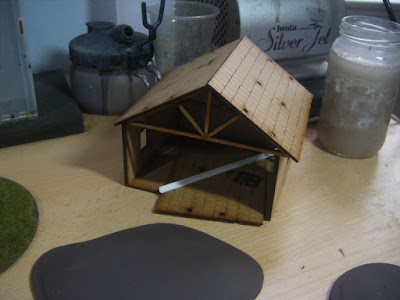 I'm going to be cladding the roof and walls to make this a storage/working shed for the plantations. The roof will be corrugated iron, but I haven't decided on the wall cladding yet. I might go corrugated iron or maybe bamboo and planks.