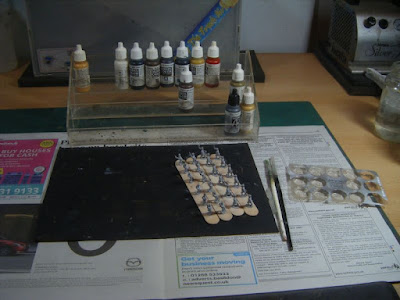 I'm back! In case you were worried about my not having posted anything for a whole two weeks, please rest assured that I am alive and well and that nothing untoward has happened to me. I was quite simply busy with all sorts of odd little bits and didn't have anything to post until today.

As you can tell from the photo above, I actually have some figures on the table ready for painting. Over the last few days I got all of this lost prepped: 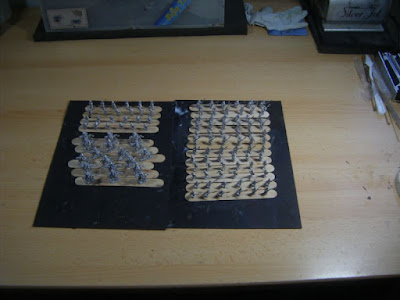 and primed them today with the airbrush: 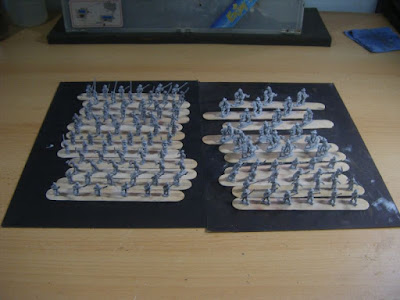 That's 96 foot and 18 cavalry for my Choson Korean and Ming Chinese armies. Some will be ADLG specific bases, the rest will be towards my megalomaniacal Korean army for FoG/FoGR.

Why did it take me until this week to start prepping them? Well, I was away for a few days at the beginning of last week, and then when I got back I managed to sidetrack myself to deal with a bug going round my in my brain.

For those who know the Traveller RPG system, I came across what I thought might be a clash between the world generation system and the stated average Imperial tech level. According to most sources I'd read, the average TL is 11-12 (Jump-2 to Jump-3). However, all the Sector data I'd seen suggested a much lower average TL. So....

...I thought it would be a good idea to do a quick check to confirm my suspicions. At least, I thought it would be quick. It wasn't. It took me a day and a half to build and run the spreadsheets to work it out. That's because there are six different factors that generate die roll modifiers for the tech level roll and many of them interact with each other. My suspicions were confirmed - the average TL using the systems in Book 3 and Book 6 comes out as around 8.

Clearly an additional DM on the TL roll is required to give an average tL of 11-12. Not knowing how big a DM would be needed, I did an initial recalculation using a +2 DM - that shifted the average TL to a bit over 9. I then tried +3 which shifted it to a bit more over 10. I finally tried a +4 DM which gave an solid 11.5 as the average. There was still a full range of TLs from 0-15, but the distribution was skewed much more toward the higher TLs. That makes much more sense given the published TL timelines - at the time the RPG is set, the Imperium has had Jump-3 for over a thousand years and Jump-4 for about 500 years. How likely is it that the majority of worlds would be TL 8 or below after all that time?

Oh, yes, each run of the additional DM took the best part of a day to complete as a lot of copying/cutting and pasting had to be done.

Which is why I wasn't doing actual hobby stuff to post here until this week.