Well, I had plenty of superior units who got stuck in to my opponent's forces. Unfortunately they were supported by my usual crappy generalship and decidedly inferior dice rolls. Yup, another loss, but I did learn some useful lessons. Oh, and the loss was bigger than normal as Andy broke enough of my units to cause a "rout", although I had broken one or two of his along the way.

The game could have been over much quicker if my dice rolls to rally one broken unit had followed the pattern of the rest of them - I managed to rally it up from broken to steady in 3 turns. However, having lost 2 bases (from 4) there wasn't really much that they could do.

The only unit that the dice seemed to like (for a while at any rate) was one of my veteran (=superior) foot units which did a marvelous job of smacking a hole through Andy's infantry centre. 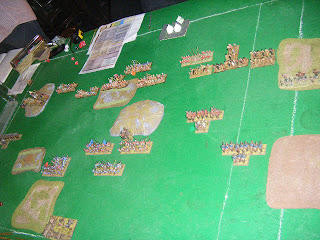 See what I mean about crappy generalship? Yup, I spread myself out much too thinly. 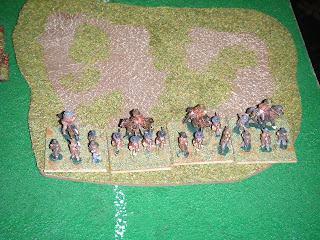 Yay! The dragoons I painted up for Andy as his prize (plus a few he'd painted up to match them). 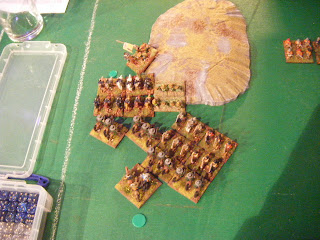 Bunfight on my left wing - 4 bases of Superior determined horse vs 8 bases of average horse (ie, equal dice at impact and in melee). Even though I've gone disrupted it should be a sure win for me here, shouldn't it? 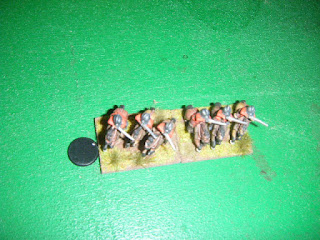 Not looking good for these determined horse from my right wing 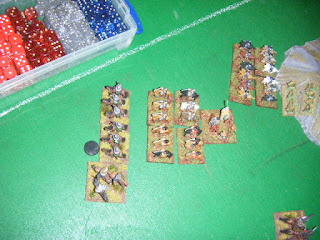 ...errrrmmm, that should have been a sure win for me, shouldn't it? 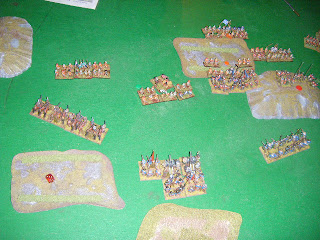 Meanwhile in my centre, one unit of veteran foot are trashing Andy's mere average foot. Unfortunately their neighbours aren't particularly liking being shot at having lost 2 bases and dropped to fragged. 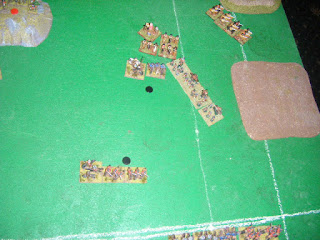 My other lot of determined horse on the right wing have now auto-broken from base losses. Well, that's what comes from fighting an equal opponent with your hands tied behind your back by crappy dice. The "red" determined horse are getting very close to the baseline - can they be recovered in time? 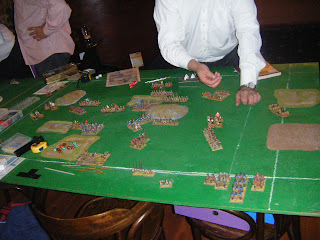 They could - this must be two turns later as they now have a green "disrupted" marker. In my centre, you can probably see one of my superior veteran foot units running down the hill away from the enemy.

Quick question - if it is your own army (possibly including younger versions of yourself) from 3 years before, can they be called the enemy? 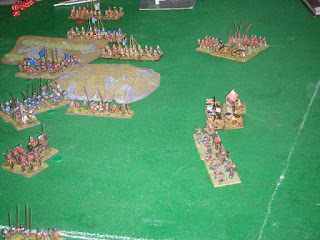 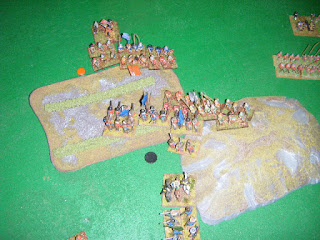 And the other unit of superior veteran foot breaks, the last one Andy needed to rout me.


Hopefully my NMA will do better tomorrow night against Gordon - their first game of our club's ECW tournament.

I spent last night and the start of this evening prepping the 24 "Croats". They're soaking in soapy water now and will be put out to dry in the morning. Tomorrow evening I'll stick the horses onto painting sticks then glue the riders onto the horses.

After I'd finished the prep I dry-brushed the metalwork of the cuirassiers, pikes, musketeers and artillery I had done basecoats on the other day.