OK folks, a report of my first game in the club's ECW FoG:R tournament. On Thursday my 1646 New Model army were matched up against Gordon's 1650 Scots Covenanters. I'd modified my list since Monday's practice game to increase the number of units I was fielding (albeit with a reduction in the overall quality).

Facing me Gordon had 2 bases of light artillery, four of heavy artillery (as 2 BGs), 2 BGs of lancers and 8 units of foot.

Having looked at the deployment and Gordon having done minimal movement told me that he was just going to sit back and play a defensive game. At first the battle was going pretty badly for me - one of the superior horse units and the average one got broken by shooting over on my left wing. However, things started to go a bit better for me after that and I had some brilliant results later on and the outcome was looking very close. In what turned out to be the final turn of the game there was a chance that we could have simultaneously routed each other. Unfortunately the dice were fickle for me and I didn't quite manage to break Gordon's army whilst one of my foot units failed it's cohesion test from shooting hits and dropped to fragmented which was enough to break me.

My deployment was somewhat better than on Monday but I really do need to work on how I bring my forces to bear as they were attacking in a somewhat piecemeal manner which allowed Gordon to get several of his battle groups shooting at isolated ones of mine.

Anyway, that's enough rhubarb from me, here are the pics: 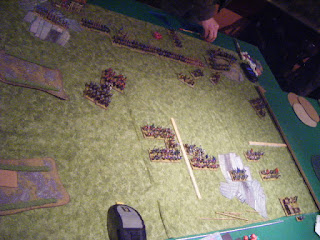 Positions at the end of Turn 2. the long wooden sticks are "linear obstacles" (walls, hedges) - not in the most useful positions. the blank MDF square in the bottom left field is an ambush marker for my dragoons. I probably should have brought them out at the start of the battle so that I could actually get them doing something useful. 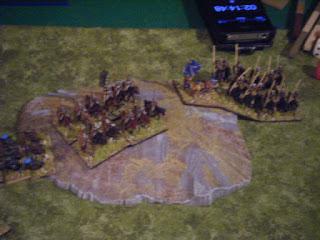 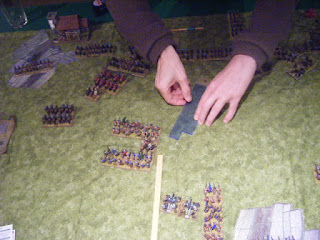 Gordon measures the range and arc from his light artillery to my superior foot. Just out! 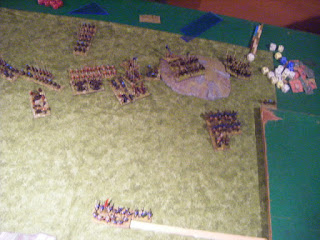 My right wing determined horse advance towards his lancers. At the bottom of the picture you can see one of my average foot units has lost a base from the heavy artillery. 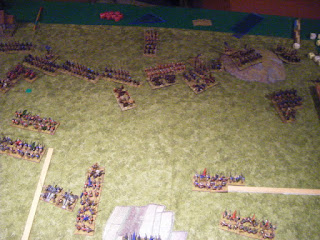 A wider view - a unit of foot has gone into column to move past the artillery - they could have moved through the guns, but by doing so would have blocked them from shooting for a couple of turns. 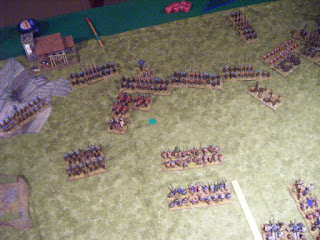 The red superior determined horse aren't liking being shot at - 1 base down and disrupted. 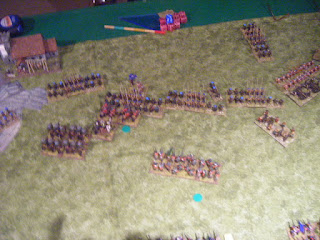 My superior foot are finally in arc and range of Gordon's light artillery. They didn't like being shot at either. My red horse have charged in and succeeded in losing another base - I was having crappy dice for death rolls at this point in the game. 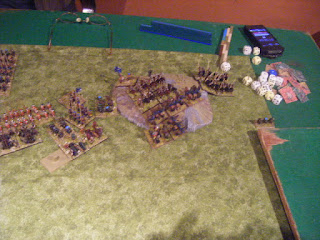 The blue horse charge uphill into the lancers. The impact and first melee were both draws. 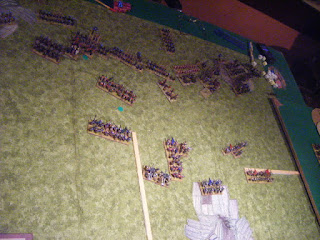 The column failed it's CMT to expand and so just moved forward. My poor foot have taken up residence behind the linear obstacle. 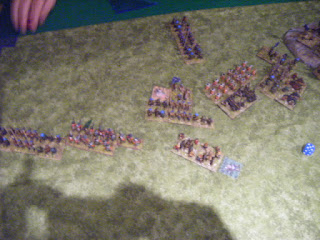 I forgot to take photos for a couple of turns. By this time my red horse had broken, as had the green "average" determined horse, leaving my superior foot slightly isolated. They'd lost a base to shooting, but I decided the best thing to do was to charge them in. As you can see, they did a pretty good job of tearing a hole in Gordon's centre and of disturbing his surrounding units. I think this pic was taken before the pursuit - the unit ahead of them is fragmented and failed its test to stand, so broke and ran. This then dropped the light guns to fragmented. 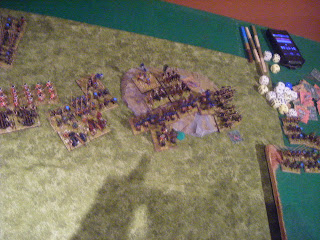 Back to the cavalry fight on my left wing. In the previous melee phase I'd disrupted the lancers in front. Gordon's 2nd lot did a flank charge (which disrupted me) but lost at impact. Then in the melee phase I won both fights, dropping the lancers ahead to fragmented and the flank-charging lancers to disrupted. Looking good! 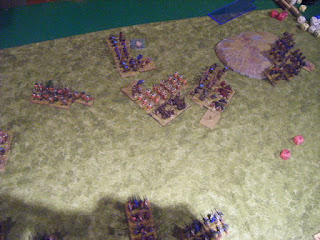 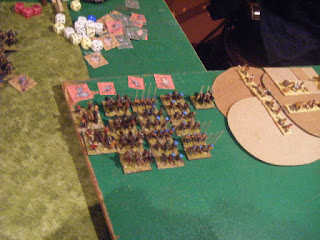 Gordon's death pile at this point - 4 BGs down 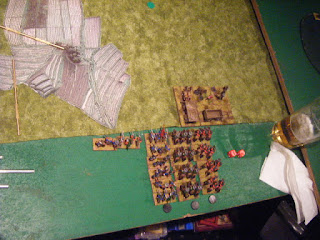 My death pile at this point - 3 BGs down 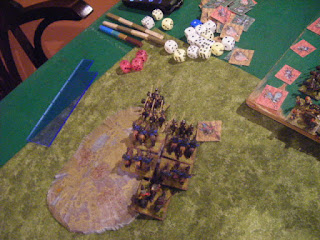 So, these average lancers, fighting uphill against superior determined horse have lost a base, are fragmented and I can still expand into overlap onto both flanks? I think this looks pretty good. 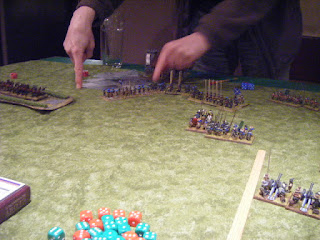 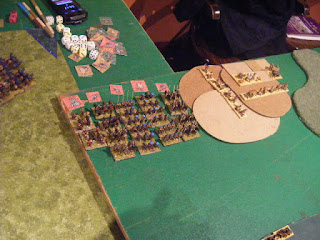 Back to Gordon's death pile - 5 BGs broken. I just need to break 1 more and fragment another 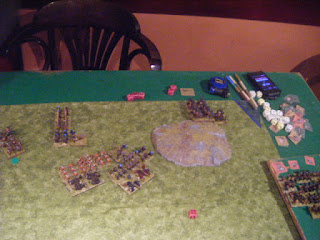 The blue horse try to come around Gordon's rear for a target-rich environment. Unfortunately my superior foot have lost another base to shooting and been disrupted again. 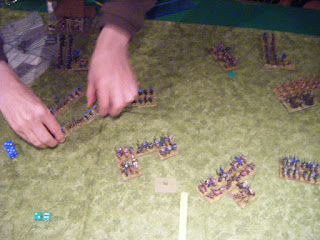 Remember the foot in column that failed its CMT to expand? It did that a couple more times before I realised that I could simply turn 90 and then advance (with a general attached for the 2nd move). If I'd thought about it earlier they could have been more use. Here you see them advancing to my left wing to provide support to the average foot who were originally supporting the superior foot but have become somewhat left behind and isolated. 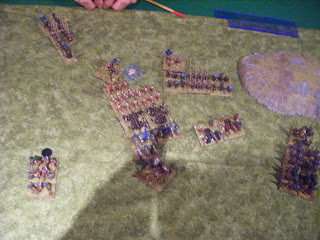 the blue horse couldn't quite get into charge range at the rear, so have come back over the hill to taunt the heavy artillery. One more turn and they should be able to capture one of them which might be enough for a win. 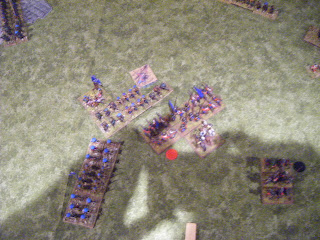 Unfortunately my superior foot got broken by shooting and the threat of a charge and can be seen routing towards my baseline in the bottom right. The column unit didn't quite make it in time to support the other foot unit on my left which broke in the previous turn.
Here you see the shooting phase of what became the final turn. My foot and Gordon's foot have simultaneously fragmented each other. This was the last point Gordon needed to take to rout me - I need to take 2 more to rout him. 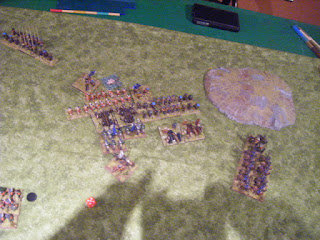 So I'd done something either brave or foolish - charged his guns with my firelocks. As they were protected by his foot we ad to fight for them - both the impact and melee ended up as draws. Damn! If the foot on my left hadn't fragmented I might have been able to rout Gordon in the melee phase. 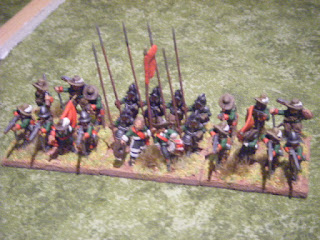 My unit of the match. They've only received a brief mention up until now, but these are the Poor foot. Why are they the unit of the match? Well, Gordon's heavy guns seemed to focus all their fire on them in the last few turns, every time forcing a death roll (and a number of cohesion tests). They passed every one.

What I probably should have done:
Massed my foot on my left flank and advanced so that several battle groups would simultaneously engage his outermost units whilst receiving rear support from other units.
Brought my dragoons out straight away to support the infantry attack
Massed my cavalry on the right wing and advanced rapidly to take the lancers and get into his rear.
Brought forward my firelocks earlier in support of the cavalry attack.

It was a useful game and at least I now have a better idea of how to handle the army. Hopefully I'll remember these lessons for my next 2 games.

Painting etc update:
I haven't done any painting since Wednesday - I'll start work on the artillery first.
The Croats' horses have been glued into painting sticks - I'll glue the riders on tomorrow and might also be able to get them primed.
The camp/ambush markers are still waiting for their matt spray - I hope to do that tomorrow morning (I was just too cold this morning to want to open the windows up). then I'll be able to do the tufting and flocking to finish them.
I've started assembling the two 4Ground dark ages buildings I bought at SELWG this evening. I just need to add the detailing (windows, doors etc) and coat the fake-fur thatch with 50% PVA and they'll be good to go.
Posted by TamsinP at 22:25