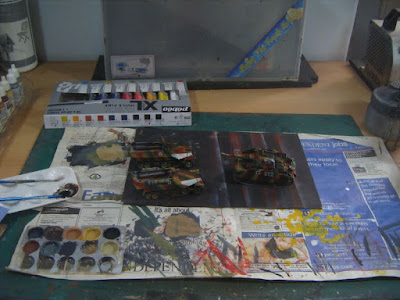 As you can see, I'm still working on the vehicles for my Waffen SS force. I added the decals this week (I had to remove the stowage from one half track as it was in the way, then re-attach them once the decals had set), painted (most of) the non-airbrush details, then today I glossed them and did panel lining with thinned oil paint. Tomorrow I will hit them with a coat of matt varnish to seal in the oils.

Progress has been slow, mostly because I've been busy reading a very big book - a volume of the official history of the Australian army in WW2. However, I do plan to kick myself into a higher gear over the next few days and should get them finished before Wednesday. I also plan to get the reinforcements prepped and primed before next weekend. 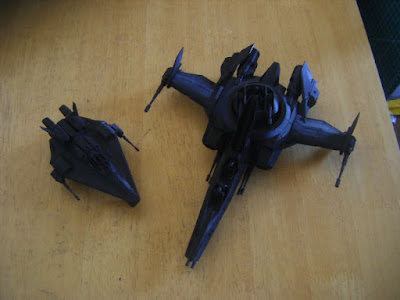 I had to reprint multiple parts due to print failures. The failures were a result of one thing for sure and another that I suspect. The suspicion one is that the stringing I was seeing was the result of the slightly higher humidity we had mid-week. That wouldn't have been enough on it's own, but would have exacerbated the real culprit which I discovered when I swapped filament spools and did some general cleaning and maintenance.

It seems that a couple of the tightening wheels had loosened since I last checked them - the one on the right hand side of the X-axis gantry arm was free spinning and the one for the print head had loosened enough for the head to wobble.

The first wouldn't have been a problem on a dual Z-axis printer, but mine is a single Z-axis so a loose wheel on the other side can cause the X-axis gantry to sag down to the right as the print head moves across, resulting in the nozzle catching against prints and pulling them off the print bed. The second can also cause catching, but is usually less of a problem.

I got both of those tightened and checked all the other wheels - they were all fine.

After loading new filament, running the auto-leveling and printing my standard test pieces for new filament I started work on my next printing project: 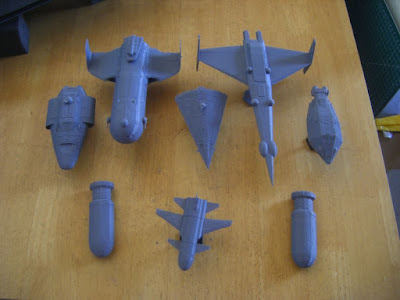 These are the 1:270 scale models of Traveller ships which I bought through a Kickstarter. Well, the first few anyway (and the two identical ones are actually parts of a larger model). I've got a lot more to print, and then I have some non-Traveller ships as well in the same scale.