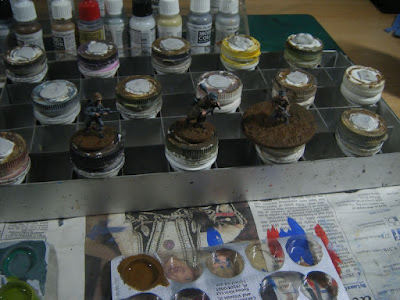 No, your eyes aren't deceiving you - those are indeed part-painted figures! I decided this afternoon to make a start on some test figures for my late war Germans. As they will primarily be opposition for my British Airborne I reluctantly opted to do them as Waffen SS (*spit*).

Having made that decision, the next one was obviously which SS camouflage pattern to go for. After some humming and haaing, I opted for oak leaf pattern. I'll do the main platoon in the autumn version (with orange dots) and the supports in spring (green dots). Well, apart from the sniper that I'm using as a test model which has been done in autumn.

Before starting the test paints, I did try out a few mixes to get a uniform colour that I'm happy with: 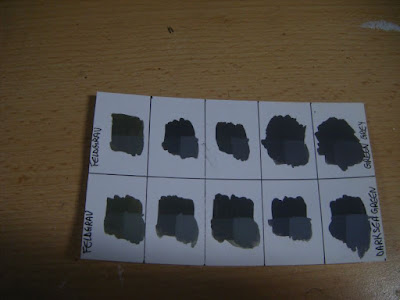 The top row is Feldgau working to Grey Green, the bottom is Feldgrau working towards Dark Sea Green (1:0; 3:1; 1:!; 1:3; 0:1). At the bottom of each swatch are the first and second highlights, made by adding Light Grey and then Sky Grey.

I was thinking (and somewhat dreading) that I'd have to freehand the various insignia. Then I remembered that I have a decal sheet, although I might need to get another to ensure that I have enough to go around all the support options. I'll still need to freehand the shoulder boards on some figures though...