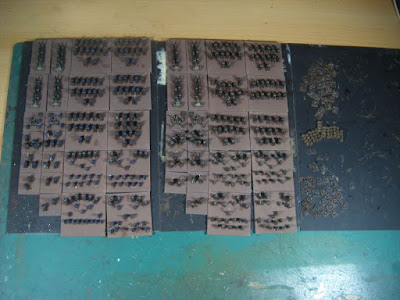 It would appear that I have manged to get further along with things than I'd expected . I got the varnishing done today and have also got all the figures off the painting sticks and glued onto the bases. That means I will be able to start on the basing mix tomorrow, rather than on Friday.

Having painted all the casualties and gabions, I realised that I don't have room for them on the cavalry and artillery bases. I could, perhaps squeeze some casualties onto the mounted cavalry bases, but I suspect most will end up on the bases of future infantry additions (at some point I need to add some more to both armies).

Email ThisBlogThis!Share to TwitterShare to FacebookShare to Pinterest
Labels: 6mm, ACW, On the workbench