Entries to this year's Analogue Hobbies Painting Challenge are now closed and I believe that 85 individuals will be sectioned alongside Curt in the madhouse for 3 months. We still have 2 weeks to put our affairs in order and say goodbye to our loved ones before the men in white coats (or black/blood red/purple hooded robes) drag us off to the asylum.

For me, those 2 weeks will mostly involve getting my painting station in order following my ceiling collapse. The past few weeks have seen me slowly filling boxes with books, files, CDs, DVDs and such-like from my living room until I ran out of space for storing them until I had enough to make it worthwhile hiring a man-with-a-van to shift them to a self-storage locker. I got that done this morning and then set about moving my painting desk and the bookcase I use for storing painting & modelling materials into my now-almost-empty spare room, along with my TV stand. Due to a lack of space, I will be sharing my painting space with my computer space. 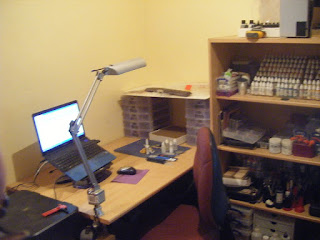 My task for the next few evenings will be to get everything sorted, whilst also packing up some more stuff from my living room. I also need to order a few bits and bobs for use during the Challenge.


So, what are my plans? Well, first of all I have a couple of character figures to paint over the first couple of days before I head out of London for Christmas. Once they are done, I'll be working on my 6mm Confederates. Mostly because they are already primed, unlike the rest of the figures I'm planning to paint.

OK, so what are the other figures then?

All sorts. A lot of my lead/plastic/resin has gone into the storage locker, and there's some more still to take. That still leaves me plenty to knock out during the Challenge, especially as my target this year is just 1000 points.

Hey - I'm allowed to take it easy once in a while!

So, the other things (in no particular order)

I've actually got more figures available than I need for 1000 points, so some of the above might not get painted. We'll just have to wait and see. If things are going well, I might raise my target, but I don't plan to go to the same crazy levels as I did the last couple of years.
Posted by TamsinP at 22:45