I actually did some painting last night!

OK, you can stop pretending to have fainted. You're not that good at acting.

Yes, that's right. I started in on the 6mm Union infantry. I only got the jackets and trousers done, but it was a good start.

This morning, while I was out shopping, I did have a rummage through the Hotwheels bins in a couple of shops and adopted a few more; mostly repeats but there was one which I thought was a repeat but turns out not to have been - the Chevy Silverado. 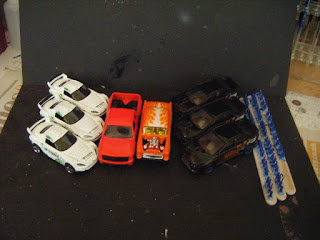 This evening I've done a bit more work on the Union infantry, and this is the state they're in at the moment: 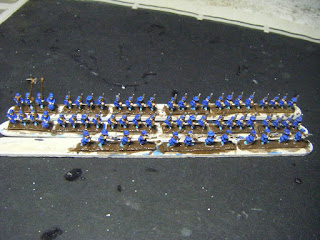 The next step is the black, which will take ages, so I'll leave that until tomorrow. I *should* be able to get them pretty close to finished tomorrow if all goes well.


I did get a game in at the club on Thursday night, but forgot my camera so there aren't any pics to show. It was an ACW ironclads scenario based on the second half of the Battle of Mobile Bay. Rather than the CSS Tennessee facing down 14 Union ships, it was only facing seven. With 3 of us on the Union side, we probably caused more problems for each other than for the Rebel captain. One of the union guys even managed to almost ram his flagship with one of his smaller vessels. We did manage t prevent the Tennessee breaking out, scoring several funnel hits, several superstructure hits (which had the bonus of taking out guns) and finally holing it below the waterline. With no guns left (a misfire had taken out her stern battery early on in the game), next to no speed and my two heavily armed monitors closing in fast the Rebel captain wisely decided to strike his colours to save the vessel and crew.

I've got two games of ADLG lined up for next week. On Monday my Sarmatians will be getting another outing and on Thursday my Alpine psychopaths will be taking on some WotR boys.

Email ThisBlogThis!Share to TwitterShare to FacebookShare to Pinterest
Labels: 6mm, ACW, On the workbench, shinies, Witterings