Well, I did get back last night but I was too tired to post so I've waited until today.

On Friday evening 5 of us from the club met up for a veggie curry (which was very nice) before heading to St Pancras for our train. At the other end, after a cab ride to our B&B in Melbourne, 4 of us popped down to the pub for a drink or two. On the way we found that a new curry house had opened right next to the pub, so we booked a table for our Saturday evening meal.

Saturday morning saw an early start to have breakfast and get to Donnington Park. We got there in plenty of time to sort ourselves out and discover who our first opponents would be. We'd been drawn against France B. Do not let the "B" fool you - these guys are probably some of the top players in Europe (let alone France) and would be very highly placed in world rankings.

I'll be doing AARs of all the games over the course of this week, so I'll leave it there for now and skip to the results. 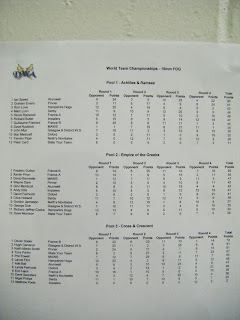 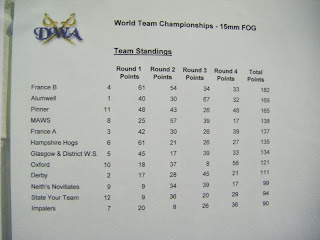 We were rather worried going into the final round as we were in 9th place. How could we uphold our reputation, being placed so highly? We were even at risk of going up into 8th or maybe even 7th place! In the end we did manage to drop down to 10th place, but that was still 2 places higher than our target *sob*. Our heads hung in shame.

I had 3 games that were very enjoyable (even if I did lost 2 of them). Unfortunately I had one game where my opponent was, errmmmm, "difficult". Yes, I'll go with "difficult" as a description of him. I'm sure some of you reading this will know the type I mean.

Just to give you some idea of how big the tournament section of the show was, here are some pics: 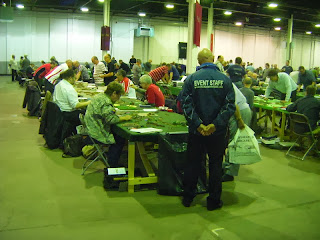 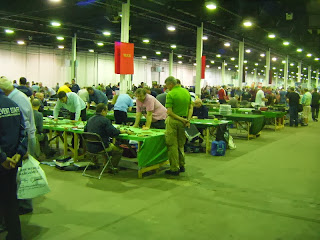 I would guess that the tournament area took up about 40% of the overall floor space with the rest being for the trade stands and demo or participation games. Unfortunately, I didn't get much chance apart from an hour or so on the Saturday lunchtime to take a look around. There was one advantage to that though - I didn't buy very much. In fact, my only purchase was two Vallejo paints.

It is very much a huge barn and the lighting wasn't great for photography (almost all my pics seem to have a green tinge) but fine for the gaming. It did get quite noisy at times but not enough to be a distraction when concentrating on the games. Very occasionally we could hear planes flying over or go-karts on the adjacent track. I think the very high ceilings and air replenishment from open doors helped to eliminate the game(r)y smell you often get at shows and tournaments.

The only toilets I can vouch for the state of were the ladies loos down at the tournament end, which were clean and well stocked with toilet paper and hand towels. I remember that there were complaints about the gents toilets last year but as I obviously don't use them I have no idea if the problems had been resolved for this year's show.

Catering was about typical in cost and quality for venues like this (somewhat expensive, not particularly high quality).

As I only had a brief tour of the trade show, I can't comment too much on it. I did get the impression that they may have tried to cram too much into the allotted area which meant that the walking spaces between were quite narrow. There did seem to be more space around the demo and participation games.

The organisation for this was superb. Tables were all covered with suitable cloths and there was adequate space between rows for people to move about and watch games if they wished. Each tournament had an admin table centrally with a laptop and printer to allow results to be entered, collated and results and next round draws to be printed out within a few minutes of the final game ending. I didn't see all the prizes and trophies, but what I saw looked to be fairly nice.

Over the weekend I did get to meet a few bloggers:
Loki
Kev
Ian
PanzerKaput

It was great to finally meet all of you, even if we didn't get much time to chat. I know that a couple of others were there, and I'm sorry I missed you. Maybe next year or at some other event?

As I said earlier, I didn't buy very much at all. I did bring back a couple of other things though. 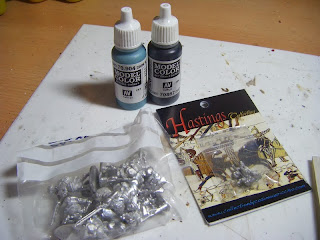 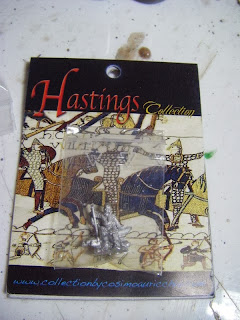 The Hastings Collection was a free sample being handed out to FoG:AM players (and possibly some others) on the Sunday. There were various different ones handed out. Mine appears to be a Saxon housecarl taking a well-earned breather on a pile of cut logs. The casting looks very nice. The company they are from is Cosimo Auricchio.

The other bag of figures are some AW French Indian War coureurs. Unfortunately they aren't for me to keep - they are my painting contribution for the Bloggers for Charity game next year. Loki gave them to me on the Sunday morning.