Gordon needed a practice game for his Late Dynastic Egyptians before the tournament this weekend so I agreed to help him out. So, on Monday night I turned up for a game using the Mid Republican Roman army he had brought along as opponents.

Hmmm, Romans. How to deploy and use those? Oh well, suck it and see.

Gordon passed the initiative to me, so I selected "Agricultural" as the terrain type. For my compulsory open field, I went for a large (16" wide) piece which landed slap bang in the middle of his base line. I was quite pleased with that as it would play havoc with his deployment.

So, some pics of the game and some blurb to explain what's going on. 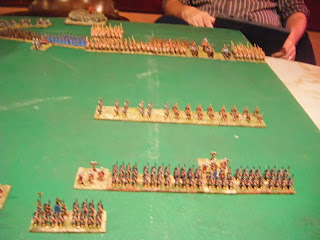 My right wing after my first move. Gordon's entire first move consisted of advancing the skirmishers on his right wing - the main body of heavy foot stayed put for several turns. I'd very sensibly (= jammily) been able to stack all my veteran legions (superior Hastati and Prinicipes; elite Triarii) on my right where they would face Gordon's best battle troops. 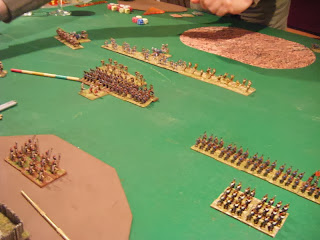 My centre and left wing. the Legions here were average. There was a small unit of Italian auxiliary medium foot which I left in front of the camp. Facing them are some superior (yikes!) skirmishers. He also had two units of javelin armed light horse trying to sweep around my left flank. 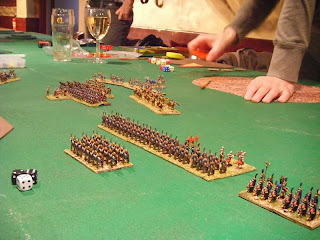 Legions advancing on my left flank. I think the dice were a cohesion test from shooting by the skirmishers (I passed!). 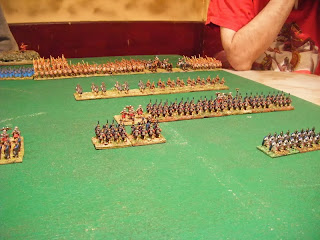 The right wing advances. Heavy foot move very slowly, so it took several terms for the main battle to commence. 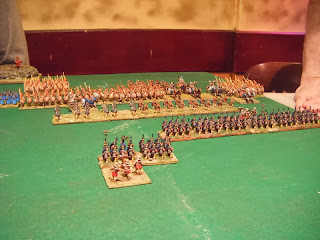 Finally getting close. Gordon's spearmen have finally moved, to present a flat frontage. In case you are wondering, the artillery bases are actually my commanders as Gordon doesn't currently have any Roman commanders painted up. 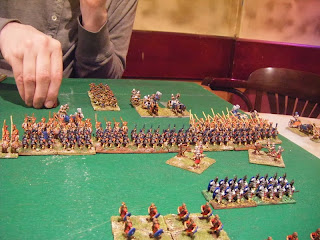 I can't remember whether I charged or Gordon did, but his dice in the impact phase were dreadful which was very nice for me. His chariots lost a base and went disrupted, then lost another base in the melee. As my legions were still steady, he had to break off. 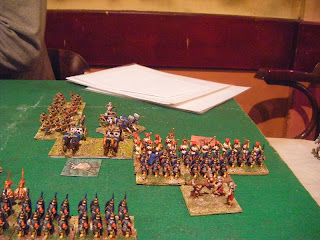 And my right-most legion has broken his hoplites (and killed their general). 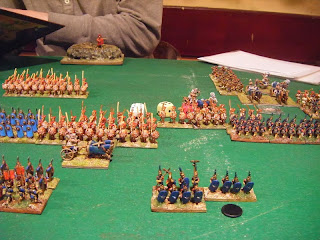 Unfortunately, my 4-base legion broke in the same melee, but the hoplites facing them couldn't pursue as they were still in combat. 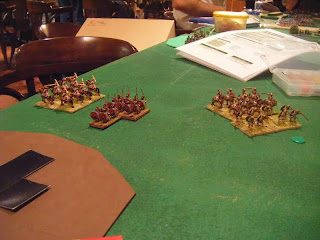 My light foot decided to stand when charged by Gordon's light horse (the light and medium foot had been herding those pesky horsemen for the previous turn or two). 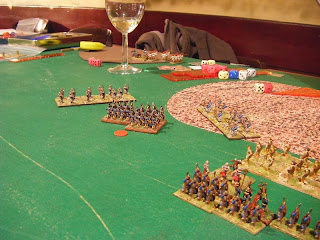 My left-most legion didn't like being shot at all the time by those bleedin' superior skirmishers and had dropped to fragmented (and were soon to break). The neighbouring legion had shown a great reluctance to charge the skirmishers facing them, rolling "short" or "very short" for their charge distance each time. 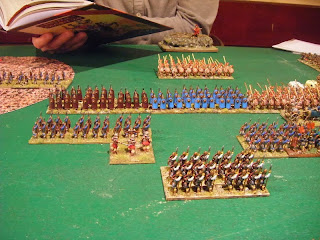 My centre legions close in on the Egyptian spearmen, with their Triarii (superior offensive spearmen) move up into the gap. 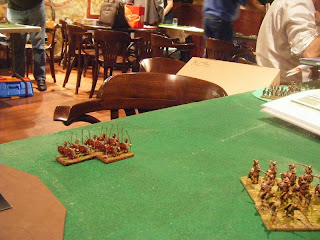 ....and now you don't!
Light horse unit charged by the Italians and forced to evade off the table. Meanwhile, my velites are still holding up against the other light horse unit. 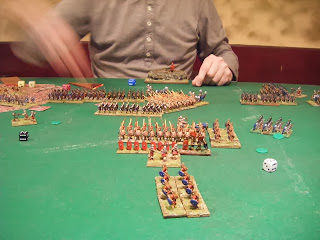 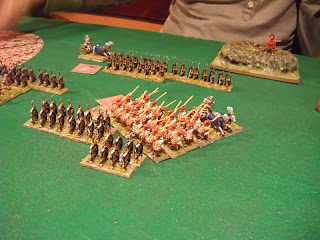 A close up of what happened. Gordon's right-most unit lost the melee, then he rolled very badly on the cohesion test and he double-dropped to broken. The unit next to it had been dropped to fragmented, then failed the CT for seeing the break and routed through the hoplites behind disrupting them. My pursuing triarii pursued the routers into the flank of the hoplites, dropping them to fragmented even before the impact phase. 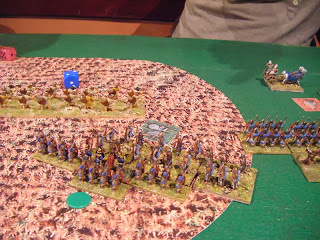 The dawdling legion has moved into the large open field and charged some medium foot archers. I was on a ++ at impact and would be on a ++ again in the melee. 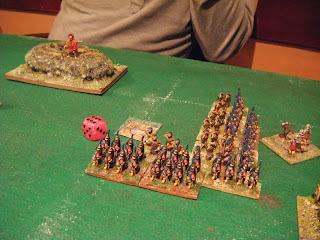 I haven't shown the right wing for a while, so here is a shot of the final position. My right-most legion kept advancing after pursuing the hoplites, then turned to come around behind the flank. Gordon's chariots, reduced to 2 bases managed to drop to fragged after seeing another hoplite unit break so he very wisely decided to get them out of the way. They then charged some medium foot bowmen, disrupting them. Two turns later their colleagues joined in, charging the bowmen in the flank. That was the final point I needed to rout his army.

The overall result was that I'd broken 4 of his 14 units, fragged another 4 and forced one to evade off my baseline. In exchange, Gordon had broken 4 of my units (the light horse had eventually broken those velites, but it took them several turns of melee to do so). We had both managed to kill 1 general in combat.

Given that I managed to beat him using them, I don't think Gordon is relishing the prospect of facing Romans handled by better players at the tournament.

Anyway, this will be my last post before Sunday. I'm hoping to meet up with a few of you at "Derby" (actually Donnington Park) this weekend, assuming I get enough time between games! I promise to take plenty of photos over the weekend and will attempt to get reports of all 5 games written up next week.