OK, it's been a couple of days since I last posted, so it's definitely time for an update.

I did take my camera, but ended up not taking any pics. Sorry about that. I was too busy playing or checking rules.

Anyway, 3 of us were playing - me, Simon and Seb - and plenty of others from the club popped over to our table for a look. Simon and I started off with the quick-start game to get the hang of the basics, then repeated it using the full rules. At that point Seb arrived and I gave him a game, then he played Simon but they got more ships onto the table. The final game saw me with 4 TIE fighters (2 x Academy Pilot; 2 x Obsidian Squadron Pilot) taking on the Falcon piloted by Chewie. We were running out of time, but after several turns I had 2 TIEs 1 hit away from death (the other 2 undamaged) and the Falcon was getting very close to being put out of action.

We all agreed it is a fun game and will make a good break from our usual FoG:AM and FoG:R games.

Having looked again at the Blue Moon and rebel Minis pirates I'd already received, I worked out how many more I needed to make up the army and have ordered them.

As it was the weekend, I decided it was time to start work on the ship. I filled the worst of the bubbles and gaps with plastic putty. After that it was cutting out the gun ports on the open deck, drilling holes into the other gun ports for the gun muzzles that came with it; measured  and cut the metal ladders; then glued all the metal parts in place. And then I kicked myself. I shouldn't have glued them in place until after I'd washed the resin ship to remove mould release agents. Oh well, I just had to be careful with how I did the washing.

This morning I spray-primed it with matt white paint, then left it to dry for a while. 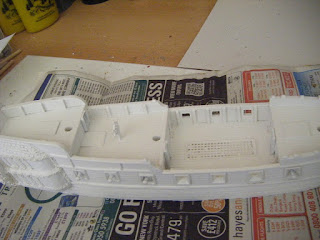 This evening I've been doing the base coats. For some reason, the Galleria raw umber paint didn't seem to want to go properly on over the white, so it looks a bit messy in places. For the decks I mixed in some yellow and white Crafters' Choice paint, which seemed to give slightly better coverage, but it was still messy. I guess the white spray paint doesn't have much "tooth" so was too smooth. I finished off that session by doing black for the stern panel, the bowsprit &keel, the grating over the ship's hold and the gunports and muzzles. 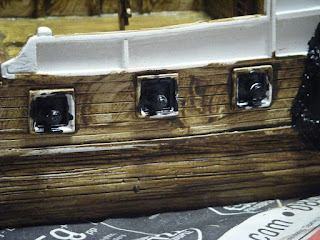 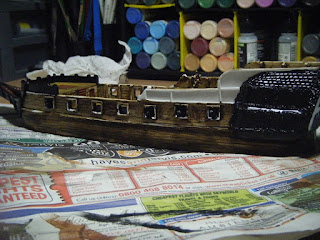 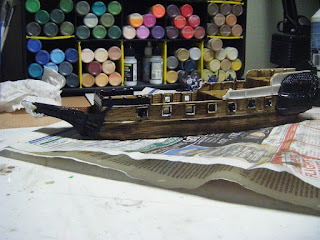 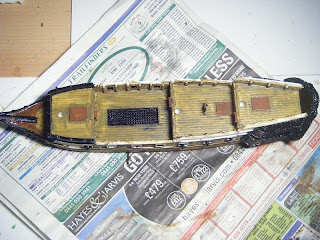 Since taking these photos I've done a little bit more. The gun port frames have been painted blue; the figurehead, stern-piece and windows have been given sky grey basecoats; and panels have been painted either blue or red. I've also gone over the hull with Vallejo burnt umber. I've also had to reinforce the ship's wheel as the metal was too weak and kept bending.

Now that I've got the bulk of the ship done, I'll just do little bits here and there over the next week or two. I still have to sort out the masts and sails - I need to get some doweling and some material.
Posted by TamsinP at 23:23