Workbench and Shinies 15 February; plus Podcasts

Eeeeeks! I haven't posted here for a couple of weeks. I guess I should give a quick update on things.

My house purchase (and move out of London) isn't going ahead - a second viewing before exchange of contracts (and payment of the deposit) revealed that the works I had thought could be done after I moved in would need to be done beforehand. With all the furniture out and the central heating turned down it was also clear that the issues were more extensive then originally indicated by the survey and my first viewing. There was no way that I could realistically arrange and oversee the works from London, so I withdrew my offer.

1. I'm back to square one on the hunt for a house out of London. I'll probably leave it a couple of months before looking again.

2. I can resume painting figures and terrain! And I have made a start! 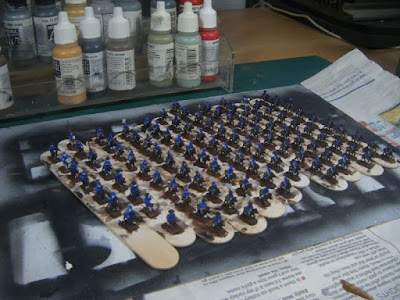 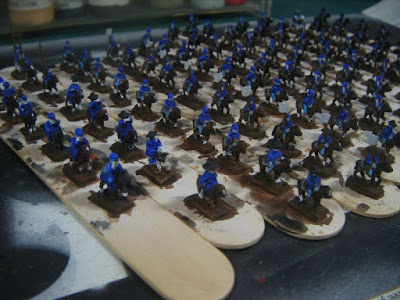 Yes, I have (finally) returned to my 6mm ACW project. Well, they were primed just over four years ago and a simple enough project to take on. The only trouble is I keep getting distracted, so they are taking longer to paint than they should. I've started with the Union cavalry and generals; I have the same quantity of Confederate cavalry and generals, plus some artillery, limbers and dismounted cavalry to do when these are finished. I'll be doing all the basing in one go.

As it will be a good few months before I move home, it also means that I can order figures and stuff without worrying that delays could see packages being delivered to the wrong address. I placed an order about two weeks ago and the figures arrived today: 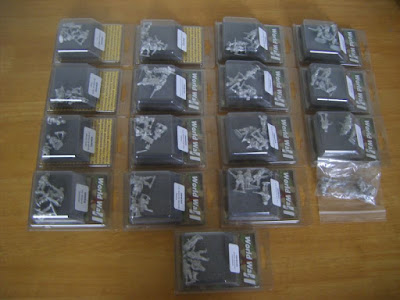 In case you can't see in the photo what they are, 16 of the packs are US Airborne and one is the British Airborne senior officers pack. Why Us Airborne? Well, these will be for my New Guinea project to represent the 503rd PIR who first saw action in the Lae campaign.

The distractions which have interfered with my painting also distracted me from posting the podcast link last week, so you are actually getting the links for two in this post.

In case you are wondering why they are episodes 63 and 65, it's because Tim inserted an aDLG list-building discussion as episode 64 in between.