Before I get onto the stuff relating to the title of this post, just a quickie about what I've been doing with my two days off.

Yesterday started with chores, mainly related to shifting furniture around in my living room and then assembling the last of my bookshelf units. This one was a bit more fiddly as there were two drawers to assemble as well. With that in place I was able to transfer most of my wargames rules, Ospreys and magazines to them.

Today I spent a bit of time prepping figures - they've now been washed and are drying off on kitchen towel now. I also decided to do a test paint on one of the latex river sections. The paint went on very nicely, but I did make a bit of a booboo - I added static grass before applying a coat of Klear so some stray fibres got trapped in that. Tomorrow evening (back at work unfortunately) I might have a go at stripping the paint and flock off. Anyway here are a couple of pics, including the "flex test": 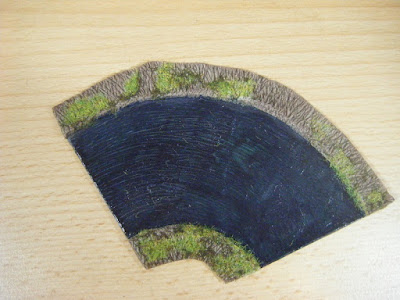 I'm not sure about the colour - I did a base coat of Paynes Grey then wet blended some dark green in. I think it looks a bit too blue, so maybe doing the two colours the other way round and perhaps wet blending in some streak of a lighter green would look better.


So, 1066 And All That. Last night saw the second of two big multi-player games of ADLG organised by Gordon. I missed Stamford Bridge last week as I wasn't feeling brilliant, but did make it to the club for yesterday's refight of the Battle of Hastings. I was given command of the Breton contingent.

The Normans and allies started off table and in the first turn would deploy into a box representing the base of Senlac Hill, roughly opposite the centre of the English line and then carry out their first moves. The Normans were given 4 minutes per turn to complete any moves; the English only got 3 minutes. Naturally this added quite a bit to the friction, particularly for our first turn where we also had to transfer troops from one table to another. Especially as I found that the Fleming & French contingent who only had three pips were blocking my Bretons from actually moving out of the deployment zone! 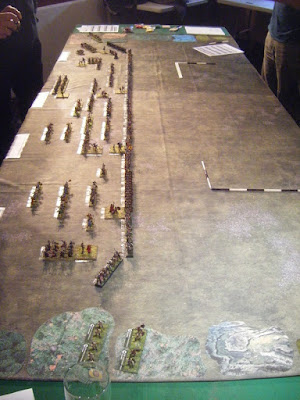 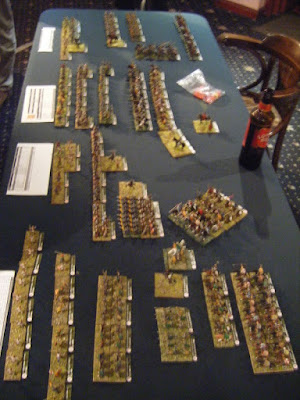 My goal was to try to get around the right flank of the English, using my light and medium foot to go through the difficult terrain there. My cavalry (no knights for the Bretons) were meant to act as a threat and to exploit any gaps. Given that my contingent had the furthest to travel, it would have been better if the Flemings had deployed behind us, but our CinC decided otherwise...

Things got rather chaotic so I didn't get many pics, but here are the ones I did take: 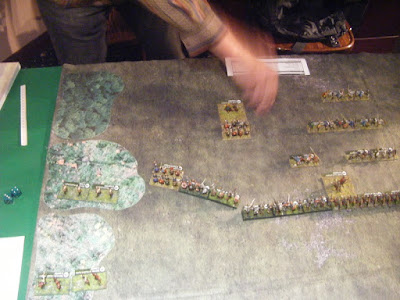 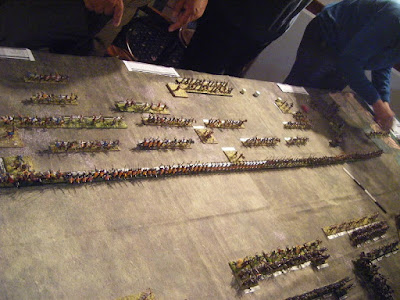 Fighting uphill meant that at best the Normans would be on evens at impact and usually down in melee. Almost all the English facing me were armoured, which meant I'd need fluky dice to do any damage to them. It didn't help that I'd forgotten that light troop shooting benefits from bases behind as well as to the side.

As the game wore on, and given how badly the Normans and Flemings were getting mauled (being down at least one factor and then having crap dice) we decided to throw everything we had into the battle line, so I charged in with my medium foot and medium cavalry. Against (mostly) undamaged, armoured heavy foot. You can probably guess how that went.

To my right, the Flemings had managed to lose both of their commanders to "Jeavon the General Killer". Billy B'tard threw himself into the fray to try to help out. On his second try, Jeavon managed to "Kill Bill" making three generals from four attempts: 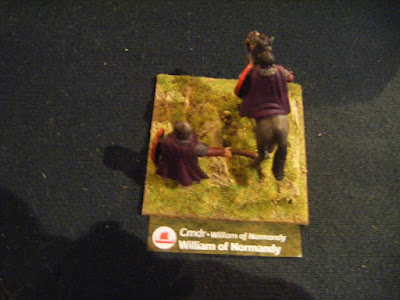 It was a good game overall, despite the reversal of history. It probably didn't help matter that the English players mostly had plenty of experience with ADLG whereas the Normans (especially the CinC) generally had very little.

It may have been better for the Normans to be allowed to deploy anywhere along the baseline rather than being restricted to the central deployment zone. Another thing that might have made the battle a bit more even would have been for either the Normans to have slightly more points than they did or for some of the English to have started with reduced cohesion to represent fatigue from the long, fast march South.

Just for the record, all the figures were 25/28mm from Gordon's collection.