I was feeling OK today so I did go to Salute. Lots of shopping, lots of looking at games, lots of photos taken....

....unfortunately most of them turned out to be blurry. *sob*

Here are the pics that turned out OK: 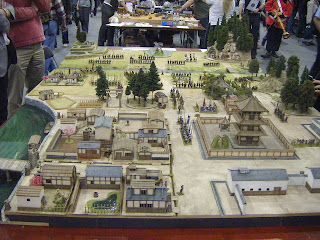 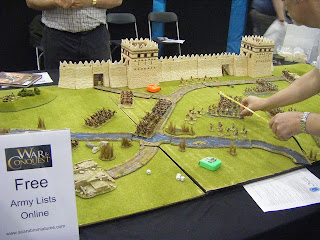 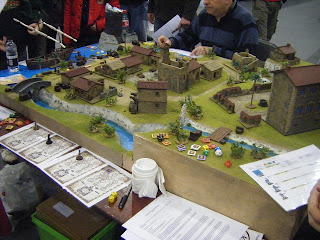 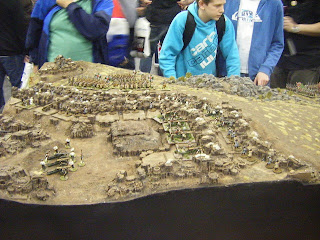 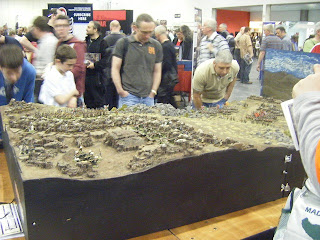 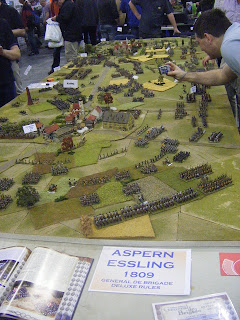 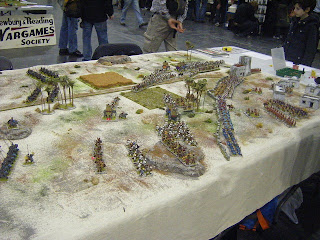 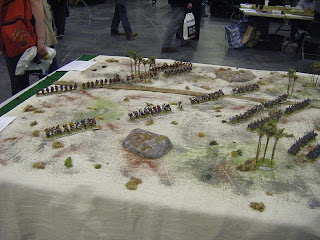 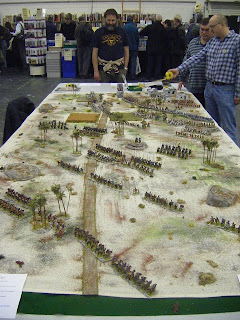 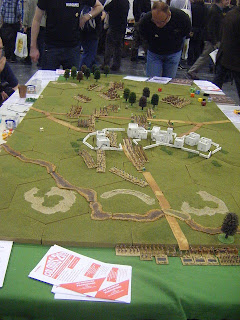 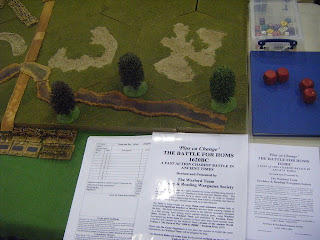 I can't remember what all the above games/tables were as not all had obvious signs to photograph. The 4th and 5th pics are the Sevastopol table by Wargames Illustrated, the new issue of which had actually been delivered while I was out.

Whilst doing the rounds of games and traders I bumped into several members of CLWC and also Henry Hyde (editor of Battlegames, charity fundraiser, bon viveur and "old school" wargaming afficionado) and had a brief chat. He introduced me to the chap he was talking to - Mike - who said "We'll be doing something together in an hour". Cue, puzzled look from me, then an explanation "Mike Whittaker - Trouble at t' Mill". Penny dropped.

Having trudged outside the Excel centre for a nicotine top-up (I know, I know - filthy habit), I headed back in for the 1-2pm "Bloggers Meetup". It was good to meet up with so many of the guys I've got know over the past few months of blogging, in no particular order:
Fran, Ray, Big Lee, Postie (OK, not a blogger but he's infamous as the Great Dictator of the Rejects), Mike W of course (he's already been linked and doesn't get a second one!), Dave D, Dallas of the Fawcett Avenue Conscripts, Curt of Analogue Hobbies, Mini Mike, a couple of others (sorry I've forgotten your names) and not to forget.... 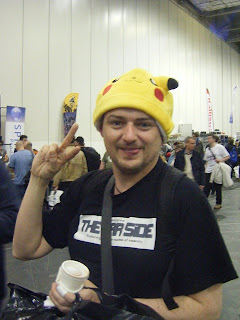 Fran got his prize from my recent draw and we posed together for a couple of photos - I'll nab them from other blogs when they get posted and add them here.

We spent a while exchanging banter, catching up, comparing purchases and stuff. Fran took me to one side and made me an offer I could not refuse:

"We've had a reject drop out of our game tomorrow and would like you to join us"
"How could I possibly refuse?"
"OK, speak to ray and he'll sort out about collecting you from the station"

(the above is not a verbatim report, but a reasonable precis)

So, my painting plans (OK, washing and dry-brushing lots and lots of bases) for tomorrow have gone out of the window, and I'll be heading down to Gravesend to play a large game (6' x 16' table) of 15mm Fire and Fury with Ray, Fran, Big Lee, Curt and Seb with Postie as the Evil Umpire. Should be a great day.

"That's all well and good, but we want to know what you bought!"

"Now, look here - I'm getting rather annoyed by all these pitchforks and burning brands. You know that there will be pics or tales of expenditure, so they are simply unnecessary." 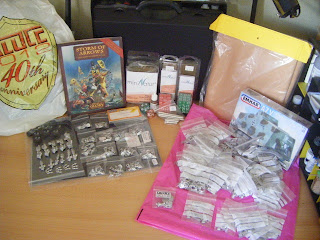 Figures in Comfort - Skirmish case with 2 pluck-foam trays for my spaceship minis when I finally get round to painting them and some Litko flight pegs (to use as ship holders while painting them!).
Paul Meekins Books - Storm of Arrows army lists for FoG:AM
Harfields - a 1:72 scale A7V WWI German tank from Emhar (this will be the basis of a sandcrawler for my Chewks)
Caliver Books - a Vallejo paint that always seems to be out of stock at ModelZone in Holborn
(can't remember which trader) - some MiniNatur flock and tufts; felt cloth; 40mm measuring sticks; packs of D6 dice.
Magister Militum - 2 "D10 in D10" dice for when I'm playing Ironclads
Magnetic Displays/Coritani - some box-file size magnetic sheets
GZG (on top of the magnetic sheets)- some NSL spaceships (escort carrier, 4 escort cruisers, 6 destroyers, 12 fighters); 8 packs of 15mm UNSC troops; 15mm NAC medics and casualties; 15mm New Israeli support weapons; 15mm surveyors, civvies and guards in light vacc suits.
Jon "The Evil Man Who Makes The Shinies We Must Buy" Tuffley had a good chuckle when I handed over my list: 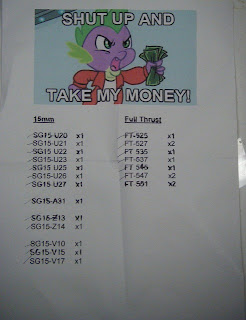 I was pleasantly shocked when I was told the price - less than £60! I don't think I've ever got away from his stall having spent that little before!
On the stall he also had some very nice looking new toys - large 15mm mecha (which seems to have three variants). I'm not really a fan of mecha/walkers (I'm more of a "hard" sci-fi type), but could definitely see myself buying a couple of those at some point. I won't be naughty and grab someone else's pic, and will instead give you their link: https://picasaweb.google.com/lh/photo/VtF2vDzm7m6LcxyN1MzppNMTjNZETYmyPJy0liipFm0?feat=directlink

Donnington Ancients and Moderns (on the pink bag) - not a purchase but a collection (I'd ordered before the show), my Thirty Years War figures, plus some camp accessories and 3 Sarmatians to make up a fourth command group.

All in all a very good day, although I completely forgot to learn my lessons from Colours and SELWG last year:

Maybe I'll have learned by the time of the next show I go to. Hmmm, I think that might be Campaign....