I was intending my post today to be AARs of the ADLG games I played yesterday. But I forgot my camera, so there were no pics. I was giving my opponents some practice ahead of the club's one-day competition later this month - the theme is late medieval, so I took a Burgundian Wars Swiss army.

My first game was against Mike R's Order of St John; followed by Dave S's Medieval Spanish (Castille) list. I lost both games, but could have won both if my dice rolls for some crucial combats hadn't been so awful.

However, it was a useful learning experience for me as I now know how to adjust my list for future games - less pikes, more halberdiers (and upgrade some to Elite) and more light troops to make the army a bit larger and more resilient.

With that wittering out of the way, on with today's workbench post.

Today I have mostly been drybrushing the Gaslands scrapyard terrain pieces. I've also glued the spare cars onto some of the bases to add some height. 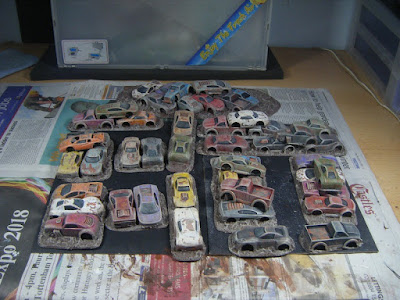 Tomorrow will see me giving them all a dirty brown wash and when that is dry I will be adding some static grass tufts.
Posted by TamsinP at 19:51