Yesterday's post was a write-up of the background and the email campaign leading up to Sunday's game. If you haven't read it yet follow the link, make yourself a tea or coffee (or pour yourself a beer) and settle in for a bit of a read.

So, on Sunday morning Chris and I got to Gordon's early to help with setting up - we were both providing some figures (Chinese and Koreans) for the game. It turned out that there would actually be two games in separate rooms. Upstairs, a small battle between the Korean field army under Eon Go-baek (Clive) and the Japanese 6th division under Kobayakawa Takakage (Mark).

For some reason all the Korean infantry units have banners declaring "Eon Go-baek is a useless cowardly traitor, We want Hyujeong as our General and Leader".

The main battle was downstairs where most of the Chinese field army (with the Haengju garrison and some monks from the Army of the Sangha) would be facing off against the bulk of the forces from the other three Japanese divisions. 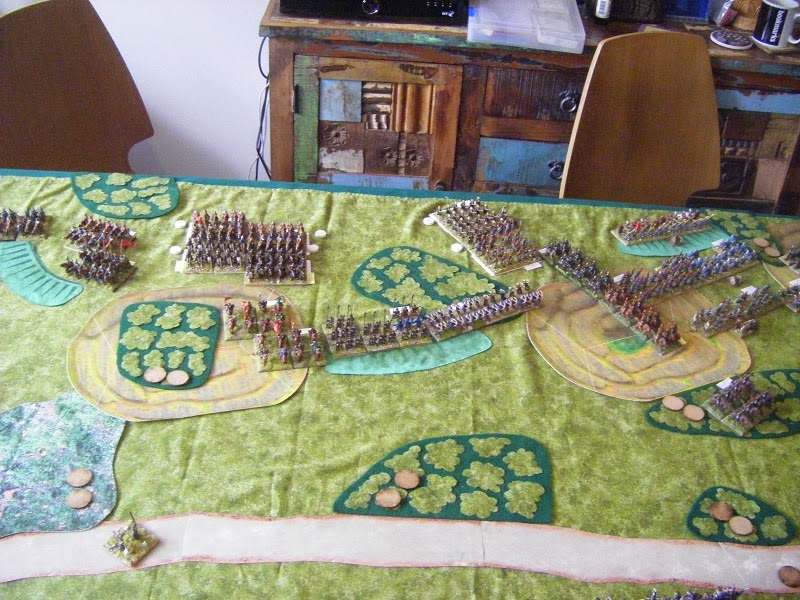 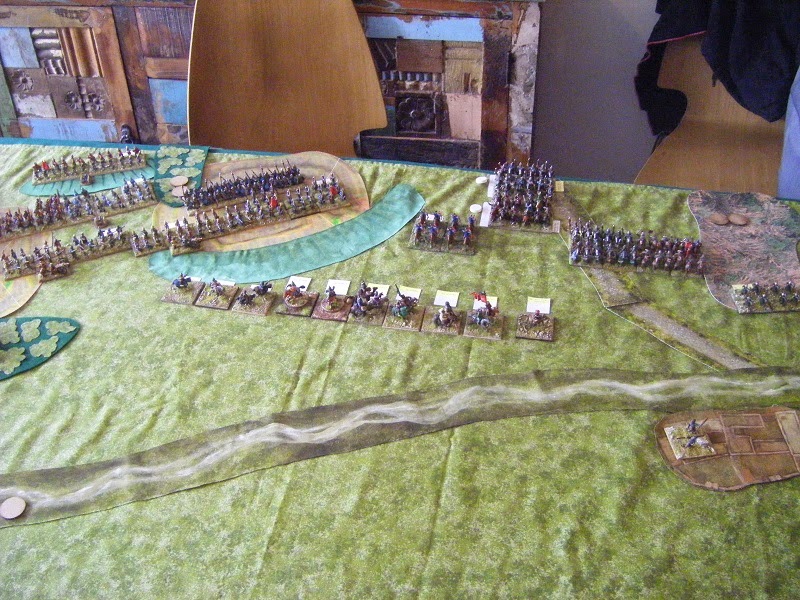 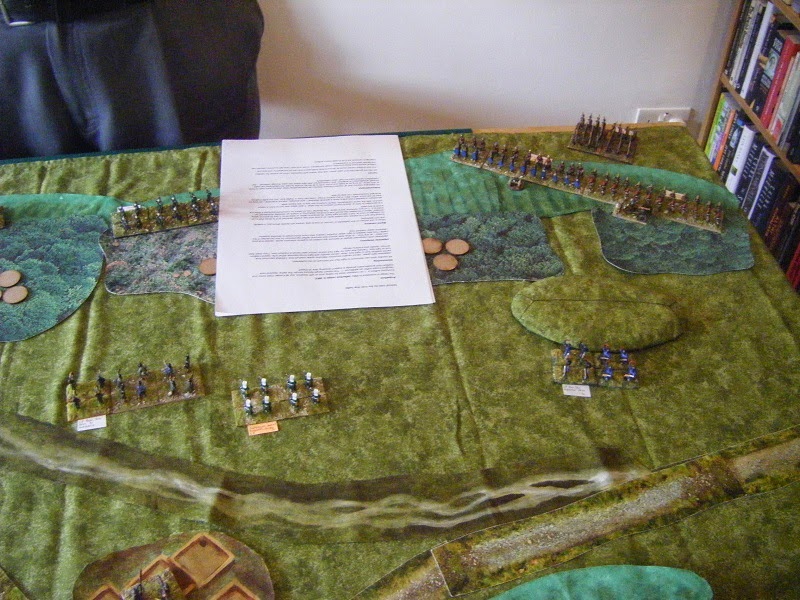 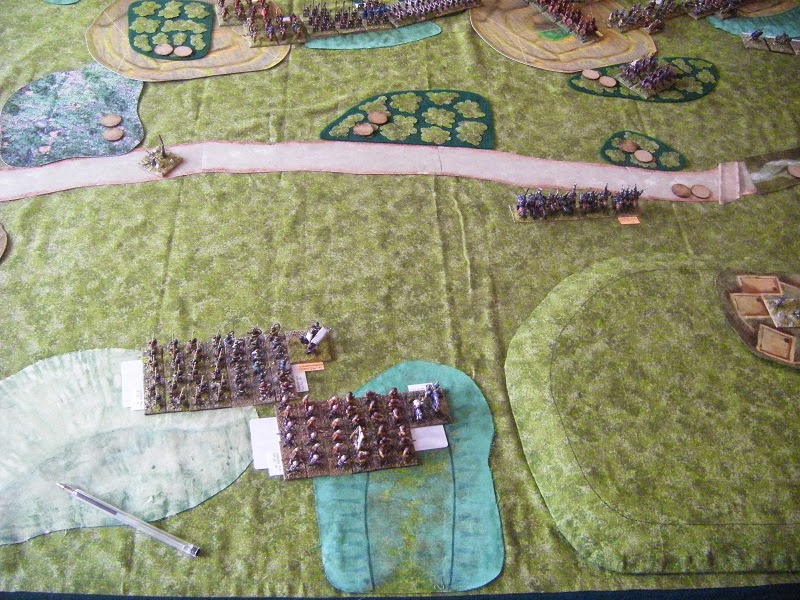 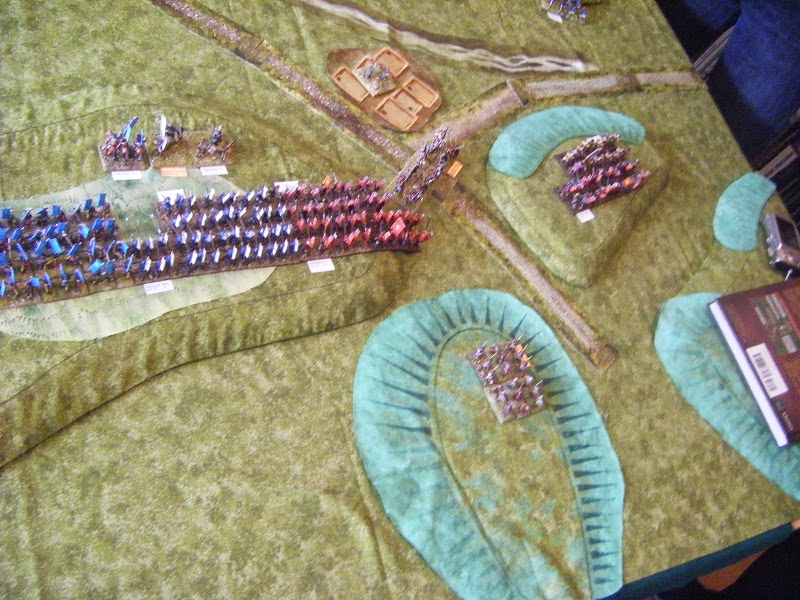 A (not very good) shot of the whole table:

The battlefield represents about 4-5km of ground East of Haengju heading North from the Han river.

Gordon told me to set out 4 bases of monks and a monk general base. They may or may not appear at some point. If Hyujeong (aka SongUn) was present, these had to be my "brigade A" 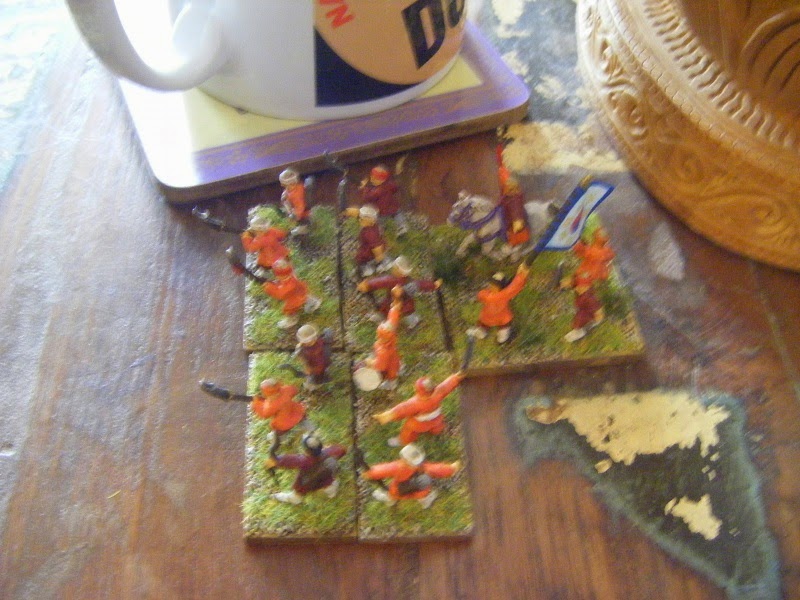 There were two bases of monks deployed on the table, representing about half of "brigade B" which had joined up with the Haengju garrison: 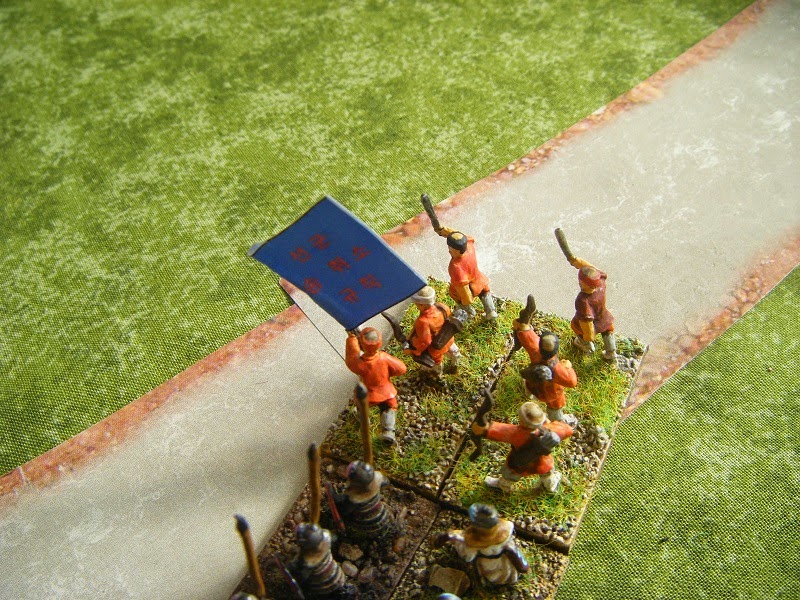 Over the following hour, the rest of the players arrived and we kicked off the games at about 10am after some chit-chat. Clive and Mark went upstairs for their side-battle, with Gordon going up to brief them on various matters. I was downstairs, so I wasn't able to take pictures as the game progressed.

Meanwhile, downstairs the main battle was ready to go. Chris and I split the Chinese/Korean forces between us - I took the right wing, Chris the left. Superintendent Song YingChang (Martin) wasn't able to join us unfortunately. After distributing our generals we waited for Gordon to come back down to confirm and explain any special rules and terrain. He'd previously emailed out some proposed special rules. One was that all Korean troops should face an additional minus on cohesion tests (= morale) where they are the result of arquebus fire. I successfully argued (using historical evidence* and events from the campaign**) that this should only apply to the Korean field army, not to the Sangha monks.

*At the retaking of P'yongyang the monks under Hyujeon led the assault on Mount Moranbang in the face of intense arquebus fire without faltering.
**"Kyoha-ri - glorious victory for the Righteous Army of Sangha!"

The Chinese/Koreans had initiative and so, Chris and I carried out our first moves. I was hampered by a number of things - lots of cavalry in a small area, lots of rough terrain to slow them down, a river (also rough terrain) to cross, not enough generals to double-move all the troops. Oh, and four of the cavalry were in "column of march" and would need to take a turn to deploy. This inevitably created some traffic jams, especially with some of my idiotic moves. 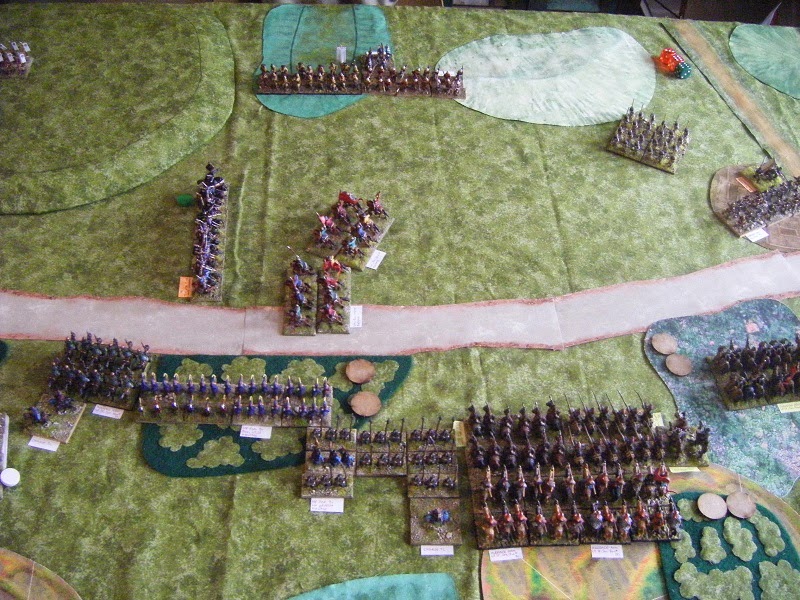 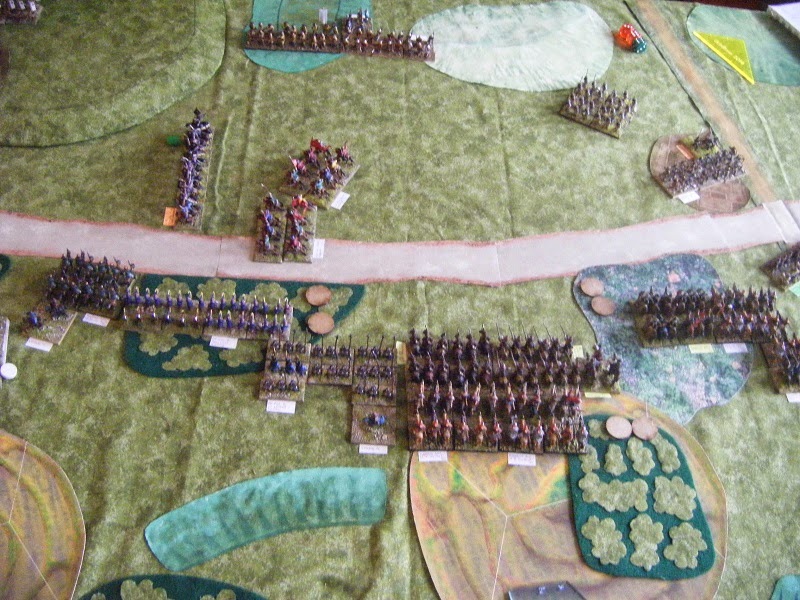 At this point (after the Japanese had done their charges) Gordon announced that some Japanese troops routed onto the table at the North end, running into the back of some of Chris' Chinese troops and dying. 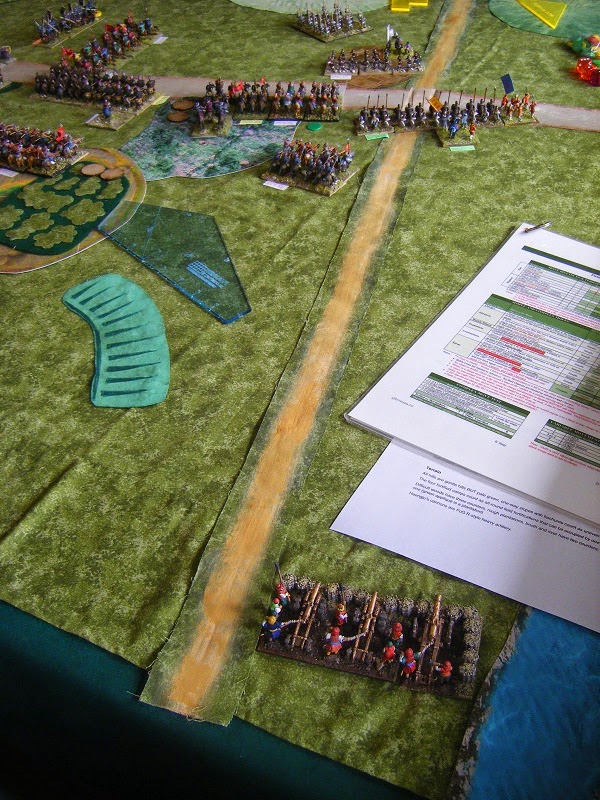 We then broke for a short while as the side-battle had concluded upstairs and Mark had to head off early. It transpired that Clive had won that battle, which was about 15km North-East of ours. 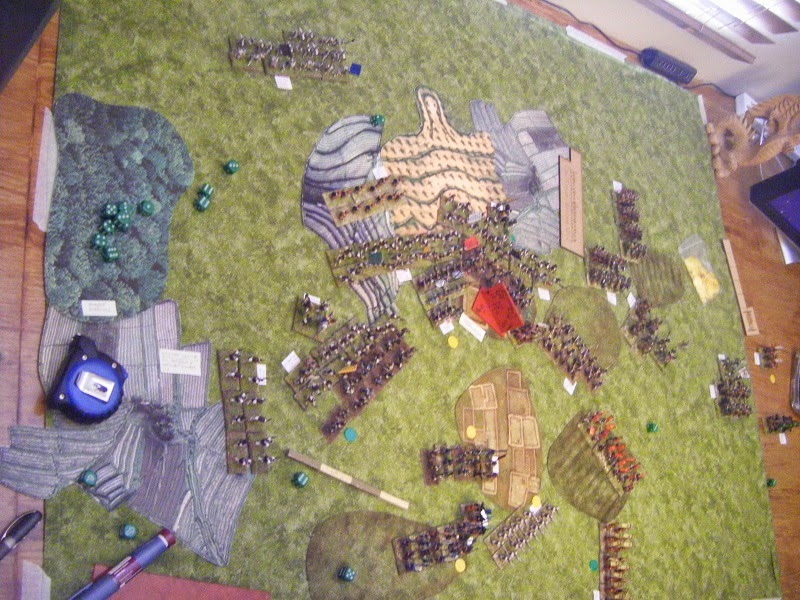 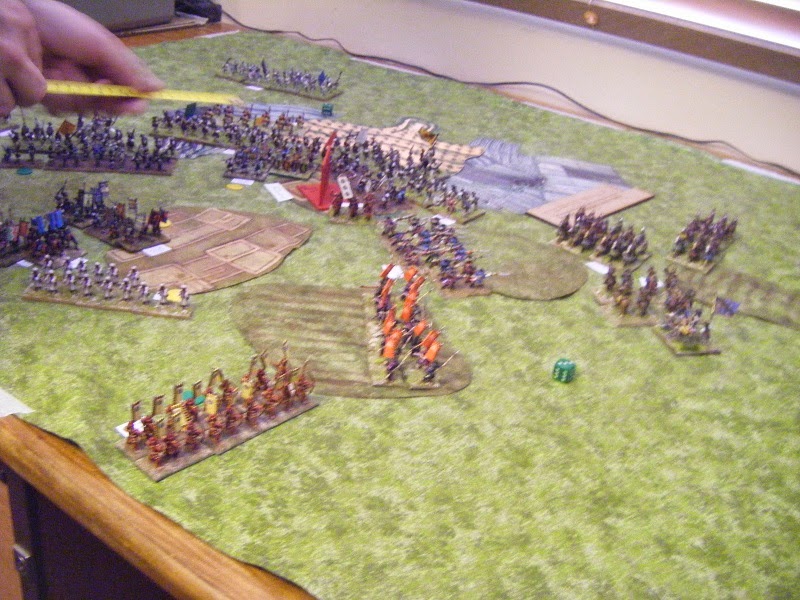 Before Mark could go, Gordon wanted to announce the prize winner of the role-play part of the campaign. For each player he read out his notes of the things that had earned and lost them points. These reports were hugely entertaining and some of the things people had done were a riot (but probably in-character). There were assassination plots, secret treaties with the enemy, acquisition of supplies by dubious means, unauthorised usage of fleets  ("No, no, no. Not me - I'm an honest monk. Honest guv!"), famous victories, invitations to the families of fellow commanders to enjoy hospitality on your estates, the burning down of Seoul (Boo! Hiss!) an many other things.

It turned out that I had won, squeaking it from Mark by one point. This was my rather splendid prize:

Clive joined Chris and myself and took control of the Chinese centre for the rest of the game. We then played out the rest of the Japanese turn and started the next Chinese turn while Gordon cooked lunch (Japanese food washed down with Japanese beers - lovely!).

After lunch we resumed the battle.

It seems that SongUn's brigade had encountered, fought and defeated a Japanese brigade that had been guarding a supply dump about 1km North of the battle. Gordon decided that on the basis of the two battles they had won, they should be uprated from Superior to Elite. Not that it would make much difference with them being on foot and stuck behind Chinese units. 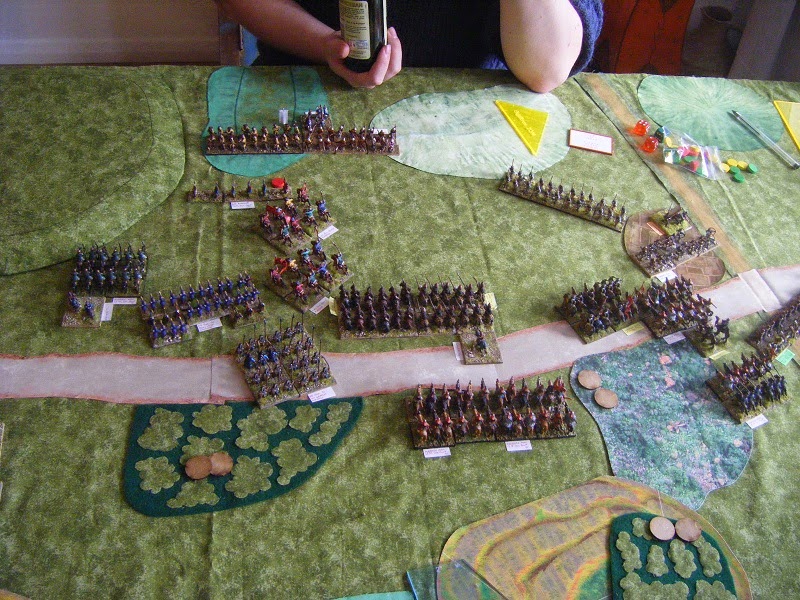 The fragmented Samurai wisely decided to dismount as light foot, then got broken by concentrated shooting and routed toward their table edge.


The routing cavalry on the left had charged his spearmen at the rear edge of the table along with a second unit (which you can see in front of the two units at the top left). This was rather silly of me as they didn't have to charge and could have shot them up first to drop their cohesion so their spear wouldn't count at impact or in melee. The unit that broke had massively lost at impact and succeeded in rolling a double-one for the cohesion test, dropping them to fragmented. They also lost the melee and rolled a one and three for the cohesion test, breaking them.

Hindsight is a wonderful thing, isn't it?

The other broken unit was equally unlucky. They charged into the melee next to the fort, lost at impact and lost in melee. I can't remember which one caused the double-drop.


With all the traffic jam issues and fights going on at my end of the table, I neglected to keep an eye on (and take pics of) what was going on in the centre. As it turns out, the Chinese left had been very successful and Chris was breaking through Andy's Japanese division. In the centre it was mixed but looked increasingly to be in favour of the Chinese, as Chris and I would soon be feeding troops in on the flanks (by this point I had already got some cavalry up onto the hill where the Japanese centre's left flank was half exposed). Within a few turns the rest of the Chinese field army would be arriving and maybe the Koreans.

We declared it a win for the Chinese and Koreans.It was a very enjoyable game.

Is there anything I would have done differently? Oh, yes...

I'll leave you with some pics of my prize: 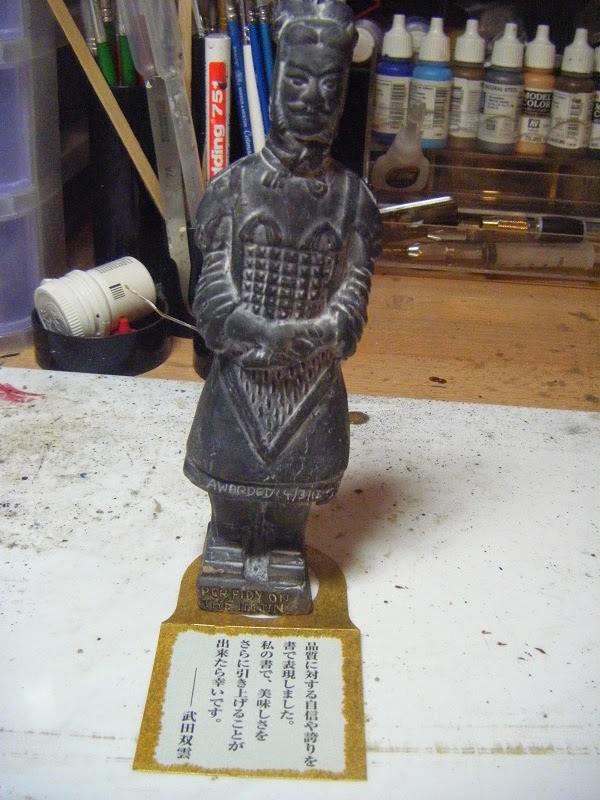 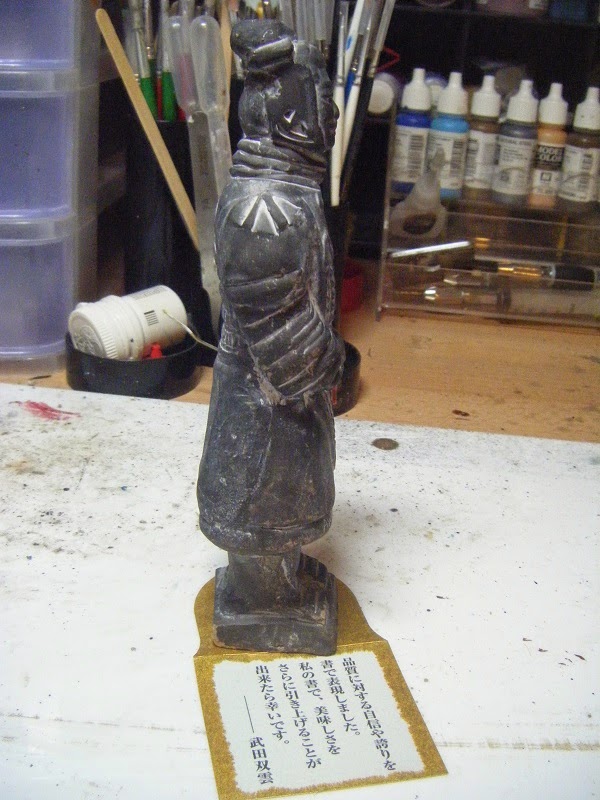 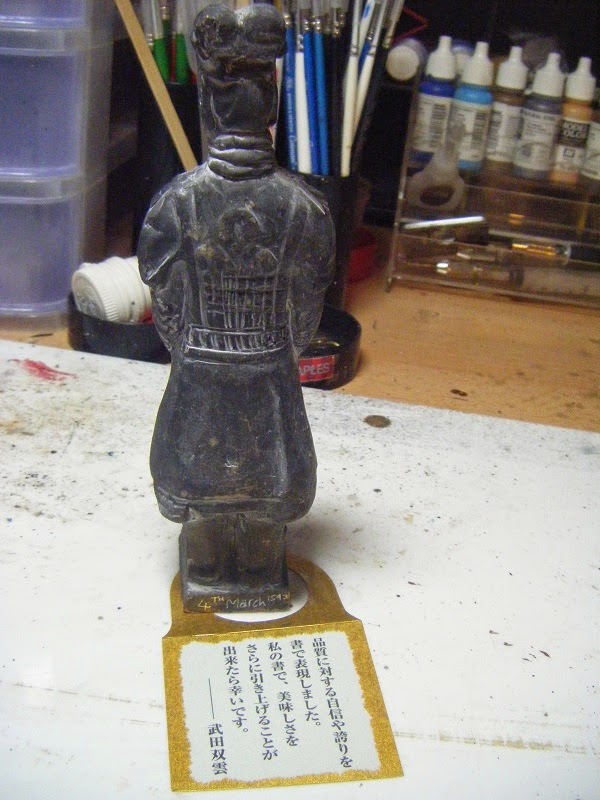 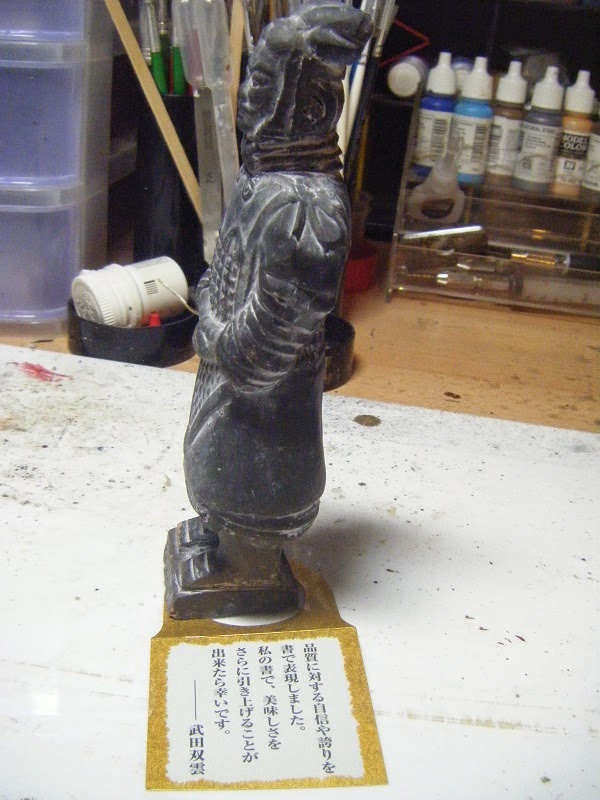 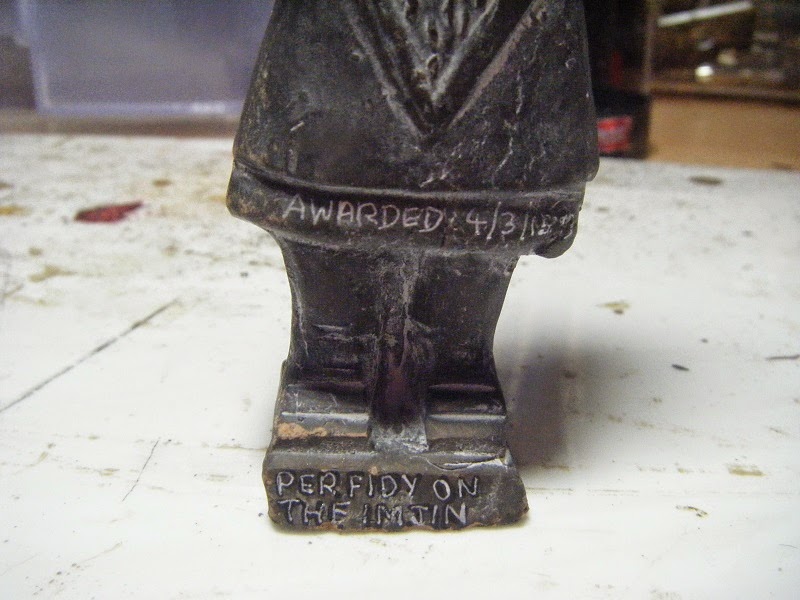 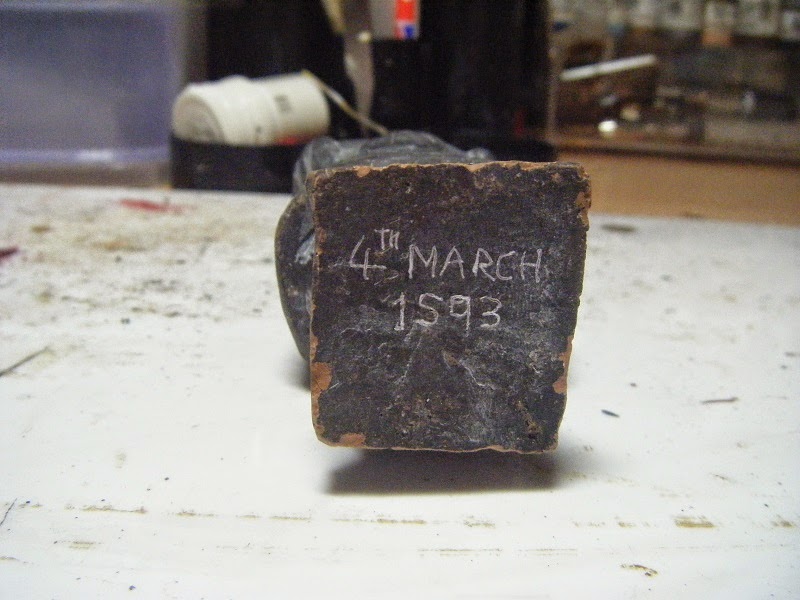 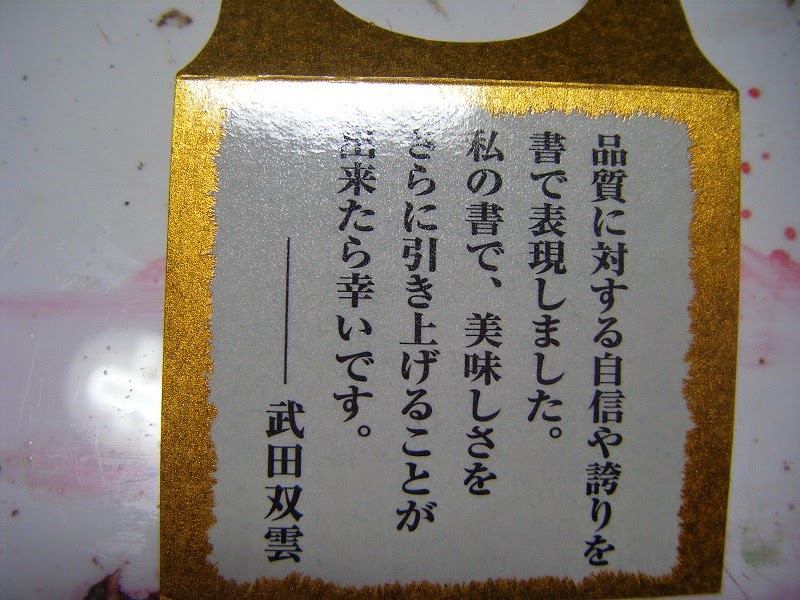 If Gordon writes up his notes of how the role-play points were awarded I'll post them for your amusement.