...so it's just as well I've got the morning off work.

Plenty of progress to report, although it does mean I can't post many pics.

Last night, after getting back from the club I touched up the bases to cover bare spots (the gunk shrinks a bit), painted the base edges, dry-brushed to gunk and then tried something on the generals' bases - puddle effects. That was done by pooling gloss varnish into some dips. I had to repeat that stage a couple of times this morning (OK - yesterday morning now that it's 2am on Wednesday!).

This evening I flocked all the bases of generals, artillery and cuirassiers. I then added some flower and grass tufts to the generals' bases. Once all that was done they got photographed. As I was processing the pics, I spotted that I'd missed the edging on part of one of the standards. A quick touch-up and re-photographing and all was well.

Since then I've been working on the dragoons and horse grenadiers. They are pretty much done now, with just touch-ups and some detailing on the drums to do in the morning before I head off to work. In the evening I'll be able to varnish them and hopefully stick them on their bases. Thursday evening should see the bases gunked, then I should get them dry-brushed and flocked on Friday, allowing me to submit the whole batch as one for my Saturday posting slot.

Here's a pic I just took of the dragoons and horse grenadiers. 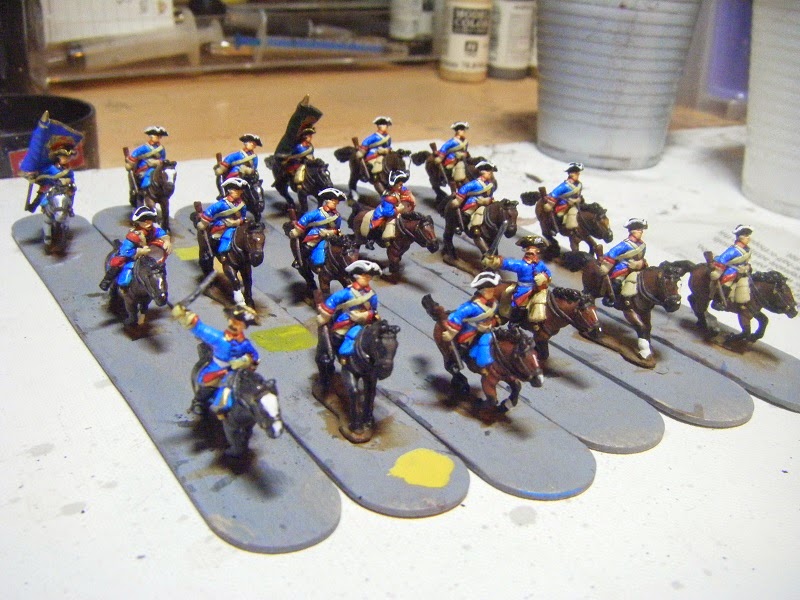 "Hang on a second - one of those standards was red the other day, now it's green. What's she playing at?"

Give that man a fish! Well spotted indeed. Errmm, well, yes. I had originally intended the horse grenadiers to be the Astrakhanskiy regiment. On checking, I discovered that they didn't actually take part in the European theatre during the Seven Years War.

Tomorrow evening will also see me starting work on my next batch of figures. I did come to a decision, but it wasn't one of the ones I listed the other day. I'll be keeping them under wraps until the big reveal on the Challenge blog though. Needless to say, they aren't the Seven Years War infantry!


Oh, yes. You want to know how the game went last night. My NAC platoon quite convincingly trounced Simon's UNSC platoon, mostly down to some extremely fluky dice my excellent tactical choices.

As I won't be posting many WIP pics over the next few days, I'll try to post an AAR to shut you up keep you drooling.
Posted by TamsinP at 02:18