Well, Seb has already posted a batrep of our tournament match on Thursday, but here is my vain attempt to try to salvage some semblance of glory from my ignominous (I think you mean "ignoramus"? Ed.) defeat.

Things didn't start too well for me. I'd prepared a number of possible army lists and pulled out ones that I thought might stand some semblance of a chance, put the rest aside and diced to determine which one I'd use*. Unfortunately the list which was all lancers apart from 2 BGs of light horse entered the mix instead of one of the ones with an "invisible cloak of invulnerability to hits from shooting", errrmmmm, Inspired Commander. You'll recall from my previous post that the Gods of dice decided to curse me, and it was the all lancer army that got chosen.

*I dice "blind" - the sheets are folded in half, shuffled and then the dice are rolled - so I don't know which list is chosen until I open it up.

Then, after a series of tied dice rolls to determine pre-battle initiative, Seb rolled a 4 whilst I rolled a 2, meaning he got to select the terrain. He chose "Developed" for the terrain. Luckily, most of it fell in one corner of my half of the table. Unluckily (don't you mean "stupidly"? Ed.) I decided to base my deployment off that corner.

The Qin Chinese deployment
"Where are all the slaves that dragged that thing here?"

The Sarmatians had brought an even larger banner with them, but no slaves were required to haul it into position. 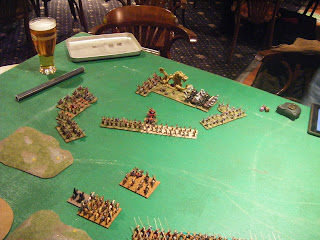 On my left wing, the Sarmatians spotted the biggest glass of ale they'd ever seen and decided to make that their goal. They'd been in need of a good drinking session to get over their defeat against the Classical Indians all week, but the peasants they passed on the march to China never had enough booze to go around the whole army. 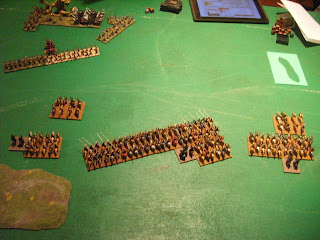 "OK BSB - you make a feint against their medium foot to divert them away from our real goal - the ale!"
"OMG! That is so unfair! These Chinese have brought hi-tech equipment with them to this battle!" 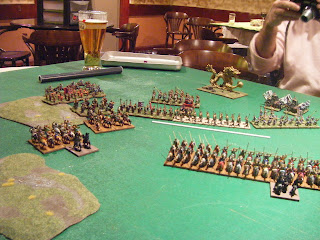 On the Sarmatian left, the light horse take the most direct route to the ale, forgetting that the medium foot to their right have crossbows, making it a 5-dice vs 2 against them in the shooting phase. 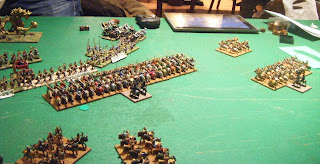 "Meatheads - prepare to charge ............ Meatheads - charge!!"
"Boss, why have they put unpainted wicker fences on the table in front of them?"
"Because Seb hasn't painted them yet"
"According to his blog, he hasn't painted those generals either at this point, but there they are, clearly painted"
"Will you just shut up about whether stuff is painted or not? Those wicker fences mean that we'll be on evens at impact, and their supporting crossbows give them 3 dice per file against our 2 - concentrate on that instead!"
"We do still re-roll 1s don't we?" 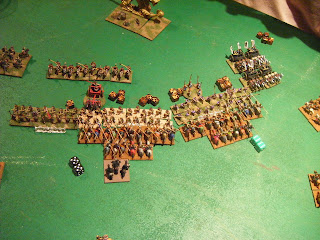 "Hmmm, the impact didn't go too well did it? We've lost 1 base each!"
"I'd be more worried by these dice we've just rolled for melee if I were you!"
"Eeeekk!" 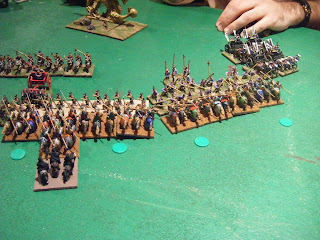 "Weren't there more of us a minute ago?"
"Blame Tamsin's crappy dice rolls" 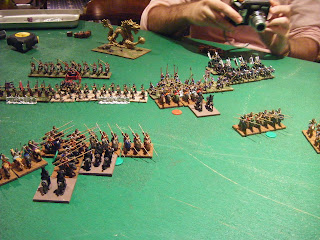 Having bounced off the steady foot, one BG managed to fail it's CMT not to charge, and lost the impact, then crappy dice roll dropped it to fragmented. 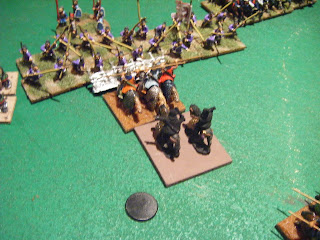 Ooops! Make that "dropped to broken" 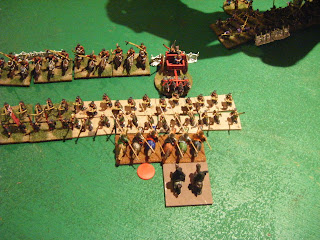 Seeing the Qin medium foot step out from behind their wicker fences (which should actually have been removed at this point), a disrupted BG of armoured lancers tries a do-or-die charge and goes fragmented. Won't be long here before they break and pick up a black marker. 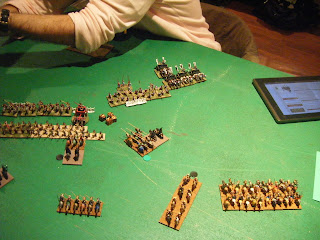 Meanwhile, over on the Sarmatian right flank, Seb's crossbow-carrying chariots have managed to disrupt and then break my light horse in 2 rounds of shooting. How is that possible? Very, very unlucky dice rolls for the Cohesion test resulting in a double-drop.
Still, if the rest of the army can hold on just a few more turns, 2 bases of armoured lancers can plunge through the gap, into the Chinese rear and destroy them piecemeal at leaisure (or at least make a run for the camp and that unfeasibly huge glass of ale!) 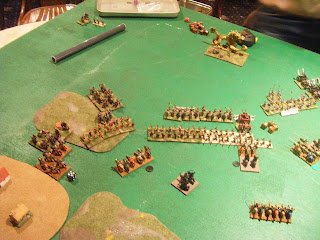 Back to my left flank, where my light horse have charged in against the Chinese light horse (previously disrupted from shooting) and fragmented them.
Ooopps! Too late. That's another 2 broken markers. Add those units to the 2 that auto-broke at some point not shown in these pictures, and that makes an army rout.

The Sarmatian hospital/mortuary preparing to receive additional casualties from the 3 groups that were broken in the final turn.
I always knew that this match was going to be tough, but stupidity and unlucky dice turned the match into an even bigger disaster than the previous battle against Classical Indians.

I've since spotted a couple of things we played slightly wrong, but they wouldn't have changed the outcome a great deal, but might have seen a few bases less in the hospital/morgue!
Posted by TamsinP at 20:07