Lots of shininess has arrived at "Chez Tamsin" this week, mostly for my 15mm "Infamy, Infamy!" project:

I was quite pleasantly surprised to receive the latter package today - just last night I was thinking it was overdue and may have got lost in the post or held up by customs!


The photo below shows everything so far for my "Infamy, Infamy!" project: 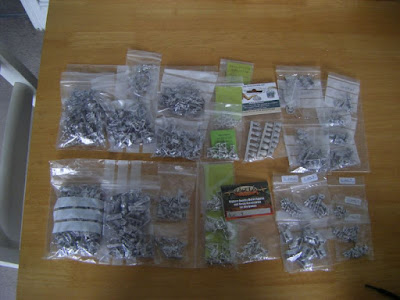 Not that I've had a chance to see what the "Battle Packs" from Lancashire games contain, I will need to place another order with them for a few more packs. I might need to order a couple of extra figures from Donnington as well.

At the moment I'm still trying to decide whether to go with 40mm or 50mm frontage bases. I'm leaning towards the 40mm as I can then also use them for Art de la Guerre. It would also allow me to do a straight inches-to-centimetres conversion for ranges (and to use a smaller board!). As the figures will be multi-based, I will need to make up some dice-cell bases to keep track of fervour/shock and casualties.

I've got plenty of time to decide though - I've still got to prep, prime and paint all of that pile!

After finishing the mini-mart, I decided to take things a little easier this week, so haven't got much to show off. At the start of the week I decided to paint up some MDF markers and a "dashboard" for Chain of Command: 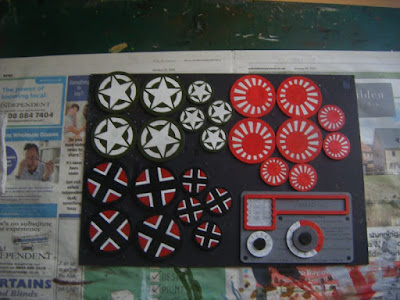 Yesterday I primed some of the Antenociti's Workshop terrain; while I had the airbrush out I also applied the base colours to a few small figures (all will be revealed in a day or two): 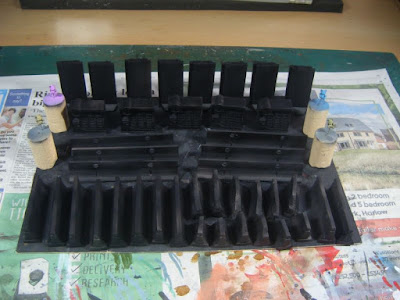 Email ThisBlogThis!Share to TwitterShare to FacebookShare to Pinterest
Labels: Infamy Infamy!, On the workbench, shinies