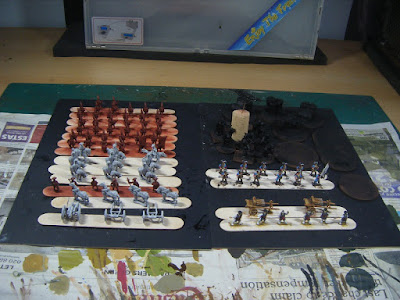 Over the past few days, since finishing the Warlord Games paras, I have got a fair bit done besides writing posts for my "Arnhem 75th" series.

On Wednesday I got the airbrush out and primed a few bits and bobs - the 15mm SYW figures bought at Colours; the Foundry para command also purchased at Colours; some Too Fat Lardies jump off points and some bases that I'd "gunked" on Tuesday. I also made a start on painting some left over 15mm SYW musketeers as dismounted dragoons. I finished painting them and varnished them yesterday, but won't be basing them yet - I need to buy a few more figures (probably four mounted dragoons) to give me two units.

Yesterday evening I painted the 15mm Korean rocket artillery. After this photo was taken, I gave them a coat of Klear/ink; when that is dry I will get them glued onto bases, add the basing texture, paint that and then varnish and flock them.

And then I hall return to painting paras...