As you can probably tell, I have commenced work on painting up the main part of my British airborne troops. Over the past couple of days I have completed painting the first 16 figures, all riflemen: 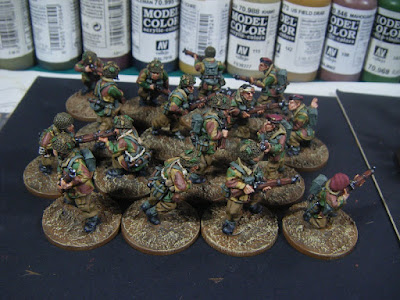 Also in the picture are the rest of the figures from this tray (there are two more trays not pictured; one has a similar mix of figures, the other is all the support weapons and the jump off point markers).


I'll be doing the varnishing steps after I complete each tray, to save me from having to get the airbrush station set up as often. I should manage to complete these by the end of the week.

This batch and half of the figures of the supports tray are being done with Orange Ochre as the denison smock base colour; the remaining figures will have a Denison base of German Camo Beige.

If everything goes to plan, I should have them all painted by the end of the month, just in time for me to add some more to the painting queue!

Just as a quick end-note, as I'm sure someone will ask, the figures are a mix of Artizan, Crusader and Foundry.