With the dragoons almost finished, I decided last week to start prepping the Ming and Korean figures which arrived a week or so ago. The last batch were drying this morning and I'd glued the rest onto painting sticks yesterday, so this morning I started priming them with the airbrush. I got the final batch primed this afternoon. 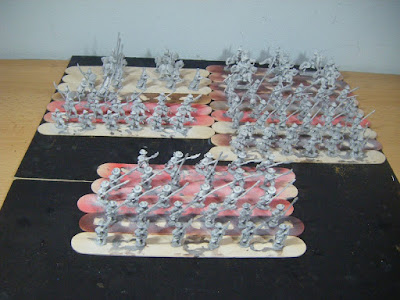 I've got the Ming set up to make two 6-base units of mixed bow/spear units and one 6-base spear & dao unit; they will also cover my infantry needs for a Ming ally force in ADLG. At the back are some spare command figures, mounted generals and enough horse archers to provide 3 units in ADLG (but one base short of a FoGR unit). At the front are the Koreans for the "pikemen" stands, with 5 figures that I had left over from before.

I decided yesterday to take advantage of this weekends "free postage" offer from Timecase and placed an order for enough Ming figures to expand to a reasonable FoGR army and enough Koreans to do six (rather than two or three) "pikemen" bases and two bases of heavy swordsmen.


After doing that priming I decided it was time to prep the 6mm SYW figures I'd bought at Salute. They needed very little clean up, so a couple of hours later they were all done. One batch (half the infantry, all the infantry command strips, all the dragoons) have been washed and are now drying; the remainder (half the infantry, cuirassiers, hussars and artillery) are being washed now and will be dried overnight.


Yesterday afternoon I made up a bulk batch of "almost VMC Khaki Grey" from craft paints. this will be for painting bases and terrain. 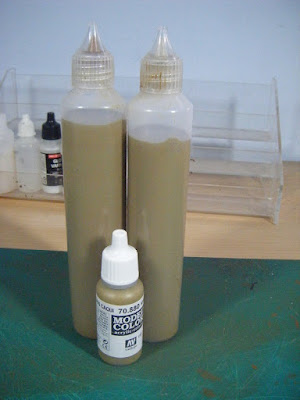 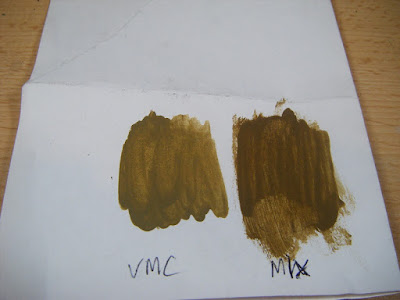 It's close, but needs a touch more of the green, it's also a bit watery. It will do for now, but I might add a bit of green and some acrylic matte medium to thicken it up.

I also spent an hour or so yesterday adding ball bearings to all my Vallejo Model Colour paints to help with mixing them.


I've got the day off work tomorrow so will make a start on painting the Ming.