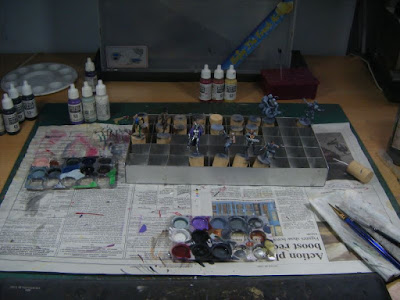 I've been pretty busy since my last post on Wednesday. The photo above (and the ones below) were taken this morning.


As you can see, I'm getting quite close to having painted all of the figures (so far*) in my Judge Dredd collection.

* I will inevitably be buying more and I do have some metal figures (the old Foundry range and a couple of metal versions of the Warlord figures that I acquired) to paint at some point. Oh, and I might have ordered a few figures in the last week or so...


A couple of orders that I'd placed have arrived since Wednesday. On Thursday I received this lot from TT combat: 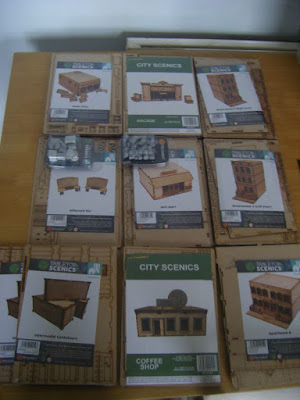 And this morning I received a package from Antenociti's Workshop - I was a bit surprised by that because:
a) it was delivered just before 10am and the postie doesn't normally deliver here until the afternoon. Also I hadn't realised that Saturday deliveries had resumed.
b) it was only dispatched yesterday!


On Thursday I decided to prep some of the MDF kits: 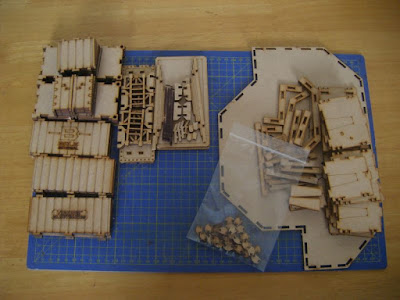 The pile on the right of the photo is a sci-fi cantina kit from TT combat which I had (mostly) removed from the sprue a couple of weeks ago. The other piles are the shipping containers and billboards which had just arrived.

Yesterday I took a little time away from the painting bench to do some spray priming. I forgot to take pics of everything that got primed though. Some of it had been sitting around for months waiting to be done. One lot that did get done were the inner faces of the shipping containers, which I gave a good coat of matt black (Poundland special) as I wouldn't be able to do that after assembling them. 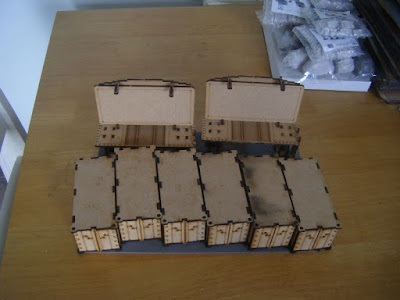 Last night I assembled the shipping containers and the billboards while watching TV. My plan is to spray prime them tomorrow along with a few other things.

Update on the Judge Dredd figures

You saw the caption suggesting that there were four figures which I might finish today? Well, I finished those and also another! 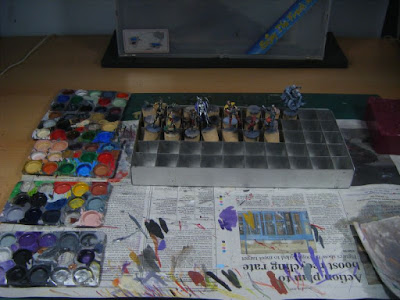 Tomorrow morning I'll do the varnishing (and for a few apply a blacklining wash) and get them based.

That just leaves the special edition Dredd vs Death figure to paint, but I might leave that for a little while and take a couple of days over the painting. In the meantime I will have lots of terrain to prep and paint.