Having finished painting all of the models in the range some months ago, this morning I figured it was about time that I actually played a game with them. So, out came the rules for a quick read before setting up a scenario.

I decided to select Johnny alpha and Max Bubba as the respective team leaders. Rolling to see who would be the protagonist, Max scored a 2 against Johnny's 1.For the mission type, I rolled a 4 - Assault, then a 5 - Seize. A further roll of 2 gave the encounter type as a stakeout. Checking the Seize mission, I rolled a 3 meaning the target was a Traitor (comes with a quality hand blaster - I choose the High Power upgrade).

Recruiting teams to 50 Notoriety I get: 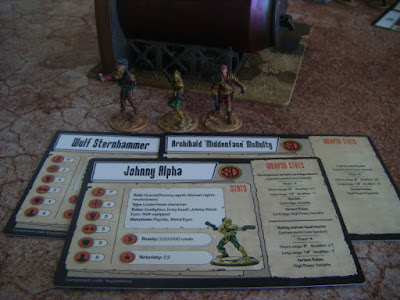 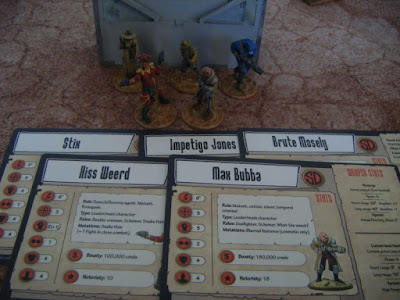 
Armoury cards - I dealt out 6 cards for each leader, then selected three each. Johnny has a special rule that allows him to keep 1 extra armoury card.


Chicanery cards - each leader was dealt 3 cards. Max Bubba has a special rule giving him an extra chicanery card, so a fourth was dealt for him.


"Jimmy Quickhands has turned fink and wants to spill the beans on Max Bubba's plans. Johnny Alpha has been despatched by the S/D agency to collect him from the planet Drongo, where he has turned himself into the local Marshall's office."

"Max Bubba has tracked him down and brought his team to the hideout where the Deputies are handing him over to Alpha."


With all of the pre-game housekeeping done, I added activation chips to the bag. Both sides had three models with a Cool of 4+, so three star chips were included for each side.

this turn mostly saw characters moving, but there was also some shooting. At the end of his first activation, Wulf successfully returned his star chip to the bag meaning he would get another activation this turn. That came around quite quickly - he moved and shot at the Stix causing two wounds , but this time failed to return the chip to the bag.

The Stix hunkered down behind the platformed-tank and managed to remove one wound. One of the Goons moved up and climbed on top of the triple-tank; the other moved up into cover at its base. Hiss took a shot at Johnny, who managed to evade.

One of the Deputies climber up the watchtower and took a shot at the Goon on the triple-tank, but missed. Brute Mosely shot at Middenface causing 2 hits, but Middenface saved against both but took a stun.

Note - if the number of hits and saves are equal, the target doesn't take any wounds but does take a stun.

The second deputy took a shot at Impetigo Jones but missed. Johnny took a long range shot at Hiss, who evaded; he successfully returned his chip to the bag. Impetigo Jones returned fire on the deputy, but also missed.

Johnny activated again and used a Hunker Down action to drag Wulf into cover and played the Medipac card to heal all his wounds. Jimmy Quickhands (the traitor) took an aimed shot at Hiss, but missed.

Note - an Aimed Shot is a double action and the player can either add 1 die to the initial to hit roll or to the Power if he does hit.
Correction - it's +2 dice, which might have made a difference to the game.

Max Bubba moved twice, then failed to return his chip to the bag. Middenface aimed at Brute Mosely but missed, then Johnny activated again, climbing the ri-tank and taking a snapshot at the Goon on top - 3 hits, no saves = 1 dead goon. 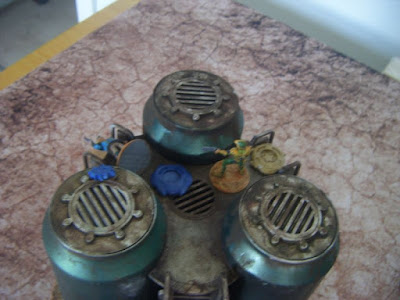 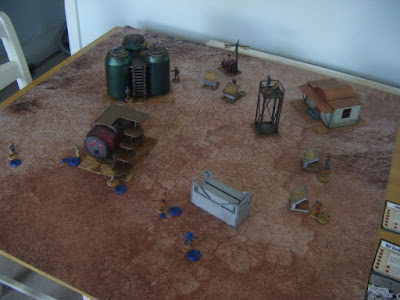 Johnny took an amied shot at the Stix - 2 hits, 2 saves so just a stun - and successfully returned the start chip to the bag. The next chip out was a star chip, so Johnny took another aimed shot - 3 hits, no saves, the Stix was down! 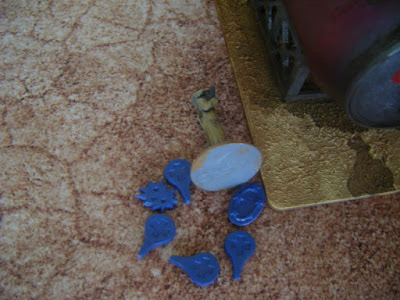 Sadly, Johnny didn't manage to return the chip this time.

The Deputy on the watchtower took another aimed shot at Hiss, who evaded into cover - being out in the open in a bright red outfit was obviously making him a target! The other Deputy moved and took a snapshot at Impetigo Jones, only causing a stun.

Hiss moved up behind cover and took a shot at Middenface - 2 hits, 2 saves caused a stun. Jimmy Quickhands circled round behind the triple-tank, out of sight of any of Max's gang. Max made a double move up to the triple tank, then Brute Mosely decided to give up on shooting and charged Middenface. The impact was brutal - 3 hits, no saves - Middenface was down!


Impetigo Jones missed another aimed shot at the Deputy on the tower; the remaining Goon slipped forward and took a shot at the now-recovered Wulf, who managed to evade it. Severely annoyed, Wulf opted to charge the Goon, inflicting 1 wound and a pin.

Hiss moved out from behind cover and managed to return his chip to the bag. The Goon removed his pin and then moved away from Wulf - nobody wants to be in striking distance of an enraged Viking!

Brute decided that this charging lark was fun and decided to do it again, taking out the nearby Deputy. 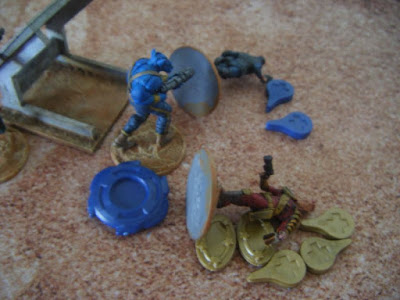 Hiss took an aimed shot at Wulf - 2 hits, 3 saves, no effect - and again managed to return his chip. The Deputy on the tower took another aimed shot at Impetigo Jones, inflicting another stun.

Like Brute, Wulf decided that charging people was "most good fun, my old cucumber" and launched himself at Max Bubba - 4 hits, two saves = 2 wounds on Max.

Note - Wulf gets a base of 4 dice for his Fight stat, plus 1 for charging and a further 1 for "der happy stick, ja?".

Hiss moved into a better position and took another shot at Wulf - again 2 hits, 3 saves, no effect. This time he failed to return his chip to the bag. Impetigo Jones chose to use both his actions to remove the Two stuns he was carrying.

Jimmy Quickhands moved into close range and took a snapshot at his old boss, Max, from behind - two more wounds took Max down. 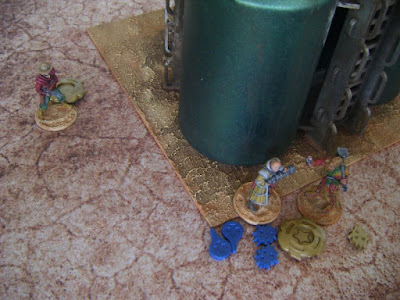 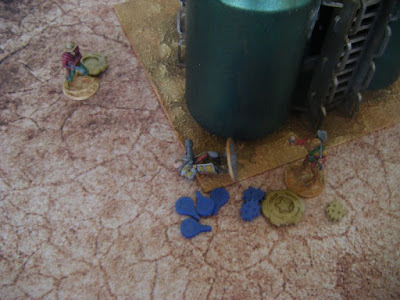 Pulling the last chip, Johnny removed his pin marker and dropped down from the triple-tank. 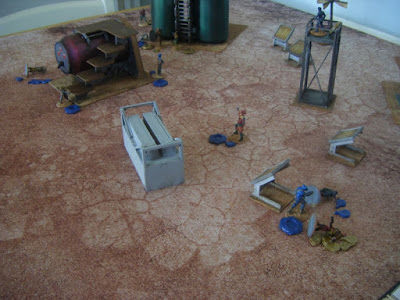 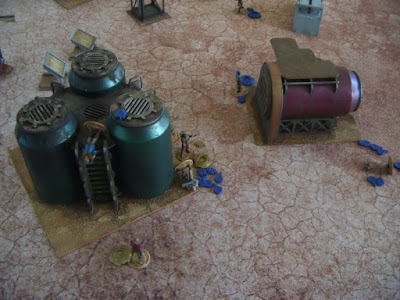 The surviving Deputy took two shots at Hiss from the tower - the first hit causing one wound, the second missed. Jimmy Quickhands moved up to the paltformed tank, ready to shoot Jones in the back. Johnny took an aimed shot at Hiss - 3 hits, no saves - Hiss was down! 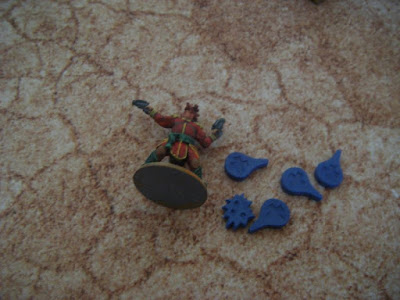 The remaining Goon decided discretion was the better part of valour (besides which, with Max down he wasn't likely to get paid for this job now) and moved into cover.

Impetigo Jones, clearly having hear Jimmy moving up behind him, turned and fired - 3 hits, 1 save - the traitor was down! 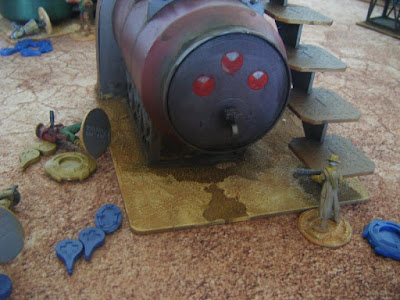 Brute looked for his next target and decided that the remaining Deputy looked tasty, so he moved up to the foot of the tower. Wulf removed his pin and moved up to the platformed tank. 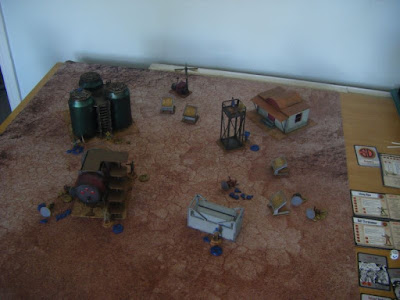 Note - at this point with the Traitor down and over half of Max's gang down, the game should have ended. However, I'd missed that item and carried on to the bitter end.

Aware that Brute has reached the foot of the tower, the Deputy up top leans over and takes two snapshots - the first causes 1 wound, the second misses.

The Goon moves into short range of Wulf and shoots, but misses.

Wulf charges Impetigo Jones - 3 hits, 3 saves, just a stun. Jones doesn't fancy staying in the Berserker's swing and moves away as far as he can.

Johnny passes a cool test to remove his pin then moved into close range and shot at Brute Mosely - inflicting 1 wound.

Brute chose to hunker down in cover away from the tower, but didn't manage to remove either of his two wounds. 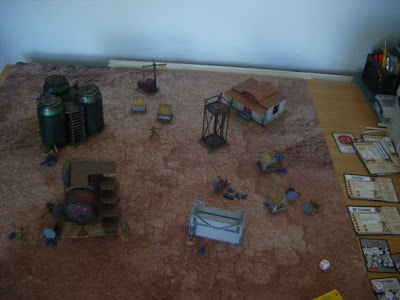 Johnny passed his cool test and removed his pin, moving up and shooting at Brute again - 2 hits, 1 save - Brute was down! 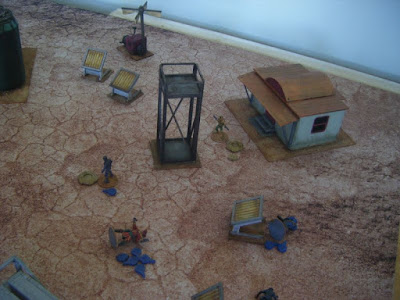 With the coast now clear, the Deputy climbed down from the tower and moved towards the remaining action.

Note - as Wulf was carrying 1 stun marker, his Fight stat was reduced to 3 for this attack (plus 1 for charging, plus 1 for "der happy stick"). 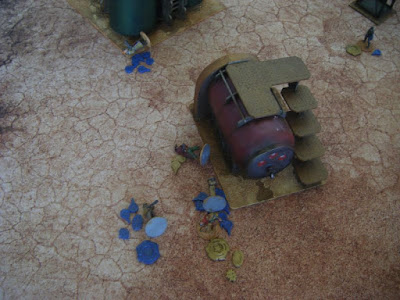 The Goon shot at the Deputy causing 1 wound.

The first chip out of the bag was a star chip (well, there was a 50:50 chance of that happening). As Wulf was in charge range of the Goon, it would have been rude not to let him continue his berserker rampage so in he went - 2 hits, 1 save - the Goon was down, leaving just Johnny, Wulf and one deputy standing.


Just for fun I decided to work through the post-game process as if this was part of a campaign.


Effects of Wounding
The first job was to determine the effect on any downed characters.

Bounties, Collateral and Medical Expenses
As the Traitor was taken out, the 500,000 credit reward gets split equally between the two sides, so 250,000 credits each.


My thoughts on the game

It was rollocking good fun and certainly played out like many of the stories in the comics. For a first game it was perhaps a bit over the top - it would probably have been easier with smaller gangs (and would have taken less time). Including set up and a break for lunch, the game played out over about 4 hours. Stopping to take photos, make notes for this AAR and checking rules probably doubled the playing time.

The activation system worked well and the chance to return the star chips wasn't overpowering - most attempts failed and there were only the two times that a character got three activations in a turn.

Weapons weren't overpowered, in my opinion, but close combat attacks were mostly quite brutal.

I'm not sure how these rules will transfer over to he Judge Dredd game where (typically) two Judges would be facing off against seven or eight (admittedly much weaker) opponents. The risk of taking a pin for failing to return a star chip could be very dangerous for them as they won't be able to use their reaction abilities (Gunfighter, Brawler) if pinned. One of the designers has suggested an alternative where instead of taking star chips, the Judges put a number of normal chips equal to their Cool into the bag; for each activation after the first they test against Cool to see if they get one or two actions.