As the August Bank Holiday was the nearest date we could get to the 260th anniversary of the Battle of Kunersdorf, we had decided to do a re-fight at the club (hence my recent painting splurge to finish all the Russian line regiments for my collection). Historically, this was Freddy the Great's worst defeat. It took place shortly after the Battle of Palzig (aka Battle of Kay).

Following their win at Palzig, the Russians under Saltykov had continued their advance toward Frankfurt an der Oder, reaching Kunersdorf on 30 July. On 8 August they were joined by an Austrian corps under Loudon. The army was assembled on a ridge of hills to the North of the town and set about fortifying their position.

Meanwhile, Freddy had gathered an army of about 49,000 men and marched to meet them. Having reconnoitred the Russian positions he planned to repeat his tactics at Leuthen, feinting with a small force from the North whilst bringing the main part of his army through heavy woodland to the East to strike in force at what he believed was the soft rear of the opposition. However, when the Prussians emerged they discovered that Saltykov had outguessed them and they were now facing a well fortified front line.

Following a preliminary bombardment, the Prussians launched their initial attack against the Muhlberg on the Russian left flank held by Suvalov's Corps of Observation, who having borne the brunt of the bombardment finally broke under the weight of the assaulting Prussian grenadiers.

Freddy then turned his attention to rolling up the Russian lines. Unfortunately for him, the time taken to bring up artillery and fresh troops onto the captured Muhlberg also allowed time for Saltykov to redeploy troops and guns to defend against this threat. With the first Prussian wave defeated, and his generals imploring him to retire and attack again the following day, Freddy took a gamble and ordered Seydlitz's cavalry to cross the streams and attack the battery on the Grosser Spitzberg.

The cavalry fought hard but unsuccessfully. They finally broke and routed when Russian and Austrian cavalry charged into their flank.

Freddy's left wing infantry then attacked and captured Kunersdorf and went on to assault the Grosser Spitzberg. Saltykov had reinforced this position with regiments from further along the line; in places the Russians were 4 or 5 lines deep. the fighting was brutal and the Prussians were taking very heavy casualties and becoming exhausted.

Platen tried to widen the combat by sending his cavalry to try to take the Russians from behind - their charges were repulsed by artillery fire.

It was that at this point that Loudon brought forward the Russian and Sustrian cavalry reserve which hit the left wing of the Prussians, breaking and routing them. the Prussians fled North along the Kuhgrund (the defile between the Grosser Spitzberg and the Muhlberg)., abandoning some 160 artilery pieces. During the flight and pursuit, Freddy was nearly killed by a shot and also nearly captured by some Cossacks - they were driven off by the Zieten hussars.


But that's enough of the blather, on with pics (and some commentary).


I actually arrived very early and had quite a long wait until Mike and Stan arrived around 1pm. We got the tables set up, then while they were laying out the terrain I took the time to organise the Russians into their various commands (divisions, lines and brigades). Whilst doing this I discovered that somehow I had missed packing 3 of the musketeer regiments. Luckily I had packed 2 converged grenadier regiments that weren't needed and had a unit-width marker that could be used to replace them. When the terrain was in place, I started deploying the Russians; Mike deployed the Observation Corps, his Cossacks and the Austrian reserves.

Elliot and Peter arrived while we were doing this. The Prussians were then sorted out using hte regiments brought by Stan and Elliot, along with some Hessians from Mike which could substitute for anything which was missing.


The Prussians had first turn and began with their preliminary bombardment of the Russian left wing (the Observation Corps on the Muhlberg). This proved more effective than historical events and nearly half the target units were eliminated, despite being behind fortifications. Mike redeployed their second line units into the vacant front line slots in our first turn. The fighting at that end went on for several turns until the Muhlberg was overrun. the Prussians then had to cross the Kuhgrund and assault the Russians on the Grosser Spitzberg.


Meanwhile, over on my wing, the Russian cavalry started a long, long march around the end of the line to (eventually) occupy the field in front of the centre divisions. After about 15 of our turns (nearly 3 hours of moving), they were sorted out and in position to either attack or defend against the Prussian cavalry. As Stan chose not to follow what happened historically, it was down to me to attack him across the stream.

The fights dragged on for the rest of the game until we called it at 8pm. I think we must have played somewhere in the region of 25-30 turns for each side. The Prussians had caused many more casualties and captured the town and the Muhlberg, but had ground to a resounding halt against the main Russian infantry. They were also not doing well against the combined Russian and Austrian cavalry. We therefore decided to call it a draw, but if the game had continued the Prussian cavalry would very shortly have been overwhelmed and my Allied horsemen would have broken through into Freddy's rear.

Enough of the description, now for the pics (some of them a bit fuzzy and shaky). Apologies for the darkness - it was a very warm day and we opted not to have all the lights on so as not to add more heat to the room. 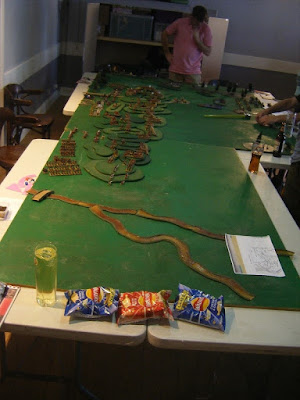 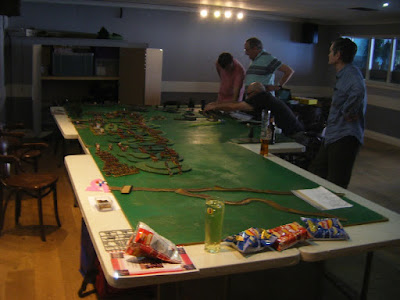 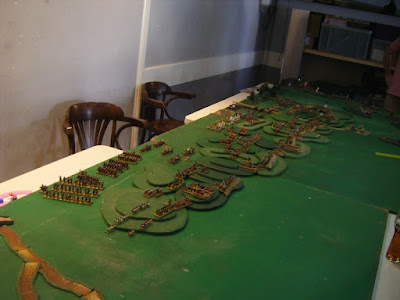 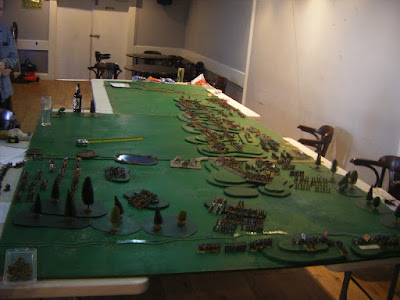 After a few turns: 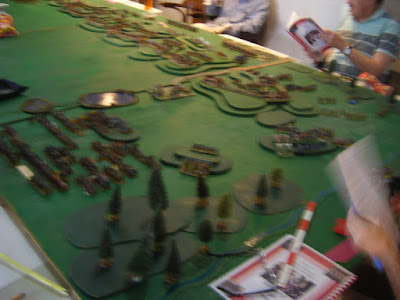 Well, the Austrian dragoons refused to charge those cuirassiers and were then charged themselves. I was able to reinforce the melee with both of those Cossacks , hitting the cuirassiers in the flank and rear. Minced Prussian anyone?


However, the Russian cuirassiers and horse grenadiers opt not to charge at this point.


All in all, it was a great afternoon (and early evening) of gaming. If we had been able to continue, the outcome would probably have followed history as my cavalry was now across the stream and threatening the Prussian left flank and rear. We also had a crap load of fresh infantry regiments to pout into the fight (Albeit that they would have taken a long time to redeploy).

One thing I did discover is that I need some more Russian commander bases - I didn't have quite enough to represent all of the line, division and brigade officers. That's easily solved with purchases at Colours in 2 weeks' time!
Posted by TamsinP at 17:53