aka the hitmen you hired all failed!

It has been rather a long time since I posted last, mostly because I haven't been doing anything hobby-wise since Salute. Until today, that is.

The other day, someone on the club's email group was proposing a multi-player Gaslands game. Just over a year ago, I had painted up a bunch of cheap cars with the intention of making some junkyard terrain pieces. But, inevitably, never got around to doing so. Today I finally made a start on doing so.

As well as the cars, I had cut a bunch of EPVC bases. I glued most of the cars onto these (leaving a few loose, to be added on top of piles later). I then left them for a couple of hours for the glue to cure. It was at this stage that I realised a big mistake I'd made - on the multi-car bases, I should have pre-textured or at least painted the central areas so that white didn't show in the gaps between cars. Oh, well.

I made up some basing gunk - a mix of brown acrylic frame sealant (from Poundland); some bird sand and a little bird grit (both from Wilko) and a splash of water to help make it a little more fluid for spreading. And then I got on with the job of adding gunk to the bases, including in the narrow gaps.

And here's the workbench after all that was done: 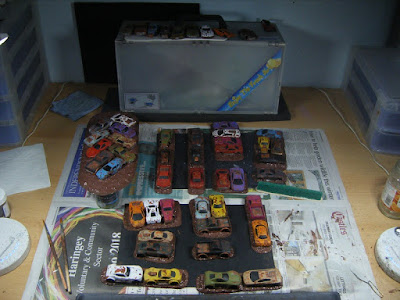 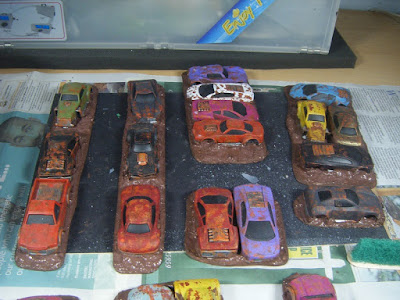 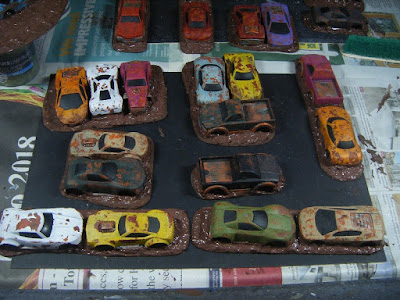 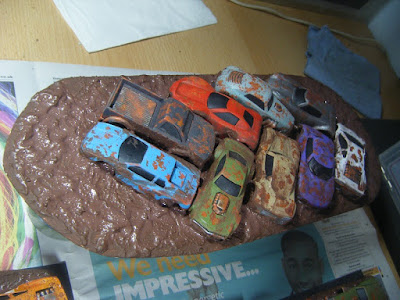 I also decided to test glue a strip of scouring pad onto an old painting stick (aka tongue depressor) to see how well the glue would hold it: 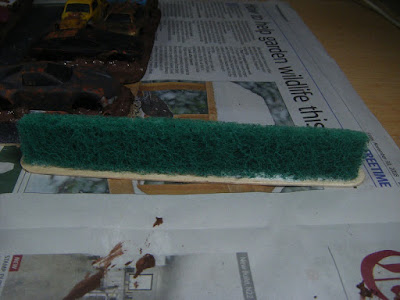 The plan is to make up a bunch of hedges for the club's terrain box. If this glue holds the strip firmly, I'll cut a load more and get them glued to sticks, trim them unevenly, add basing gunk, hit them with brown spray paint  and then flock them.

Tomorrow is a bank holiday in the UK, so my plan is to join in a big game of King of the Battlefield at the club - my Russians deserve an outing, having missed the games earlier this year. Of course, that means there won't be any progress on the terrain until Tuesday.