As I'm mostly in the midst of doing figure prep, there is no overall "on the workbench" photo today.

Since Friday's post I have done a little bit of work apart from prepping figures. I used up the last of my basing gunk mix (I've since made up a new batch) to coat a bunch of bases: 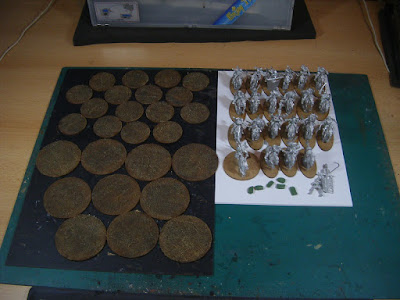 After painting them, I took the 75mm ones and added some cushion stuffing using hot glue, then airbrushed them with various greys and finally white before touching up the base edges where there had been overspray: 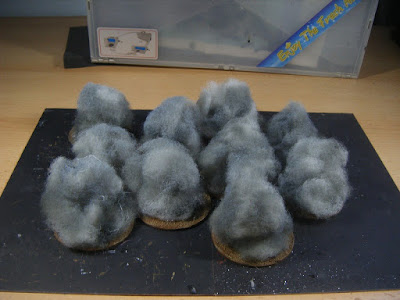 Et, voila! A good load of smoke markers for Chain of Command. My plan is to use the 50mm bases to make barrage markers.

In the first photo you will have noticed the cavalry alongside the bases. Here's a better shot: 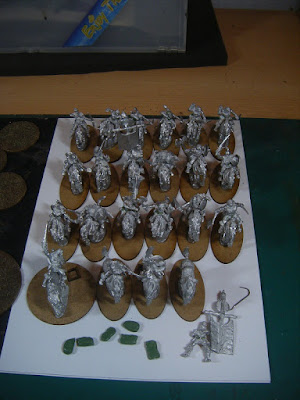 All the barbarian cavalry have been assembled. Most of them came as separate torsos and legs and I'd spotted during dry-fitting that there would be gaps so I decided to use a small amount of greenstuff to attach the two parts - the excess squeezing out would fill the gaps. Since taking that photo, I have fixed the broken standard using a length of steel paperclip and greenstuff. I will need to buy some nails to mount them on for painting (I thought I had some, but couldn't find them). I was a little concerned about how strong the bond would be, but I needn't have worried - it's strong.

There was a bit of greenstuff left over, so I made some sandbags.

No photos today! I have finally decided that I will be mounting them on acrylic bases once they're painted so have been removing their integral bases and drilling holes for pinning them. I've also cleaned up the metal figures. I'm a little disappointed with the special edition "Dredd vs Death" miniature - there are quite big gaps which will need to be filled. I've also removed the integral base of this one so that I can mount it on another one.

Now I just need to decide what thickness of acrylic bases to go with.

Some goodies arrived this afternoon: 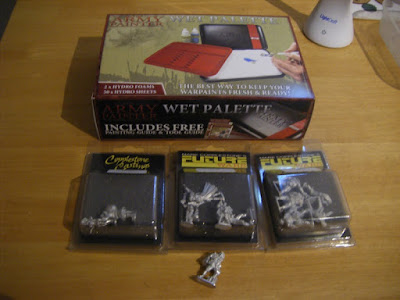 You might be able to see what the figures are, but I'm not going to provide close-ups or identify them just yet - a couple of them will be for a very early entry in the Challenge.

As for the wet palette, I had decided to give one another go and was looking at the ones from Redgrass games when I saw the Army Painter one being advertised - it was slightly cheaper, so I went ahead and ordered one. I have used a wet palette in the past, but wasn't happy with it - it was one designed for use with thicker artist acrylics. These new ones have been designed for use with model painting acrylics - we'll see how it goes. My main concern is about the size - I'm not sure how many colours (and mixes) I'll be able to fit on there at the same time - hopefully enough for painting the Dredd and Stronty figures.

Email ThisBlogThis!Share to TwitterShare to FacebookShare to Pinterest
Labels: On the workbench, shinies